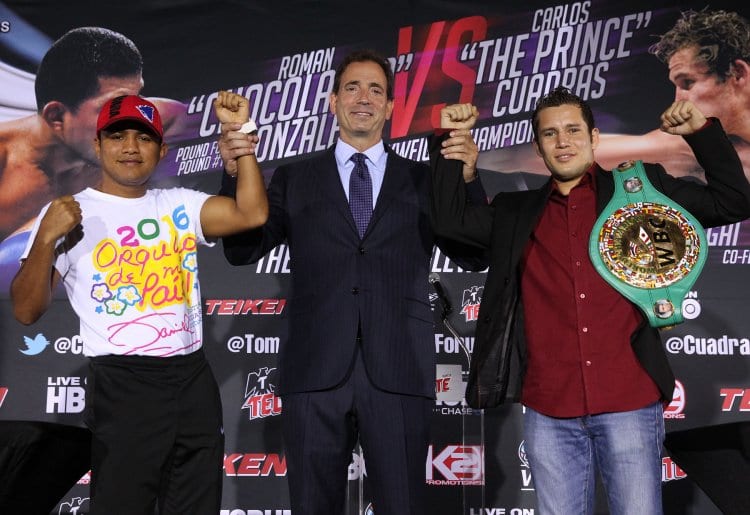 Gonzalez will be moving up in weight to challenge for another world title in his fourth weight division. The two undefeated combatants have an extraordinary combined record of 80-0-1 with 65 knockouts.

Also as the press conference was fan favorite Jesus “Renuente” Soto-Karass, (28-10-4, 14KO’s) who will face off against Yoshihiro “El Maestrito” Kamegai, (26-3-2, 23KO’s) in a highly anticipated rematch of their epic 2016 “Fight of the Year’ candidate this past April 15 at the Belasco Theater in Downtown, Los Angeles which was scored a draw.

The ten round super welterweight clash will serve as the chief support to the main event. Both fights will be televised live on HBO World Championship Boxing beginning at 10:00 p.m. ET/PT.

“I have confidence in God and with the support of the Nicaraguans, Mexicans and Americans, I’m honored to headline my first show at the Forum and look forward to all the fans support.”

“It’s a blessing to named the #1 Pound-for-Pound Fighter and its motivation to keep training hard.”

“I’m very happy to train in Big Bear with Gennady Golovkin, the conditions up there will provide the best preparation for the fight.”

“It means a great deal to me to win a fourth world title and I dedicate this fight to the memory of my mentor and hero Alexis Arguello.”

“Thanks to “Chocolatito” for coming up to my division and taking this challenge. This fight will provide fireworks, it will be a war and this title is coming back to Mexico.”

“I invite all fight fans to come out. This fight, for those watching on HBO and those coming to the forum, will be a great event. I will leave the platform very hot for Chocolatito and my country man in the main event.”

“We’re excited to return back to the Forum and work together with their terrific staff on this outstanding event on September 10. We were just here at the end of April with “GGG” and “Chocolatito” in a sold-out show and now “Chocolatito” is headlining his own show.”

“This is the first time that “Chocolatito” has been on HBO as the challenger as he is moving up to his fourth division to face Carlos Cuadras.”

“Great fights such as “Chocolatito” versus Cuadras happen because great fighters want them to happen, in this case two champions in their respective divisions seeking the toughest challenges. Two undefeated champions willing to get in the ring for the fans to prove who’s the best.”

“This fight is a testament to the history of the Forum when they were known for having so many great fights featuring the lower weight classes. This brings back the glory days when Michael Carbajal fought Chiquita Gonzalez.”

“I give a lot of credit to HBO for this incredible tripleheader featuring the two best Pound-for-Pound fighters in the world on the same broadcast once again.”

“I am proud to be speaking today about a great fight that all fight fans will enjoy. Following their epic 2016 “Fight of the Year” candidate fight this past April 15, at the Belasco Theater in Downtown Los Angeles, Yoshihiro “El Maestrito” Kamegai, and Jesus “Renuente” Soto-Karass, will meet in the ring once again on Saturday, September 10 for a highly anticipated re-match from the Fabulous Forum in Los Angeles.”

“The 10-round super welterweight fight will be the co-main event to the world championship clash between Roman “Chocolatito” Gonzalez and Carlos “Principe” Cuadras and is presented by Golden Boy Promotions and Akihiko Honda’s Teiken Promotions.”

“In their first bout which ended in a split decision draw (97-93, Kamegai, 96-94 Soto-Karass and 95-95), Kamegai and Soto-Karass delivered an all-out brawl which had fans packed into the Belasco Theater with a special viewing room opened to accommodate the demand.”

“I want to thank HBO for giving us the opportunity and Akihiko Honda and Teiken Promotions for helping us put this fight together again for all the fans to enjoy. Lastly I would like to thank Tom Loeffler and K2 Promotions for inviting us to be part of this great event.