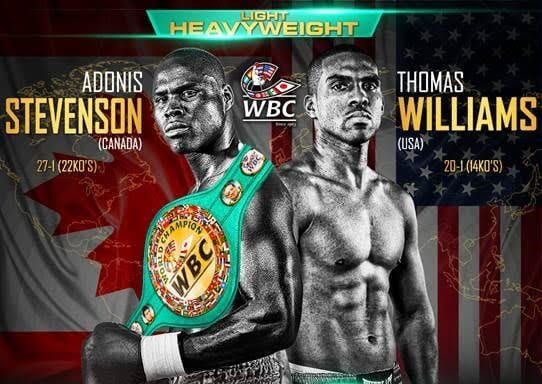 ”Welcome to Québec City Thomas. I saw your fight against Edwin Rodriguez. It was a nice performance with a beautiful KO. When I saw that bout, I told myself I wanted that fight with you. I knew I was going to be motivated.”

”I know Williams hits hard and that he has a name now in the United States, but I keep the same Kronk Gym mentality Emmanuel Steward taught me: we go for the KO. It is also my daughter’s birthday and I want to get her a KO, I am motivated. That will be exciting…don’t blink!”

”You don’t know what I have been through to be here. Tweets, talks and predictions won’t mean nothing Friday night…..facts will. There will be a new champion.”

”With only a 10-day notice, I am really happy to face a fighter of good caliber. Berridge is a tough guy who faced good names like Thomas Oosthuizen and Blake Caparello, but I prepared really hard for Chad Dawson. I am ready.”

Robert ”The Butcher” Berridge – New Zealand light heavyweight champion :
”I am excited to be here and to face a solid boxer. Expect a good performance from me Friday.”

‘The event is called ‘SHOOTOUT’ because of the aggressive style of Thomas Williams Jr, who fights like there is no tomorrow, combined with the explosive power of Adonis Stevenson.”
”Williams is a clear and present danger but we are convinced that Adonis is well prepared and will succeed, so that we will all be happy Saturday morning while eating breakfast. We still have not seen his full potential yet.’

”The fight between Eleider Alvarez and Robert Berridge is really important for the rankings in the light heavyweight division. Alvarez is highly considered by all the independent rankings (The Ring, BoxRec) and Berridge was already in training before the withdrawal of Chad Dawson, because he was supposed to fight on HBO PPV last weekend before the bout was cancelled for administrative reasons. He is fearless and a hard hitter.”

Tickets for the “SHOOTOUT” event, jointly promoted by GYM and Gestev and presented by Vidéotron, in collaboration with Mise-O-Jeu, start at $50.00 and are on sale and available to purchase at www.ticketmaster.ca, the Videotron Centre Box Office, calling GYM at (514) 383-0666 and the Champion Boxing club (514) 376-0980, or by dialing 1-855-790-1245
Tags:Adonis StevensonEleider AlvarezGympressPress ConferenceShootoutThomas WilliamsTop DogYvon Michel