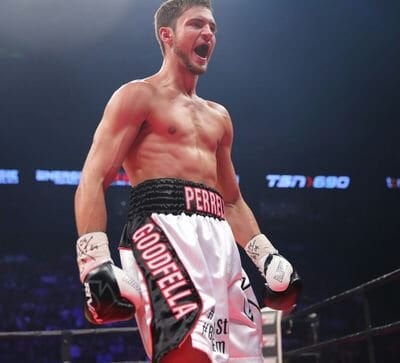 So the guy I was supposed to fight tonight (Yordenis Ugas) won his fight against another prospect. Perfect We have Unfinished Business!!

We will forgive the grammatical error of the multiple capitalization of Bryant Perrella as it appears he might just be excited for a future bout with former Olympian Yordenis Ugas. Ugas, who was suppose to fight him on ESPN on Friday, upset Jamal James, a very tall welterweight, whom some saw as a future champion.

Ugas who won by a wide margin revitalized his career that had hit a low and saw him coming in as the b-side against top prospect at this point.

Perrella, who the New York State Athletic Commission declined for this bout due to a thumb injury, took to Twitter to make his case for the bout. In the tweet listed above, Perrella referred to bout with Ugas as “unfinished business”

Below is Bryant Perrella explaining his injury to Lukie of ITRBoxing.com.