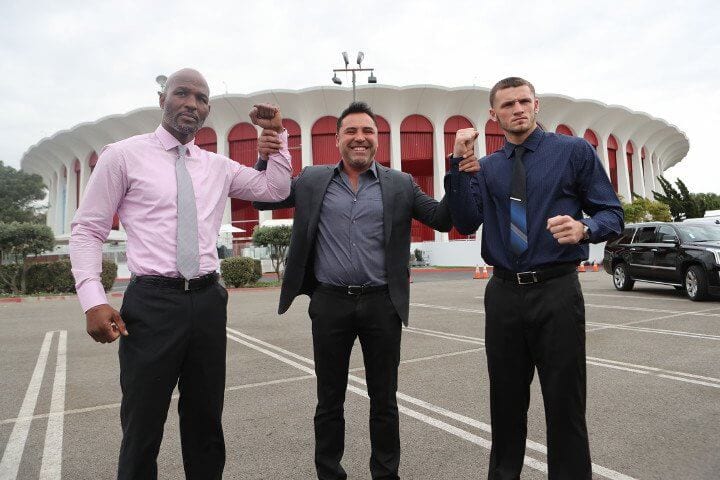 Below is what the fighters, their trainers, managers and promoter had to say at today’s press conference:

“This is history, we have been here many times where history has been made. This is obviously different than everything I have ever done, because it is the Final 1. To be able to have the Final 1 in LA, where the city of stars are trying to be stars, however you cut it, it couldn’t have been better with the history placed in the DNA that the Forum has produced.

“It is fitting that the end of a twenty-nine year career, since 1988 is in a historic place at the Forum in Inglewood, CA. This is something that came as an opportunity to be here. I couldn’t tell you that it would be in this arena-it just happened, and here I am against an incredible opponent.

“I don’t want anyone to say Joe Smith Jr. gave me anything-give me an opportunity and give me a door and I’ll open it myself. I don’t’ have to convince anyone of anything. This is not emotional. What I am going to do is show you why I have been named three different names in boxing from “The Executioner” to “B-Hop” to “The Alien” they all exist in me.

“On December 17th you will see “The Executioner,” it will all come full circle. This press conference is just a warm up. Win, lose or draw, there is no excuse-Final 1.”

“I’m so glad I was chosen to fight Bernard Hopkins in his final fight on December 17th at the Forum. I’m going to train very hard for this fight and take full advantage of it. I’m looking forward to putting on a great show for everyone.”

“As you know, we are calling this the “Final 1,” and Bernard has expressed this is the final one. We are really excited to be putting together this card. We want to thank HBO for putting this card together.

“December 17th will be historical. I want to say coming out party, but it will be the last hoorah, as a champion goes out in his terms, in his way. Only legends can do that and superstars who transcend the sport.

“What excited me about this fight is that Bernard is not fighting someone who is a walk in the park, he is fighting a difficult fight, and this gentleman has every opportunity in the book to win and win a world title. This is Hopkins, this is who Hopkins chose. Joe Smith Jr. has an amazing record and an outstanding knockout percentage that is unheard of in his division.

“Hopkins will be an athlete that will transcend the sport, not just for what he has accomplished in the ring, but for outside of it, and that is huge. I am very excited and happy that this fight will be taking place in an arena where I began my professional career. It is an honor for me and thank you for giving Los Angeles and Angelenos an opportunity to watch this fight.

“Leading up to the event, we have some great events coming up. The annual Oscar De La Hoya Foundation Toy Giveaway will be taking place the day of the fight. We want to get the community involved, not only because yours truly is from here and I began my career here-but because we are celebrating a legend, such as Bernard in a way he should be honored.

“Part of the festivities leading up to the December 17th fight will be a card on December 16th on HBO Latino at one of the best casinos in California, Fantasy Springs Resort Casino,

“At Golden Boy, we are very proud to grow our young fighters. Rios vs. Tapia wasn’t an easy fight to make, because we have developed these fighters, but you have to make great fights for the fans and this will be an exciting fight to watch

“On December 16th, I think it is best to promote one of the best divisions in boxing today, the middleweight division. I acknowledge Jason Quigley, who is here today as an undefeated middleweight fighter.

“The main event fight on December 16th has a potential to be a Fight of the Year candidate, in a very hot division-light heavyweight division. Ever since I saw Shabranskyy, who I nicknamed ‘Chingonskyy’ I have seen something in him, with his finesse in the ring. He is a very special fighter and he is facing an experienced, durable fighter in Sullivan Barrera.

“Thank you to our sponsor, Tecate. I am proud to announce that Tecate will be sponsoring boxing in a whole new way in 2017, everyone will be blown away by how they will bring boxing to the next level.

“What makes Bernard Hopkins is that he doesn’t stop, he keeps going and surprises people. He would continue until he was 60 if he could, that’s what a legend is, he takes care of himself and keeps going.

“It is certainly great to be here in LA at the Forum where so much history has been made. This fight was really easy to male, and that is a testament to Bernard Hopkins, because most fighters would shy away from a puncher like Joe Smith Jr. It is an honor and I thank Bernard and Oscar for taking this fight.”

“December 17th is our last broadcast of the year, and it is very special because it is the last time we will see Bernard Hopkins in the ring. This fight will be Bernard’s twenty-third fight on HBO, tying him with Lennox Lewis in appearances. Hopkins will join all of the boxing greats you can name. His traits of tenacity and endurance have been with him and we are going to celebrate Bernard with this Final 1 fight.”

“With greatness comes great responsibility, Bernard Hopkins has taken this to very high levels. He is an ambassador for peace, and is an example in and outside the ring. He has a wonderful relationship with the WBC, and was a very great friend to my father.

“One thing I can tell you, the California Commission does not care who wins, we want both fighters to go home safe. We look forward to a safe and successful event.”

“The people up here are the best in the business. At The Forum, we are extremely excited to host this fight and have the historic Forum be the host. December 17th will be a great night of fights and we look forward to seeing everyone there.”

“Fantasy Springs Resort Casino is proud to be hosting a great weekend in boxing, it will be broadcast live on HBO Latino. We are proud of our longtime relationship with Oscar and Golden Boy Promotions. Golden Boy boxing brings about ten to twelve shows a year to Fantasy Springs and Shabranskyy vs. Barrera will be an exciting fight on December 16th.”

“My next fight is December 16th on HBO Latino, and I am very excited to fight. This is a good opportunity for me and for the fans to witness a great fight. I will be ready”

“First and foremost, thank you to HBO and Golden Boy for this great opportunity. December 16th and 17th will be a great night for boxing, as a legend says good bye to the sport. I never underestimate any opponent or fight, so Roy let’s put on a great show for everyone to see why Golden Boy is the best promoter in the sport.”

“What can I say, December 16th will be a great fight. I want to thank my manager and Golden Boy. It has been anything but a smooth path to get here, but on December 16th you will see who I am and what I can do. Like Bernard Hopkins just said up here, give me a door and I will knock it down.”

Hopkins vs. Smith is a 12-round light heavyweight battle presented by Golden Boy Promotions in association with Star Boxing and sponsored by Cerveza Tecate, BORN BOLD and Casa Mexico Tequila. The event will be televised live on HBO’s flagship series beginning at 10:00 p.m. ET/PT.

Shabranskyy vs. Barrera is a 10-round super lightweight bout for the WBC USNBC Light Heavyweight championship, presented by Golden Boy Promotions in association with Main Events and sponsored by “Tecate, BORN BOLD,” and Casa Mexico Tequila Doors open at 4:00 p.m. PT and the first fight begins at 4:15 p.m. PT. The HBO Latino® Boxing telecast begins at 10:00 p.m. (live ET/tape-delayed PT). Ticket information to be announced shortly.