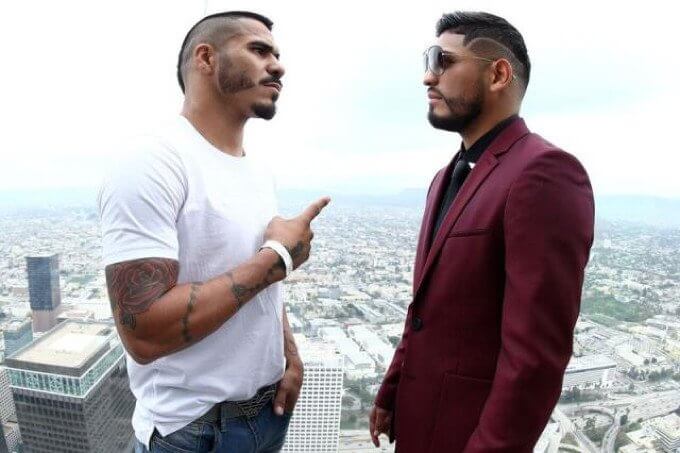 Featherweight world champion Jesus Cuellar and former three-division world champion Abner Mares met face-to-face Thursday at a press conference at OUE Skyspace at US Bank Tower – the tallest building west of the Mississippi River – to discuss their world title showdown presented by Premier Boxing Champions (PBC) on Saturday, December 10. The event will be live on SHOWTIME from USC’s Galen Center in Los Angeles.

Here is what the participants had to say Thursday about the highly anticipated night of action:

“I’ve been wanting to fight Mares for about two years. It’s finally going to happen. This is what I want. I’m going to make a statement.

“I’m very happy that this fight is finally here. I can’t wait to get in the ring on December 10. I’m thankful for the opportunity. I know Mares is popular in Los Angeles, but I have a following as well and they will be there to support me.

“I’m training very hard and feeling physically strong. We never stopped training for this fight. Mares will come prepared for a war and I hope that’s what the fight is like. It’s going to prove who has the bigger heart.

“I’ve been training with Freddie Roach for about four months. It’s been a great partnership and he will make me even better than I’ve been. We’ve been practicing really hard. Freddie is handing me the tools to go to work. You will see all my experience come together on fight night.

“Mares is a great fighter. He’s been a champion for many years. He’s never faced an opponent like me. This will be his hardest challenge.

“I’m sure Mares will give it his all, just like I will. I’ve been dreaming about this fight for years. This will be a great battle, but I am prepared to take my belt back to Argentina.

“This is the most important fight of my career. I’m planning on knocking him out. I know that big things are going to come my way after I beat Mares.”

“This is going to be a smarter Abner Mares. I’ve been learning a lot with Robert Garcia. They gave us a year to train and learn together. He’s a knowledgeable coach. He’s not just a guy who works mitts. This is the real deal. He gets you better and I’m really happy with him.

“I want to thank Cuellar and his team for waiting for this fight to come to fruition. I really appreciate that as a person. It’s finally here.

“I was actually commentating the Stiverne vs. Arreola fight at Galen Center and it was a great atmosphere. The environment there is incredible and I was just imagining being up in the ring as the main event.

“I want the winner of the Frampton vs. Santa Cruz rematch. I want to continue to fight the best. I want to be known as a guy who fights the best.

“Being on the big stage like this has made me what I am. Being on the bantamweight tournament on SHOWTIME really started to show people what my style is like. To be back for another world opportunity, it means everything to me. I’m hoping to give them another exciting fight.

“I never talk down about a fighter. We all deserve our respect. We all have the same desire to strive to be the best. Cuellar is a beast. He hits hard. The record speaks for itself and that’s what has me so excited. This is the kind of fight I want to be in. It brings the best out of me.

“If I have to make it into a brawl, I will do that. I have the boxing abilities to be the smarter fighter and win by out boxing him. I learn from all of my fights, especially the losses. From the Santa Cruz fight I learned that I really need to listen to my corner. I let the crowd get to me and fought the wrong fight. I’m going to be ready for everything.

“This title coming home is going to be a nice Christmas present. It means the world to me. I’m going to add something to my trophy case.

“I’m a new man. I’m a grown man. I have two beautiful daughters. I like to learn something new every day. You will see a different Abner on December 10. This is going to end the year with the ‘Fight of the Year.’”

“I’m thankful to Cuellar and his team for giving us this opportunity. He’s a good person who trains very hard and gives 100 percent all the time.

“I think everybody should come out to this fight or watch on SHOWTIME, because it’s going to be one of the best fights of the year. I guarantee it.”

“Here we go again. It’s been a long process and there have been a lot of people who have helped get us to this.

“I want to thank Mares and his whole team for taking this fight. This is going to be a war. There’s no doubt about it. We love Robert, but we will have our back and forth leading up to this one. These are boxing war times, but he is a great person. But now we are with another one of the best trainers in the world, none other than Freddie Roach.

“Cuellar doesn’t live in Los Angeles. He actually still lives in Argentina. But he has stayed in Los Angeles throughout this whole process. He’s been away from his friends and family for almost nine months, but he has not complained once or asked to go home. That just shows the kind of professional that Jesus Cuellar is.”

“I’m truly excited to be here with all of you. This night will feature two top-notch matchups and four guys who are at the pinnacle of their respective divisions. I’m really excited for this to be my first event back.

“This is a statement fight for Jesus Cuellar. It’s the biggest fight of his career. But he has passed every test so far. He’s a true warrior, as all Argentine fighters are. He’s a big puncher with a sterling record. This is a tough challenge, but he has every intention of keeping that belt.

“Abner Mares is a true warrior and you will all have the opportunity on December 10 to go after a fourth world title against a strong champion in Jesus Cuellar, who has defended his title five times. But that is the kind of person Abner Mares is. He’s going to test himself against the best there is.

“I’m happy to be back and hopefully I’ll be able to add to this great sport of boxing. We’re here in a first class venue today and this is the kind of venue deserving of boxing. Boxing is about entertainment, and if you were to pick four boxers to put on an entertaining card, these would be them.

“These are going to be tremendous fights. Styles makes fights. Mares has been waiting for this opportunity and Cuellar is going to fight to keep his title. This is one of the most talked about fights around. It’s going to be all toe-to-toe action from the start to the finish.

“Two of the best matches in the sport are happening right here in Los Angeles on the same night. This is the best fighting the best and Los Angeles will be buzzing.

“It’s very special to be able to do my first event back in Los Angeles. To have two exciting, toe-to-toe battles on this card is great. Then the cherry on top is the opportunity to work with a man like Abner Mares. I met him at the 2004 Olympics and I was always impressed with his style and his personality and how he carries himself. “

“We’re thrilled to be here working on another great night of boxing. Together, with the matchmaking expertise of my father, Tom Brown, and Richard’s promotional talent, this has the makings of an excellent collaboration.

“We’re especially looking forward to working with the great staff at the Galen Center. We were here once before, for the heavyweight world title fight between Chris Arreola and Bermane Stiverne. That was a sold out night and I have a feeling this one will be too.

“Los Angeles has the best fight fans in the world and I know that they will be there to support these great fighters.”

“SHOWTIME continues to deliver the strongest lineup of any network in boxing, bar none. We recently announced a slate of upcoming events that is further proof that no one is committing more resources to move the sport forward than Showtime. And the next great run of evenly matched, world class fights begins on Saturday, December 10 in Los Angeles. This card features four fighters ranked in the top-10 of their division taking the right fight at the right time. These men are as respectable and dependable outside of the ring as they are ferocious and talented inside the ring.

“We’re proud to be showcasing these two world title fights on the network. These fights exemplify what SHOWTIME CHAMPIONSHIP BOXING is all about.

“Mares and Cuellar might be the most evenly matched of the five featherweight championship fights we have presented on SHOWTIME this year. And we know that Jermall Charlo vs. Julian Williams, the latest in a series of fights at junior middleweight, will determine the future of the deep and talented division.”