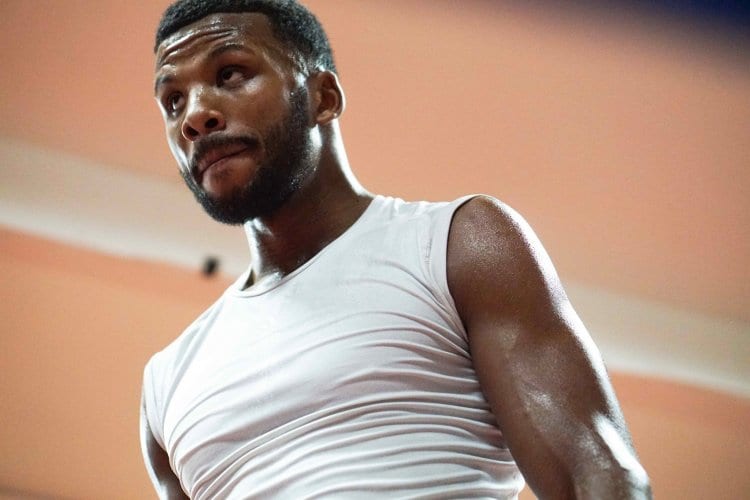 Super middleweight champion Badou Jack spoke to media in Las Vegas Thursday, just days before he travels across the country for his world title unification showdown against James DeGale on Saturday, January 14 from Barclays Center in Brooklyn and live on SHOWTIME®.

Joining him at the workout at Mayweather Boxing Club was former title challenger Thomas Dulorme, who opens up action on SHOWTIME EXTREME in an eight-round welterweight bout against Brian Jones. Televised coverage on SHOWTIME EXTREME begins at 7 p.m. ET/PT and is headlined by junior featherweight world champion Amanda Serrano against former world champion Yazmin Rivas and also features Ievgen Khytrov battling Immanuwel Aleem in a 10-round matchup of undefeated rising middleweight contenders.

Tickets for the event promoted by Mayweather Promotions and DiBella Entertainment, start at $25. They can be purchased online (www.ticketmaster.com, www.barclayscenter.com) or by calling 1-800-745-3000. Tickets are also available at the American Express Box Office at Barclays Center. Group discounts are available by calling 844-BKLYN-GP.

“I feel really good mentally. I’m excited. All the hard work is done and now we’re just cruising. One more week and it’s on.

“This has been the best camp of my career. There’s been no distractions, no arguments just working hard and having fun while getting better.

“I had a better meal plan to cut weight leading up to this fight and it’s helped me out in training. I’m going to be 100 percent ready on fight night.

“The guy that wants it the most and whoever is the smartest in the ring will be the winner. I plan on being both.

“I know DeGale wants to be great too. He’s going into people’s backyards and searching for glory. But I can’t speak for him. All I can do is speak with my actions.

“I’m not expecting an easy fight. I’ve been the underdog before. People have written me off forever. It’s nothing new to me. DeGale is a good fighter, but I believe in myself.

“I’m going to have a good jab, use my range and be smart in there. I think my skillset can take away any advantage he thinks he has. Timing kills speed.

“His awkward style can make him tough to fight. He’s not by the book. He’s not very technical but he’s an excellent fighter. I don’t want any excuses from him when I beat him.

“I feel very excited to fight under the support of Mayweather Promotions for the first time. I’m happy with the decision I made and where my career is going.

“New York is my city and it’s my favorite place to fight. There are a lot of Puerto Ricans and I can’t wait to perform in front of them.

“I feel very strong physically. I had a great training camp and have worked hard every day and listened to my coaches. I can’t wait to get in the ring and break my opponent down.

“This is a very good show with a lot of exciting fights. All the fans should come out because it’s going to be a great night from start to finish.”

“A lot of things have contributed to Badou becoming the fighter who he is today. I think that he’s improved as a champion. A lot of the times people don’t understand what fighters have to go through early in their careers. Badou has overcome a lot of adversity, including evolving from his loss. There are very few fighters who become better fighters after they become champions. Badou is living the American Dream and Floyd and myself are very proud of him.

“I predict that Badou is going to deliver a knockout. I envision him taking a handful of rounds to figure out DeGale’s style, while still being aggressive. In the later rounds, I think that he’s unstoppable.

“James DeGale is a tremendous fighter. I’ve followed his career for quite some time. He’s a very flashy and creative fighter. He kind of makes it up as he goes. His style is unique, but there are some things that Badou and his team have put into place to disrupt DeGale. Badou Jack has seen every style out there. He’s mentally and physically prepared to take care of his opponent.

“The advice I’ve given Badou is to stay focused and stay in the moment. Don’t worry about anything other than what is in front of you. You can’t look forward to the next fight or let anything throw you off. He’s put in the work. Most importantly, his mental state is right where it needs to be.

“Mayweather Promotions is ready to invade Brooklyn. We were able to work everything out and bring the first fight of the New Year to the city. We’re very excited to go and help Badou and the rest of our fighters put on a great show.”