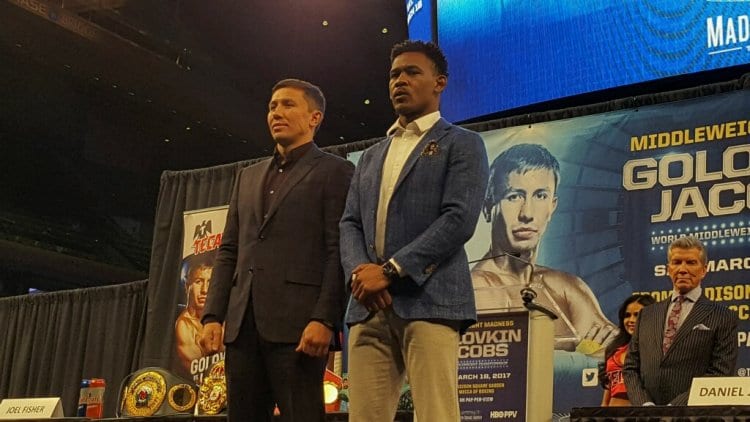 photo: Adam Sperber
On Tuesday, January 10 at 12:00 p.m. ET, Golovkin and Jacobs along with their teams will host a Press Conference in the Madison Square Garden Arena to formally announce their showdown at “The Mecca of Boxing” set for Saturday, March 18, 2017. The championship event will be produced and distributed live by HBO Pay-Per-View beginning at 9:00 p.m. ET/6:00 p.m. PT.
Golovkin and Jacobs have an extraordinary, combined 35 consecutive knockouts heading into this highly anticipated battle.

Presented by K2 Promotions, tickets for “MIDDLEWEIGHT MADNESS” priced at $1000, $600, $400, $300, $200 and $100, are now on sale and can be purchased at the Madison Square Garden Box Office, all Ticketmaster outlets, Ticketmaster charge by phone (866-858-0008) and online at www.ticketmaster.com or www.thegarden.com.
Our boxing correspondent, Adam Sperber was in the building and took the following photos at the event.
Tags:Andre RozierDaniel JacobsDanny JacobsGennady GolovkinHBO BoxingHBO PPVK2 PromotionsMarch 18thpay-per-view
Previous post