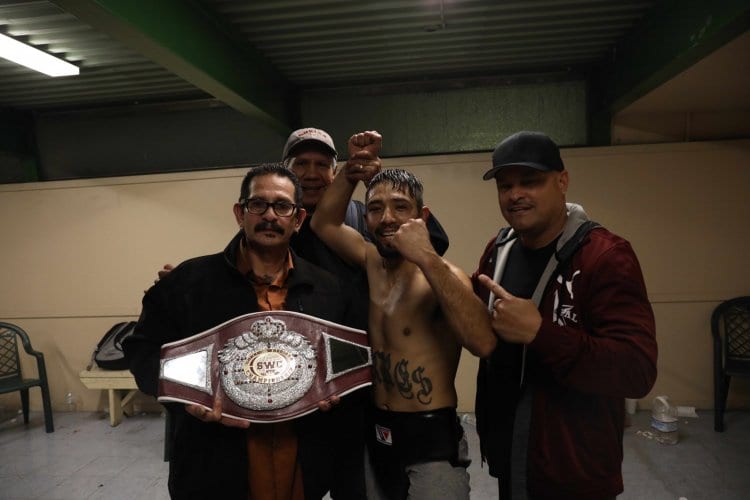 In front of a sold-out crowd (that saw many turned away at the door including media) at the Alameda County Fairgrounds in Pleasanton, Ca, Alberto Torres (8-0-2 4KOs) of Sacramento, Ca won the featherweight Square Warriors Championship as he defeated Adam Fiel (10-1 4KOs) of Vacaville, Ca in the main event.

The bout was very close with no fighter pulling ahead until the fourth round when Fiel dropped his hand after a combination that saw Torres land a left hook that would knock him down. Fiel would get to his feet, but the referee would stop since he didn’t have his legs under him.

The co-main event saw a pretty big upset as junior welterweight Eddie Diaz (3-6-2 1KO) technically knockout Luis Garcia (6-1-1 5KOs) of Richmond, Ca. Diaz applied pressure to Garcia and caught him with counter punches that dropped Garcia in the second round. Garcia was never able to recover as the bout was waived off a few moments after he got to his feet.

Women’s middleweight Raquel Miller (3-0 2KOs) of San Francisco, Ca picked up her second KO win of her career as she stopped Latashia Burton (4-8) with solid body work that Burton was unable to answer forcing the referee to stop the fight.

In a battle of junior welterweights, Lennard Davis (1-0-1) of Oakland, Ca and Brandon Dino Adams (4-3-1 2KOs) of Stockton, Ca fought to a draw. The fight was very close with Davis applying more pressure,  but a tricky southpaw in Adams landing the cleaner punches. The bout was very tough to score and only went four rounds.

Lightweight Jose Iniguez (3-0 2KOs) picked up a fourth round TKO over Ali Ahmed (0-1) of San Jose, CA. Ahmed won the first round, but got caught with right hand in the second round after sending Iniguez down with a hook prior. The fourth round saw Ahmed hurt again by Iniguez’s right hand with a flurry ending the fight.

Light heavyweight Jasper McCargo (2-0 2KOs) picked up his second straight KO win as he stopped Richard Rigmaden (0-1) in the second round.

Welterweight Cesar Lomeli (1-0) picked up the first win of his career as he narrowly beat Luis Casillas (0-1-1) .

Jamie Mitchell (1-0) picked up a decision win over Dalia Gomez (0-1) in an exciting and action packed fight that had a lot of the fans excited.

Willie Shaw (1-0 1KO) opened the card with a first round knockout of Tyler Marshall (0-2).