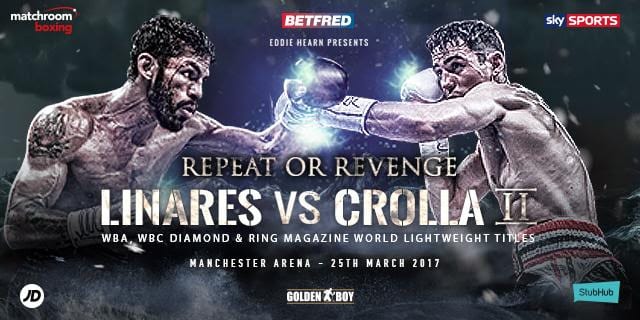 WBC Diamond, WBA and Ring Magazine Lightweight World Champion Jorge “El Niño de Oro” Linares (41-3, 27 KOs) and Anthony “Million Dollar” Crolla (31-5-3, 15 KOs) met today in Manchester for a press conference ahead of their highly anticipated rematch for Linares’ titles set at the Manchester Arena on March 25, live on Sky Sports and sponsored by Betfred.
Here is what the participants had to say at today’s press conference:
JORGE LINARES (41-3, 27 KOs), WBC Diamond, WBA and Ring Magazine Lightweight World Champion:
“I wasn’t supposed to win, but I’m glad I did so I can come back. Manchester treated me so well and I am so happy to return. The belts mean so much to me and my country, and I am going to work very hard to make sure that I take them home again.
“It’s a new year and a new day, Anthony is going to be better and hungrier, and that means I will work harder, come with more skill and an even better game plan to win. I hope to see another huge crowd in Manchester and we’re going to provide the fans with another beautiful fight.”
ANTHONY CROLLA (31-5-3, 13 KOs), Lightweight Contender:
“I want the belt back, simple. Fighting for these prizes in front of us is huge, I’m so lucky to have a second chance and it’s one I have to take. It was a special night last time, great crowd and it’ll be even bigger this time. The setting was perfect but I lost my belt. I lost to a great fighter but I don’t celebrate losing, I don’t want to feel it again and I want to go down in history by beating a great fighter. I am better in rematches and I’m locking myself away to work harder and smarter to make sure these belts stay here.
“Jorge is the best and I want to be the best – beating him stakes my claim. I didn’t win the first one but I had success and I can work on that. We’ve both got great teams behind us, I believe if I make the right changes for the fight I will take the titles.
ROBERT DIAZ, Head of Matchmaking Golden Boy Promotions:

“I didn’t know how Jorge was going to react to the fans, as I know that Anthony has great fans. I think that Jorge won a lot of fans that night and he’ll have his share. Anthony didn’t have to take the fight, he could’ve gone elsewhere and got some wins, but that shows what a man this guy is. He wants the belts and we expect a better Anthony. I said you would see the best Jorge ever and you did – he’s going to be even better this time.”
JOE GALLAGHER, Trainer of Anthony Crolla:
“I need a nasty Anthony Crolla for this fight. Jorge is the best in the world so I need to keep him locked away and getting nasty – he won’t be doing any fan signings or selling tickets. If you like Anthony and care about him, leave him alone, let him work, and come and watch him win on the night.”
EDDIE HEARN, Managing Director of Matchroom Boxing:
“The first fight was a hell of a fight, Anthony was the favorite and now Jorge is the favorite. Anthony is the challenger, he’s done it before against Darleys Perez and he came back better, and he needs to do that again as Jorge is the #1 in the division and proved it here last time.
“It gives me huge pleasure to announce that the fight will be on Showtime in the U.S. and I want to thank Stephen Espinosa and his team for making this happen.”
Tickets for Linares vs. Crolla II are on sale now and available at www.manchesterarena.com or by calling 0844 847 8000 in the UK.
Tickets are priced at £40, £60, £80, £100 and £150 while VIPs tickets are exclusively available through www.matchroomboxing.com priced at £250.
Face value tickets for March 25 will also be available from www.stubhub.co.uk/matchroom-boxing-tickets/.
Linares vs. Crolla II is a 12-round lightweight bout for the WBC Diamond, WBA andRing Magazine Lightweight World Championship on March 25 at the Manchester Arena presented by Matchroom Boxing in association with Golden Boy Promotions and sponsored by Betfred.
Tags:Anthony CrollaGolden Boy PromotionsJorge LinaresManchester ArenaMarch 25thMatchroom sportPress Conference