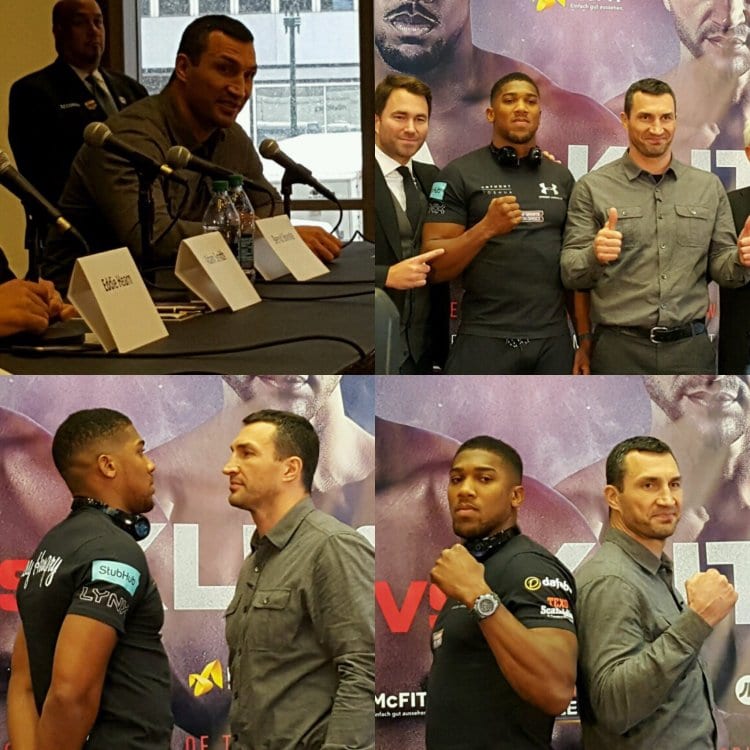 photo: Adam Sperber
On Tuesday, January 31, IBF Heavyweight World Champion ANTHONY JOSHUA, (18-0, 18 KO’s) and long reigning Former Unified Heavyweight World Champion WLADIMIR KLITSCHKO, (64-4-0, 53 KO’s) hit New York City for media appearances and to hold a press conference to discuss their April 29 massive international boxing clash set for London’s Wembley Stadium where a sold-out crowd of 90,000 will bear witness.
The press conference was held at Madison Square Garden, known as The Mecca of Boxing, where Klitschko was been victorious four times in his illustrious career.
ANTHONY JOSHUA
“This is all about the mind games now, but as we know I’m a man who likes to perform. The obsession has always been there for me and not just in boxing. It starts with self, boxing is a representation of who I am. I’m determined to become the best. That’s my obsession.”
“I’m a man who likes to perform and entertain and that’s away been there. I’ve always want to take on the best.”
“The questions are correct, is it too soon, have my opponents prepared me for this” God would never put me in a position I couldn’t handle, fighting Wladimir Klitschko in front of 90,000 people. But the objective still remains the same.”
WLADIMIR KLITSCHKO
“I first fought here in 2000 on the undercard of Lennox Lewis vs. Michael Grant, Anthony was 10, it’s crazy to think about time and how fast it runs. When I fought Samuel Peter, his promoter called me dead-man walking, but that man kept walking for a very long time.”
“I understand and know why this press conference is here in New York City. I know a lot of fans will be watching on TV and in the arena. I’ve fought in front of huge crowds but 90,000 is my biggest arena.”
“I’m fighting a man that I was, is and will be a fan of since I watched Anthony Joshua win his Olympic Gold Medal in 2012. He was my sparring partner in 2014 when I trained for Kubrat Pulev.”
“I believe this man has a lot of skills, maybe yes, maybe not he will be the biggest star in boxing. I know there are plans to fight Wilder after me, it’s good to be young and ambitions, but I believe this fight has a lot of questions. Is it too early for him, too late for me?”
“All those questions will be answered on April 29, do I still got it or is it too late? I’m looking forward to his challenge, I have my goal to become three-time world champion and I’m obsessed with it.”
EDDIE HEARN, Matchroom Boxing
“A pleasure to be involved the biggest boxing event in British boxing history. It would be so easy for Anthony Joshua to continue selling out the biggest arenas in the UK while fighting less that world class competition and do what every other fighter has done, keep knocking out the easy targets, it’s not what Anthony Joshua is all about.”
“In his 19th fight, Anthony Joshua is stepping up to fight a true legend in Wladimir Klitschko and isn’t that what boxing’s all about? What’s sports is all about? Create nights and moments that people will never forget, 90,000 people in the biggest stadium in the UK.”
“Anthony Joshua has set a frightening pace but I believe on April 29 it will be the crowning of the new worldwide sensation n boxing.”
BERND BOENTE, KMG Management Group
“It’s great to be back here at the Garden with the success of Wladimir and Vitali in the past and now we have a bigger event in a bigger arena with Anthony Joshua. On April 29 at Wembley Stadium with 90,000 people, a true promoter’s dream fight.”
“We have the young, undefeated champion Anthony Joshua against the longtime ruler of the heavyweight division, Wladimir Klitschko. This will be Wladimir’s 29th world title fight which is a record for the heavyweight division.”
“We are looking forward to a fantastic fight with great TV partners, Sky in the UK, RTL in Germany and we will sort out the US TV partner shortly.”
ADAM SMITH, Sky Sports (Moderator)
“Wladimir’s back as he challenges the new generation, Anthony Joshua, the IBF Champion of the World. They lock horns in a battle for the ages in front of a record 90,000 people at our national stadium, Wembley in London on April 29. A multi unification and a fantastic fight. The buildup is going to be immense.”
JOSHUA vs. KLITSCHKO is presented by Matchroom Boxing, K2 Promotions and KMG Management Group.
Tags:Anthony JoshuaMarchNew York CityPhotosPress ConferenceQuotesWladimir Klitschko