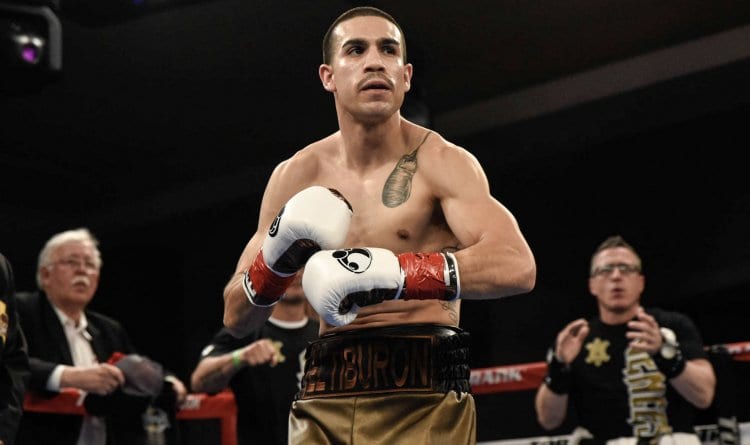 Andy Vences (18-0 10KOs) fought one of his toughest foes on Friday, March 10th at Tachi Palace in Lemoore, CA against Angel Hernandez (14-8-1 8KOs), who to the outside looking in, had a pedestrian record.

Hernandez, a seasoned ten-round fighter, knew how to pace himself for the full duration as Vences had never gone ten rounds, despite being schedule for a ten round fight the time before against Casey Ramos. Vences left his previous trainer, Gabe Flores Sr. and worked with his second assist, Angel Cordon Sr. in Martinez, CA at FightKore International in preparation for the fight with little over a month of training.

It was a perfect storm as Hernandez was a live body coming to win and also putting pressure on a young fighter as well as getting stronger by the round. Vences, who won the bout on all three cards, was pleased with the performance, but also told ITRBoxing.com that he has room for improvement.

Hernandez had also fought Robert Easter Jr. and Erick De Leon on less then a week’s notice and did not get stopped.

Daniel Valdivia of Tulare, CA continued his exciting career as the junior middleweight as he got a first round knockout over Douglas Ataide in a little less then one minute. This mark the second time Valdivia has picked up a win over a highly touted fighter as he stopped Jeremey Ramos two years ago at the same venue.

Valdivia, who has been in many high profile camps including “Canelo” Alvarez’s and Jason Quigley’s camp is looking to get a big fight in the near future.

Global Boxing Organization middleweight champion Quilisto “Kilo the Kid” Madera knocked out Manuel Medrano with nearly the first punch of the fight. Madera, who has already fought fighters with nearly three times the experience as himself is looking to continue his entertaining career in the central valley in the coming year.

Madera has been sparring Andre Ward and Daniel Jacobs lately.

Top Rank recent signee featherweight Isidro Ochoa picked up a four round decision over a very game Oscar Santana. Ochoa took the fight on nine days notice after Bryan Lua was injured and filled in for his stablemate.

Cruiserweight Blake “The Beast” McKernan dominated Randy Rogers as he dropped the outgunned fighter twice before getting the fight waved off. McKernan, a very popular fighter from Sacramento, CA is looking to get signed by a major promotion in the coming year and is a fan of staying active as he has fought six times in his first year of being a professional.

Monica Bradley managed fighter Edgar Martinez picked up a technical knockout as Jorrell Sparenberg was unable to answer the bell for the third round.

Junior bantamweight Brent Venegas III picked up a win over Mulapi Enjani, a fight that was Venegas out maneuver his foe.

Junior lightweight Pedro Moreno picked up a six round KO over Oscar Santana in the first fight of the night.

This card was completely sold-out.