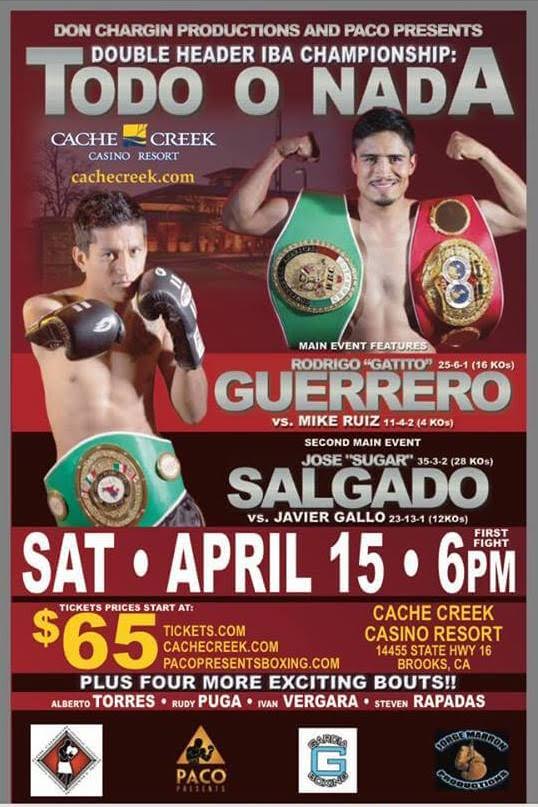 Longtime hall of fame promoter Don Chargin Productions and Paco Presents Boxing returns with their first card of 2017 entitled “Todo o Nada” as two-time world title contender Rodrigo Guerrero (25-6-1 16KOs) takes on Fresno, CA’s Mike Ruiz Jr. (11-4-2 4KOs) for the International Boxing Association junior bantamweight title at Cache Creek Casino and Resort in Brooks, CA on April 15th.
Rodrigo Guerrero has fought all across the world in some of the biggest fights possible as he fought Stuart Hall in front of a sold-out crowd in the United Kingdom, lost a very questionable decision to Daiki Kameda that we have included for you to watch (fight here) as well as fighting a prime Vic Darchinyan, whom he went the distance with. Guerrero is as good as ever and is looking for a big win over a young fighter and win a title.
Mike Ruiz Jr. is coming off the biggest win of his career after upsetting rising star in the super flyweight division Bruno Escalante in their rematch last year in Oakland, CA. Ruiz Jr. has been looking to parlay the win into a big fight and now will face a two-time world title contender in hopes of getting redemption with a win over Guerrero as he would win his first ever title.
Ruiz Jr. came up short in his first attempt at winning the IBA title and looks to complete his resurrection of his career by winning the title he fell short of winning four years ago in Redwood City, CA at Cache Creek Casino and Resort.
The co-main event will feature super bantamweight Jose Salgado (35-3-2 28KOs) taking on Javier Gallo (23-13-1 12KOs).
Salgado is a former NABF super flyweight champion, who fought Carlos Cuadras in 2014 for the WBC super flyweight title in which the bout was ruled a draw. Salgado has not fought for a world title since and is looking to get himself into title contention for a Cuadras rematch or a even a bout with Roman “Chocolatito” Gonzalez in the near future. A win would set-up Salgado amongst the top of the division.
Sacramento, CA featherweight Alberto Torres (8-0-2 4KOs) who knocked out undefeated prospect Adam Fiel in his last bout will take on tough spoiler in Jose Silveria (17-20 6KOs), who has three times the professional experience of Torres and is known for never being an easy outing for anyone.
Salinas, CA super middleweight Rudy Puga Jr. (8-0 7KOs) will look to return from his time off as Puga will have been out of the ring for over a whole year since his last bout. Puga will take Cameron Silveria Riveria (7-4-1 5KOs), who recently fought Global Boxing Organization middleweight champion Quilisto Madera in an action fight last September in Lemoore, CA.
The card will feature 18 year-old welterweight Ivan Vergara (1-0) of Vacaville PAL who is looking to pick up his second win of his professional career will face Manuel Munoz (0-2) of Mexico. Steven Rapadas (Pro Debut) of Sacramento, Ca will make his professional debut against Percy Peterson (1-14-2) in a featherweight bout as well.
Tickets are available at CacheCreek.com, Tickets.com, and Pacopresentsboxing.com, or by calling Cache Creek Casino Resort at 1-800-922-8686..
First bell is at 6PM.
Cache Creek Casino and Resort is located at 14455 State Hwy 16 in Brooks, CA. Please enter the casino and follow signage to the event.
Tags:BrooksCACache Creek CasinoCameron Silveria RiveriaGolden Boy PromotionsIvan VergaraJAvier GalloJose SalgadoManuel MunozMichael Ruiz JrMike Ruiz JrNABF super flyweightPaco DamianPaco Presents BoxingPercy PetersonRodrigo GuerreroRudy PugaRudy Puga JrSteven Rapadas
Previous post