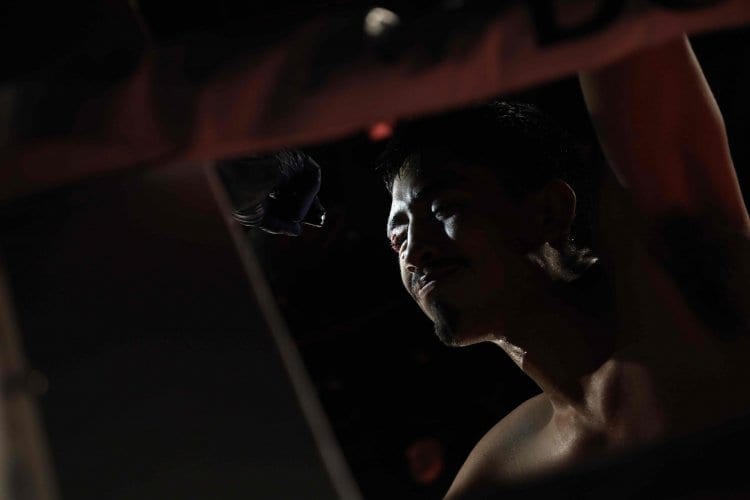 The main event between bantamweight Michael Ruiz Jr. (11-4-3 4KOs) of Fresno, CA and Rodrigo Guerrero (25-6-2 16KOs) of Mexico ended in a second round draw as a clash of head opened a cut over Guerrero’s eye that forced a stop to the action, since it was before the fourth round, it was ruled a technical draw since the duration was not long enough to score the bout for a winner.

Prior to the stoppage, the action was heating up as Michael Ruiz Jr. dropped Guerrero in the first round with a straight left to the body. Ruiz Jr. appeared to be in control of the action until the bout was stopped.

The results was bitter sweat as Ruiz Jr. was hoping to win the IBA Americas bantamweight title, which was on the line, but not presented to either fighter since the fight was ruled a draw.

The co-main event saw one of the best fights of the year as super bantamweight Javier Gallo (24-13-1 12KOs) picked up a split decision win over Jose Salgado (35-4-2 28KOs) in a back and forth fight in which both fighters hit each other as hard as possible and as often as possible. The judges saw the bout 96-94 Gallo, 96-94 Salgado and 97-93 Gallo.

Popular Sacramento, CA fighter Alberto Torres (9-0-2 4KOs) defeated veteran Jose Silveria (17-21 6KOs) by way of a six round decision. Torres outboxed Silveria, who stood in the pocket looking to exchange, but Torres didn’t give him chances to do so. Torres won by a wide margin on all three cards.

Salinas, CA’s Rudy Puga Jr. (9-0 8KOs) KOed Cameron Rivera (7-5-2 5KOs) in the sixth and final round of their fight. Puga Jr., who was coming off a 13 month lay-off showed signs of rust early, but began to pick up the pace. In the fifth round, Puga Jr. was deducted a point for a low blow. That didn’t matter much as Puga Jr. stopped Rivera with a straight hand to the head in the round following.

Babyfaced Assassin Ivan Vergara (2-0 1KO) of Vacaville, CA picked up his first knockout victory as a professional as he Manuel Munoz (0-3) of Stockton, CA.

In the opening bout, Steven Rapadas (0-0-1) of Sacramento, Ca fought to a majority draw with Percy Peterson (1-14-2) of Sacramento, Ca. The bout was closely contested as neither fighter separated themselves from each other, Peterson had great success with a jab whereas Rapadas seemingly controlled most of the rounds, but struggled to finish rounds strong.