In a press release sent out yesterday from Joe Smith Jr.’s promoter, Star Boxing, the promotion informed members of the press that Smith Jr. fought with a broken jaw after the second round.

Below is the official statement.

Popular Long Island light heavyweight contender JOE SMITH JR. (23-2-0, 19 KO’S), gritted his way through Saturday’s ten round battle with SULLIVAN BARRERA (20-1-0, 14 KO’s), after suffering a broken jaw early in the 2nd round. Even with a broken jaw, Smith Jr. dug deep to fire away at the skilled Barrera until the final bell, in which he ultimately fell short by scores of 96-93 and 97-92 twice.
In a fight that had the cheering crowd on their feet throughout, Smith and Barrera went to war from the opening bell. Prior to breaking his jaw, Smith wasted no time showing his sheer power as he drilled Barrera with a hard left hook to the forehead in the opening round sending Barrera sprawling to the canvas. Barrera, hurt from the knockdown, showed his proven grit and determination by rising and finishing the round.
Although having his jaw broken in the second round, Smith continued to fight hard throughout the fight which featured excellent two-way action. Smith showed a great chin and tons of heart as he tried his best to fight through a debilitating injury. Smith landed some heavy blows stunning Barrera on occasion but Sullivan outworked him to grab the decision on the judges scorecards.
“Joe knocked down Barrera hard in the first round but in the second round he sustained a broken jaw,” said JOE DEGUARDIA, CEO and President of STAR BOXING. “It’s a similar injury to the one he suffered five years ago and frankly it’s amazing that he continued to valiantly fight over the next eight rounds and finish the fight.”
In his only other previous loss, Smith also suffered a broken jaw against Eddie Caminero five years ago.
Continued DeGuardia, “After spending part of Saturday night at the UCLA Medical Center, Joe will have surgery later this week in New York and we’ll know more then about a time frame for his full recovery. We congratulate Sullivan Barrera on his victory.”
We at Star Boxing are extremely proud of Joe for fighting this fight under such extreme conditions as are all his fans who came to the fight last night from Long Island and those who watched on HBO. Joe Smith is a true warrior and epitomizes what a real fighter is supposed to be. 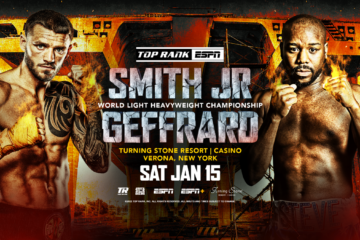