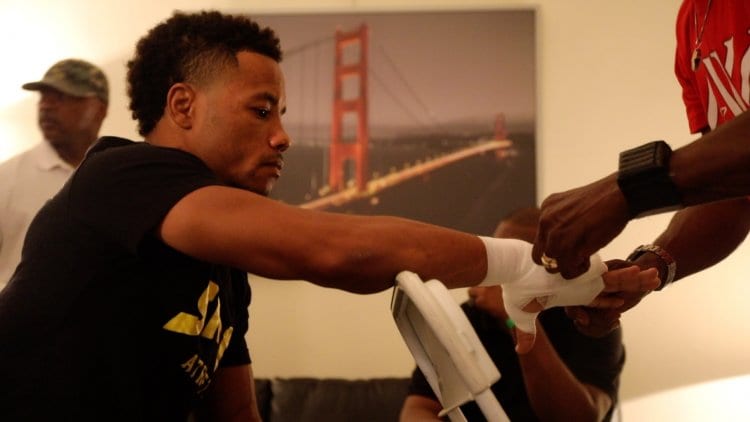 San Francisco, Ca’s own Karim “Hard Hitta” Mayfield (20-4-1 11KOs) made a triumphant comeback against undefeated Miguel Dumas (10-1 7KOs)  of Mexico in a fight that took place at the SF Armory in San Francisco, CA, on a card Mayfield not only main evented, but promoted as well.

“I promoted the bout, I could have picked whatever opponent I wanted, but I choose an undefeated fighter since I am not looking for easy fights,” Mayfield said after the bout in his dressing room. Mayfield, who controlled the majority of the fight often trying to get Dumas to walk into an overhand right like Raymond Serrano fight as well as mauling Dumas.

“…with Terence Crawford out of the division, I want every world champion at junior welterweight to be put on notice,” Mayfield said as he is looking to get into title contention.

In the co-main event, San Francisco, CA’s Raquel Miller (5-0 3KOs) knocked out Lisa Garland (19-9 8KOs) in the very first round of the fight. Miller dominated Garland who looked to clinch to slow the action, a jab followed by an overhand right at the very end of the round put Garland down who was counted out as the bell rang for the first round. The time was 2:00.

Miller hinted at big news fight week and with a dominant performance, it appears the 154 lbs. division in boxing will soon have a new world champion. Miller also dedicated the fight to her mother who is currently in the hospital.

Mayweather Promotions featherweight 19-year-old Xavier Martinez (10-0 6KOs) of Sacramento, CA stopped Raymond Chacon (7-27-1  at the end of the second round. The time was also 2:00.