Lukie Ketelle
9 0 0
Lucas “La Maquina” Matthysse (38-4, 35 KOs), the current WBA Inter-Continental and WBO International Welterweight Champion of Chubut, Argentina held a press conference today at Malbec Argentinean Cuisine in Santa Monica ahead of his fight for the vacant WBA Welterweight World Championship against undefeated Thai superstar Tewa Kiram (38-0, 28 KOs) in a 12-round battle at the “Fabulous” Forum in Inglewood, Calif. In the second main event, Mercito “No Mercy” Gesta (31-1-2, 17 KOs), who was also in attendance, will challenge Venezuela’s Jorge “El Nino De Oro” Linares (43-3, 27 KOs) in a 12-round championship bout for Linares’ WBA, WBC Diamond, and Ring Magazine lightweight titles. The event will be televised live on HBO Boxing After Dark® beginning at 10:30 p.m. ET/PT. 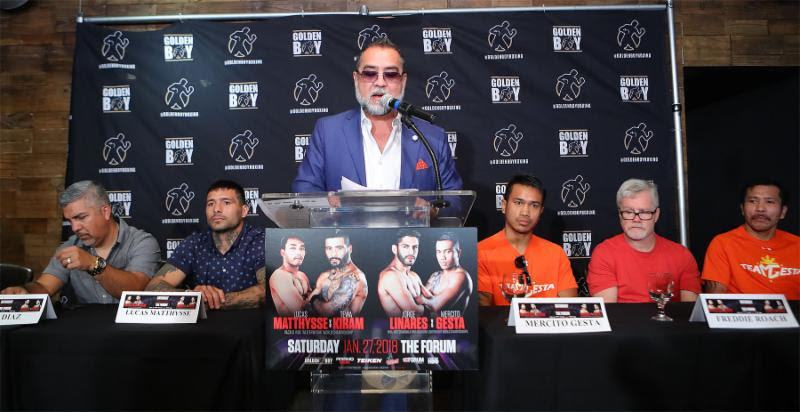 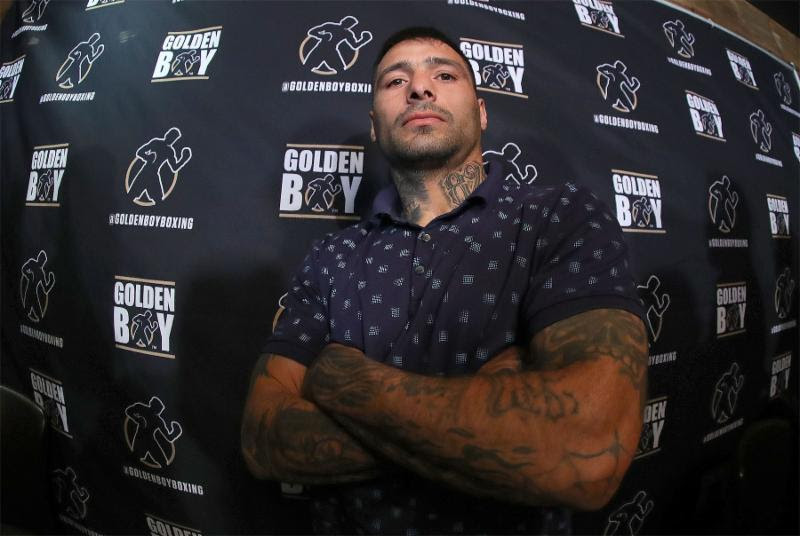 “I’m happy to be back in the United States. We’re preparing well. I’ve had a great camp. I started camp early in Argentina, and now I’m looking forward to closing camp with Joel Diaz in Indio, California. I don’t train for the knockout, but if the knockout comes, I’ll welcome it. I fought everyone at 140. I want to do the same as I did at 140; I want to fight the best.”
MERCITO “NO MERCY” GESTA, Lightweight Contender: 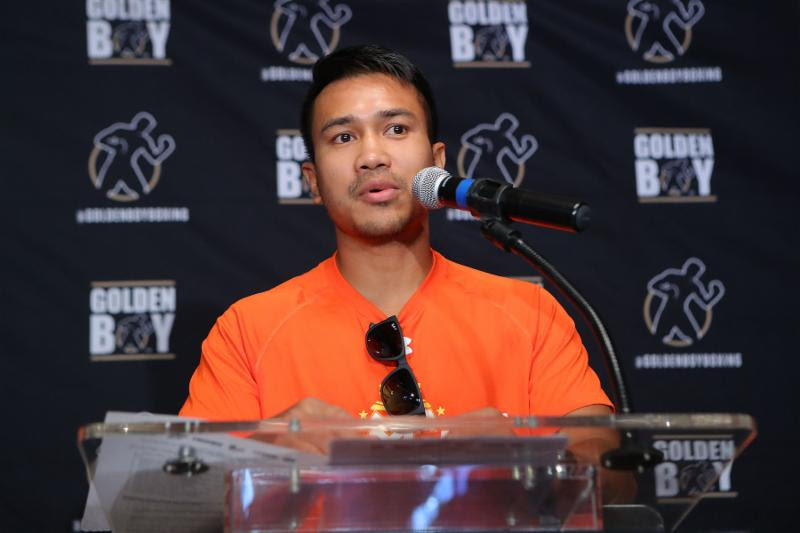 “I know it will be a tough fight. I’m a challenger, an underdog. But I love that feeling. It makes me hungrier, train harder and box smarter. I’ve worked with Jorge [Linares] before with some sparring. I know sparring is different, but I did well. Still, I know his style and power. With the help of Coach Freddie, we’ll have the right strategy. I am hungry for this title. I’ll do anything to get that title. I will give a good show in that fight.”
FREDDIE ROACH, Trainer to Mercito Gesta:

“We’re in a real tough fight. My guy [Mercito Gesta] is definitely getting ready for this fight. We’re going over a lot of strategy. We started sparring yesterday, and it went well. We still have a lot of time to work a little more. He’s looking good so far. I feel we can win this fight. This is a good opportunity for us and we have to take advantage of it as much as we can.”
JOEL DIAZ, Trainer to Lucas Matthysse:

“I’m really happy to be part of Lucas Matthysse’s team. He’s a great fighter. Coming in he’s very motivated. In my first fight him with him, he did really well with Emmanuel Taylor. Coming in to his second fight, he was motivated and happy. I always say that a happy fighter is a successful fighter. You’re going to see a great Matthysse, one who is ready to become world champion.”
ROBERTO DIAZ, Head Matchmaker of Golden Boy Promotions:
“On January 27, Argentine knockout artist “La Maquina” Matthysse will battle Thai superstar Tewa Kiram in a 12-round battle for the vacant WBA Welterweight World Championship at the “Fabulous” Forum.That night, Golden Boy Promotions will have a double main event at the Forum, with Jorge “El Nino De Oro” Linares battling the once-defeated Mercito “No Mercy” Gesta in a 12-round fight for Linares’ WBA, WBC Diamond and Ring Magazine Lightweight World Championships.” 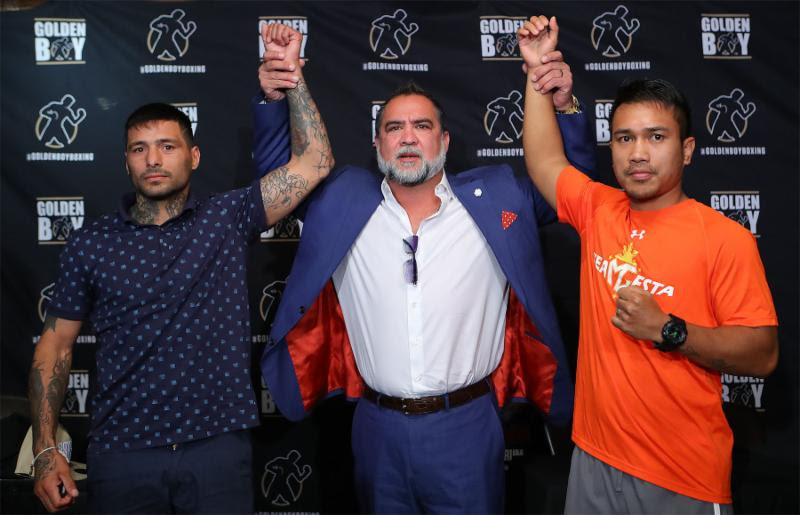 “Lucas Matthysse is a power puncher who is one of the best 140-pounders of this era and has defeated some of the very best of that division. Mathysse recently entered welterweight division when he stopped Emmanuel “Tranzformer” Taylor, and he is ready to fight the very best at welterweight.”
“Gesta has not tasted defeat in six fights, beating quality opponents including Gilberto “El Flaco” Gonzalez and former contender Martin “El Brochas” Honorio. He is hungry for this fight and for this chance to be world champion.”

EVELYN CARRION, Vice President of Special Events for the “Fabulous” Forum:
“We’ve hosted the best of boxing and more than 400 important fights since it opened in 1967, including fights with Muhammed Ali, Oscar De La Hoya, Ken Norton and Shane Mosley. We’ve also hosted many more recent fighters as well. Today we are honored to welcome back Jorge Linares and Mercito Gesta, and we are thrilled to add Lucas Matthysse and Tewa Kiram to the great list of champs who have fought at our historic venue. All of us at the Forum are happy to welcome our friends at Golden Boy Promotions and HBO Boxing.
Matthysse vs. Kiram is a 12-round fight for the vacant WBA Welterweight
World Championship, and is presented by Golden Boy Promotions in association with Arano Box and Galaxy Promotions. Linares vs. Gesta, a 12-round fight for the WBA, WBC Diamond and Ring Magazine Lightweight World Championships is presented by Golden Boy Promotions in association with Teiken Promotions.The event is sponsored by Tecate, “THE OFFICIAL BEER OF BOXING.” The event will take place Saturday, Jan. 27, 2018 at the ‘Fabulous’ Forum in Inglewood, Calif. and will be televised live on HBO Boxing After Dark beginning at 10:30 p.m. ET/PT.
For more information visit www.goldenboypromotions.com and www.hbo.com/boxing, follow on Twitter at @GoldenBoyBoxing, @hboboxing; become a fan on Facebook at www.facebook.com/GoldenBoyBoxing; visit us on Instagram at @GoldenBoyBoxing; and follow the conversation using #MatthysseKiram.
Tickets for Matthysse vs. Kiram are priced at $10, $25, $50 and $100, not including applicable service charges and taxes, with a total ticket limit of 12 per person, go on sale Thursday, December 14 at 10:00 a.m. PST.  To charge by phone with a major credit card, call Ticketmaster at (800) 745-3000 or the Forum Box Office (Monday through Friday11:00 a.m. PST to 7:00 p.m. PST) at (310) 330-7300.  Tickets will also be available for purchase at www.fabulousforum.com or www.ticketmaster.com.
Tags:CAhboHBO BoxingInglewoodJanuary 27thJoel DiazJorge LinaresLucas MatthyssePress ConferenceTewa KiramThe Forum
Previous post