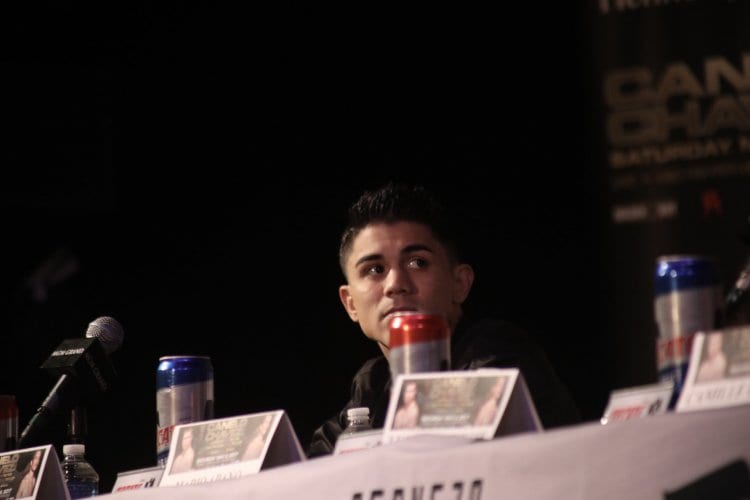 In the main event of a nearly sold-out show from Indio, CA, Golden Boy Promotions #1 rated featherweight by two sanctioning bodies, Joseph Diaz Jr picked up a win over Victor Terrazas. Diaz Jr dropped Terrazas twice in the first round with a body shot the first time and a left hook to the cranium in the first round. Diaz Jr would finish the bout in the third round as Terrazas was counted out.

Lightweight Rey Perez upset Christian “Chimpa” Gonzalez pick up a unanimous decision in a fight that showed a lot of Gonzalez’s flaws rather than his strengths as he trudged forward over in a fight that took place in close quarters with both fighters getting hit a ton. Gonzalez appeared the worse for wear complaining of vision issues, wearing a cut above the eye as well as spending moments in this fight either walking forward without moving his head or sitting on the ropes.

In the co-main event, 19-year-old junior welterweight Vergil Ortiz made short work of Jesus Alvarez to win the NABF junior super lightweight title (yes, that is really a title) by stopping Alvarez in the 3rd round of a scheduled 8-round bout. Rodriguez missed weight the day before and Ortiz wasted little time targeting Alvarez’s body as Ortiz sent Alvarez to the canvas in the first round. In the third round, Alvarez was hurt by a jab-right hand that made his legs buckle, Ortiz closed the show seconds later with a flurry as Alvarez was stopped on the ropes.

Super lightweight Genaro Gamez, who missed weight prior to this bout, ate a lot of punches en route to a fourth-round stoppage of Miguel Mendoza, Mendoza’s corner stopped the bout since the fighter complained of feeling like he was going to throw up. Prior to the stoppage, it was a very competitive fight with lots of competitive exchanges.