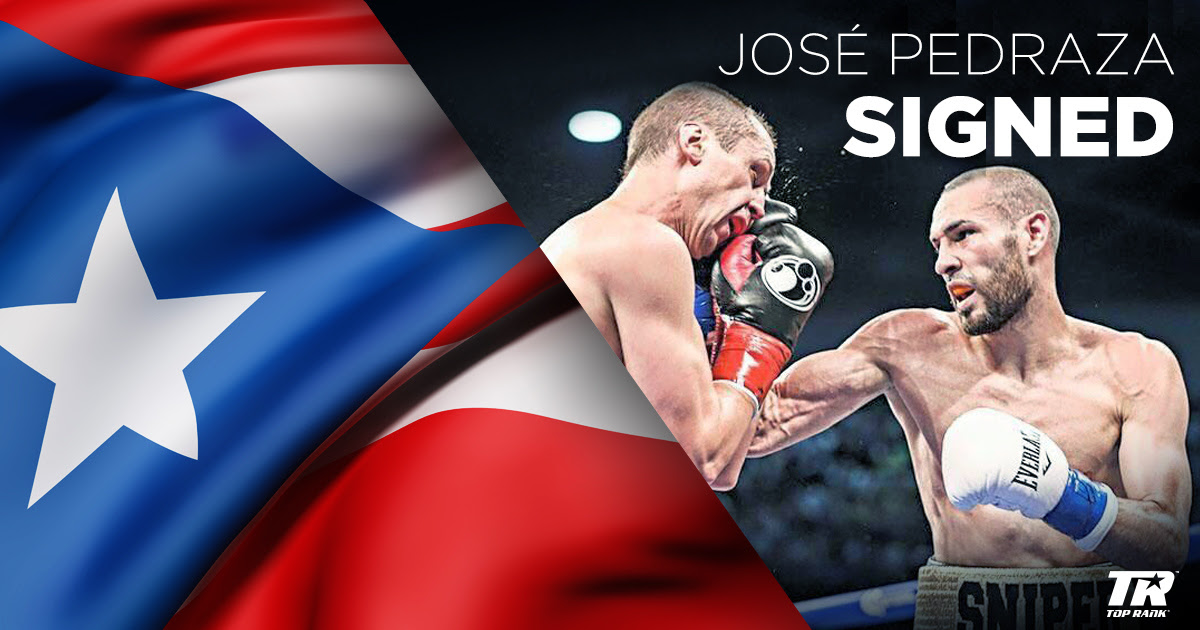 Pedraza will campaign at lightweight, and his debut under the Top Rank banner will take place March 17 on the Jose Ramirez – Amir Imam undercard at The Theater at Madison Square Garden.

“First of all, I want to thank God for making this possible,” Pedraza said. “I want to thank Bob Arum for giving me the opportunity to join the Top Rank family, and for acknowledging that I have the ability and the potential to become a world champion once again.”

“Jose Pedraza is a world-class fighter, and we at Top Rank can’t wait to promote him the way we know how to promote,” Arum said.

“This is an incredible opportunity for my son, who is determined to win another world title,” said Luis Espada, Pedraza’s father/trainer/manager. “With Top Rank in our corner, the sky is the limit.”

“Jose is poised to be a force at 135 pounds, and at only 28 years old, he is still in his prime, and the best is yet to come,” said Mike Leanardi, Pedraza’s co-manager. “The main issue with his career has been inactivity, and we know with Top Rank that will no longer be a problem. We feel Jose is the best fighter in Puerto Rico, and with Top Rank, he will now be able to prove that in the ring.”

Pedraza (22-1, 12 KOs) represented his native Puerto Rico at the 2008 Olympics, won a gold medal at the 2010 Central American & Caribbean Games, and was also a three-time Puerto Rican national amateur champion. He turned pro in 2011, winning his first 19 bouts before earning a shot at the vacant IBF junior lightweight title. On June 13, 2015, in Birmingham, Alabama, Pedraza won the title in dominant fashion with a near-shutout decision over Andrey Klimov.

His title reign lasted two defenses – decision wins over Edner Cherry and Stephen Smith – until he fought the unbeaten Gervonta Davis on January 14, 2017. Davis prevailed via seventh-round TKO, and Pedraza, who had been struggling to make the junior lightweight limit, decided to move up to lightweight after the bout.