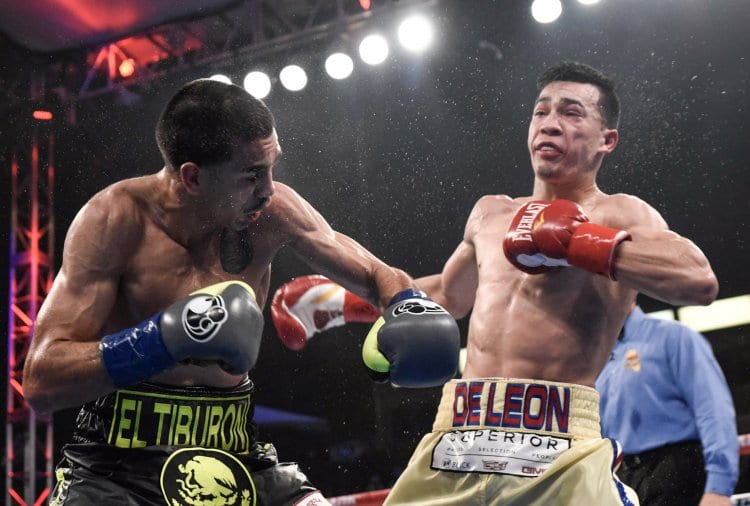 In a delightful main event between Oscar Valdez and Scott Quigg that was marred badly by Quigg missing weight by 2.8 lbs, which hung an ugly stain over an early fight of the year contender. Valdez, who came out to one of the coolest walkout songs in recent memory, took the fight with the heavier man vowing to punish him, what ensued was an another StubHub Center masterpiece with the two men exchanging at nearly every drop of rain that was hit the concrete at the outdoor venue.

The first major event was in the mid-rounds when Valdez’s jaw was broken by Quigg, who nearly ended the fight then and there. Valdez, a true warrior, battled through the rest of the fight with a jaw and moments later as he showed off his full arsenal of punches as well Olympic pedigree boxing and banging with a jaw that was less than stellar. Valdez would return the favor to Quigg breaking his nose as well as bruising his ribs.

A truly enjoyable night of boxing that saw Valdez picking up a hard-fought victory as well a memorable photograph that will capstone the essence of his career which is shown above.

Andy Vences and Erick De Leon fought in the middle of a downpour as seemingly Vences looked to edge the fight by controlling De Leon with distance and range as opposed to De Leon’s aggression, which was fierce at times but lacked tactical awareness as Vences controlled the terms of the fight. The fans ringside had it split, the ESPN broadcast favored Vences as did I, albeit I know Vences. The majority of Twitter and Instagram seemed to feel the same and favor Vences though a Top Rank Twitter poll favored De Leon.

One thing that impressed me was Angel Cordon Sr. and Mike Bazzel in Andy Vences’ corner as well as JaNelson Figueroa’s father, Nelson Figueroa working the corner De Leon’s corner. They gave excellent instructions and adjusted well to make for a great hard-fought bout.

With a draw, a future rematch may happen for a world title.

@arnold_barboza_jr gets the decision in the first fight of the evening to go the distance.

In a fight that on paper that looked to be a very good bout turned out to be an odd affair. Barboza essentially won the first four rounds, but appeared to hurt his hand and began to stop throwing or Reed’s check hook slowed down Barboza, one or the other. Regardless, Reed won the majority of the later rounds, I am not sure it was enough to win, but it was close.

The judges had it for Barboza Jr. wide, not much more to say.

Mikaela Mayer took only 30 seconds to record a knockout her opponent as the same could be said for Andy Ruiz Jr, who also picked up a first-round stoppage win.

Super lightweight Alex Saucedo was pushed in the early going by veteran tough guy Abner Lopez, who had an eerily strange stylistic similarity to Jose Ramirez, had a lot of back and forth rounds before getting a spectacular knockout in the seventh round.

The always impressive super lightweight Maxim Dadashev picked up a stoppage win in the undesirable spot of going on after the main event as well.

Mikey Garcia looked pretty good at super lightweight, yet again, as Garcia became a four-division world champion, a feat only accomplished by legends of the sport of boxing.  Garcia picked up the IBF super lightweight title by defeating Sergey Lipinets in San Antonio, Texas in the main event on a Showtime telecast.

Garcia might not have the most power at super lightweight, but his skill is beyond a doubt top 5 pound-for-pound as he thoroughly dominated a game champion in Lipinets. Garcia even surprisingly decided to trade in the pocket with the known power puncher as Garcia seemed unphased by Lipinets even dropping him in the seventh.

Is super lightweight the ideal weight class for Garcia? No! Is it historic? Yes! Hence why the fight happened.

In what felt like deja vu of Showtime’s telecast of last week, Kiryl Relihk soundly outpointed Rances Barthelemy in what felt like the same exact fight as their outing with Relihk getting the nod this time. Relish’s pressure was something Barthelemy couldn’t stop and be deducted a for low blows in the seventh round seemingly sealed the deal.

Relihk is the new WBA super lightweight champion albeit a rather anonymous won, but a deserving one who earned his rematch and made the most of it.

This is a very tough loss for Barthelemy, who unless Relihk goes on a solid run in the division has to potentially rethink if this weight class works for him.

Commey KOs his way to a title shot

The very likable lightweight Richard Commey did something many believed he could do; get a marquee win. The tough lightweight knocked out Alejandro Luna in the sixth round as he sent him to the canvas twice, the second one ending the fight.

Commey now is set-up for a lightweight title shot, again.

Mario Barrios picked up a highlight reel KO on the undercard you can watch the highlight above. Barrios trains in Hayward, Ca with Virgil Hunter.

Veteran tough guy featherweight Azat Hovhannisyan spoiled Ronny Rios’ homecoming as well as might have sent him off into the sunset from Golden Boy Promotions as he stopped him in the sixth round. The bout saw Hovhannisyan put a torrid pace on Rios, who at first began to box, but began to exchange too much with Hovhannisyan, who exploited it.

Thank you to everyone who came out and tuned in to @espn. Thank you to @goldenboyboxing for believing in me! APPRECIATE YOU ALL & ONE STEP CLOSER TO THE FIGHT YOU ALL WANT TO SEE #waitonit #teamcornejo #tonodiaz #ladiva #nancyrodriguez #oscardelahoya #joeldiaz #MC #boxing #la #mexico #espn

Alexis Rocha picked up a quick knockout in the co-main event of the television card on ESPN2 on Friday.

Welcome to the world of major titles and becoming a contender, Regis Prograis! Prograis absolutely destroyed Julius Indongo in two rounds as he dropped him at the end of the first round and then finished the job in the second.

Prograis is one of the most explosive finishers in the game with legit one-punch knockout power, a southpaw stance and an apparent hunger to win. Prograis is someone to follow now.

Now 5-0 after a knockout victory last night and I’m only getting started! S/O TO MY CITY SAN ANTONIO I LOVE YOU ALL ??? #TeamBam #RGBA #Teiken S/O to @ciscoknowsbest for the picture ?

Top prospect Jesse “Bam” Rodriguez picked up a first-round KO win as the decorated amateur fighter continues to progress in his career. This is a fighter to follow.

2016 U.S. Olympian Charles Conwell picked up a win off television on the DiBella Entertainment off-television undercard. Conwell won every round and got steadily better over time as he dropped his foe in the sixth and final round for good measure.

Souleymane Cissokho continues to look like a superstar as the Virgil Hunter-trained fighter picked up a fifth-round KO that you can watch above. Cissokho has the best uppercut in all of boxing.

2nd round TKO!!! Just want to thank everyone who came out and showed there support, blessed for another victory and another step closer to accomplishing my dream of being World Champion!!!

2017 Briscoe Awards winner super featherweight Avery Sparrow made the most of his Friday night as he picked up a second-round knockout in headlining bout. Sparrow is still at the club level, but he is confident, working hard and winning and as long that continues he can be relevant in the sport of boxing.

Former Olympian John Joe Nevin picked up an eight round decision in the co-main event.

Rob Brant gets a KO

Rob Brant picked up a first-round KO in Minnesota in an off-television bounce back bout after losing to Juergen Braehmer in World Boxing Super Series. Not much else to say.

Dina Thorslund was pushed to limit to win the interim WBC female super bantamweight title. The bout was very competitive from the sparse reports and cards coming from the event. The chances of seeing the whole fight even from a person filming with a phone at the venue, are virtually none existent.

Thankful to god that i entered and left battle in safety ?? shout out to my team, man! Sunset, we still undefeated! ????? Sosa Crew For Life babyyy! #11And0 #SunsetPark #SCFL #BiBo #Sosa

In a small club show in New York, an interesting welterweight prospect from the aforementioned New York, Julian Sosa picked up a win. Sosa might be the best-unsigned fighter in New York City and if he continues to win could find a promoter shortly.

Heavyweight Chazz Witherspoon is on the comeback trail as he picked up an eight-round decision in Atlantic City, New Jersey.