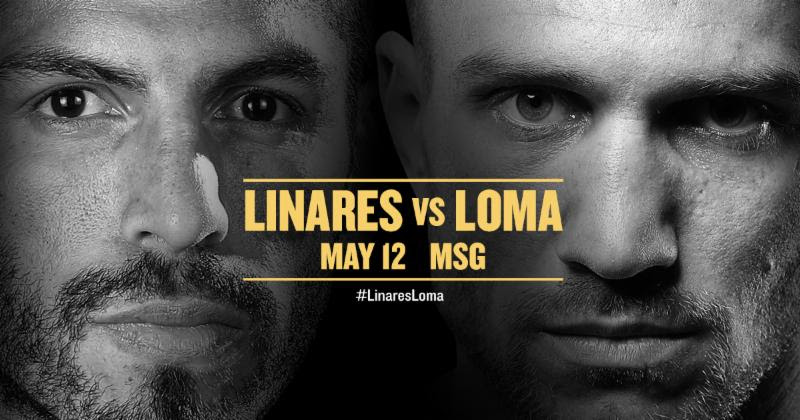 In a battle of two of the world’s pound-for-pound best, JORGE “El Niño de Oro” LINARES will defend his World Boxing Association (WBA) and Ring Magazine Lightweight titles against VASILIY “Hi-Tech” LOMACHENKO on Saturday, May 12, at “The World’s Most Famous Arena”, Madison Square Garden. Linares vs. Lomachenko will be televised live and exclusively at 8:00 p.m. ET on ESPN and ESPN Deportes and stream live on the ESPN App at 6:30 p.m. ET.
Promoted by Top Rank, in association with Golden Boy Promotions, Teiken Promotions, and Madison Square Garden, tickets will go on sale to the general public at 12 p.m. EST on Friday, March 23. Priced at $506, $406, $306, $206, $106, and $56,including facility fees,tickets can be purchased at the Madison Square Garden Box Office, all Ticketmaster outlets, Ticketmaster charge by phone (866-858-0008), and online at ticketmaster.com andMSG.com.
“Jorge has established himself as the world’s best lightweight by taking on any and all comers over his storied career, but a win on May 12 would put him on an entirely different level,” said Oscar De La Hoya, Chairman and CEO of Golden Boy Promotions. “We fully understand that Lomachenko is universally seen as the best fighter on the planet, but he’s never faced anyone with the size and skill of Jorge, and I am confident that he will retain his WBA and Ring Magazine world championships. As this fight makes clear, I’m 100 percent committed to giving fans the fights they want to see and will work with anyone to accomplish that goal.”
“This is the fight that boxing fans wanted. This will be a super fight between two of the best champions,” Linares said. “Not only will I demonstrate why I’m the best lightweight in the world, but also that I’m one of the best pound-for-pound fighters in the world. I have the speed, skill and power to win this battle. This May 12, Vasiliy Lomachenko will bow down to ‘King’ Jorge.”
“This fight marks a significant step forward for one of the greatest fighters we’ve seen, Vasiliy Lomachenko, as he goes up in weight once again to fight the best lightweight in the world, Jorge Linares,” said Hall of Fame promoter Bob Arum, founder and CEO of Top Rank. “I want to thank everyone involved for making this happen, particularly Peter Nelson of HBO and the Golden Boy team, whose cooperation made this fight possible. This demonstrates that promoters and networks, when they work together for the good of everyone, can accomplish so very much.”
“We are very excited about the fight. It should be a great one. Fans from around the world have been waiting for Jorge and me to fight,” Lomachenko said. “We appreciate the work Top Rank did to put this fight together, and thanks to the television networks that helped make it happen. I am looking forward to May 12 in New York to make my debut in the big arena at Madison Square Garden.”
“Linares and Lomachenko are two of the world’s best fighters,” said Burke Magnus, ESPN’sExecutive Vice President of Programming and Scheduling.  “This is a prime example of the highest quality fights that will air exclusively on ESPN’s platforms through the combination of Top Rank and ESPN.”
Linares (44-3, 27 KOs), a 15-year pro from Barinas, Venezuela, is a three-weight world champion who is riding a 13-bout unbeaten streak dating back to 2012. He captured his first world title in 2007, when he scored a 10th-round stoppage over Oscar Larios to win the vacant WBC Featherweight crown. He defended that title once before moving up in weight, winning the vacant WBA Super Featherweight title on November 28, 2008, with a fifth-round TKO over Whyber Garcia.
Three stoppage defeats from 2009-2012 halted Linares’ momentum, but he has since re-established his place among the sport’s very best. He is a boxing globetrotter, as he won the WBC Lightweight world title in 2014 against Javier Prieto in Japan, and defended it against Kevin Mitchell in England and Ivan Cano in Venezuela.
After vacating the WBC Lightweight title due to injury, Linares snatched the WBA Lightweight title by traveling to enemy territory in Manchester, England, and earning a unanimous decision over Anthony Crolla on September 24, 2016. Six months later, he returned to Manchester and won a near-shutout decision over Crolla in their rematch. He last fought on January 27, scoring a wide unanimous decision win over Mercito Gesta at The Forum in Inglewood, Calif.
Lomachenko has already conquered the featherweight and super featherweight divisions as a professional. Now, the two-time Olympic gold medalist is ready to put the lightweight division on notice. From Bilhorod-Dnistrovskyi, Ukraine, Lomachenko has won seven consecutive fights by stoppage, including four consecutive corner stoppages. Last December, he forced fellow two-time Olympic gold medalist Guillermo Rigondeaux to bow out following the sixth round. After the fight, Lomachenko quipped that his new nickname should be ‘No Mas-chenko.’ The Rigondeaux fight capped a 2017 in which Lomachenko earned ‘Fighter of the Year’ honors from ESPN and the Boxing Writers Association of America (BWAA). He also scored TKO victories over Jason Sosa and Miguel Marriaga that year, forcing corner stoppages in fights he was dominating.
The ‘No Mas-chenko’ legend began on November 26, 2016, when the previously unbeaten Nicholas Walters stayed on his stool following the seventh round. Lomachenko captured the World Boxing Organization (WBO) Super Featherweight title earlier that year with a one-punch, fifth-round knockout of Roman Martinez.
Lomachenko, who went an astonishing 396-1 in the amateur ranks, tied a boxing record by winning a world title in his third pro bout. On June 21, 2014, he defeated Gary Russell, Jr. for the vacant WBO Featherweight title, equaling the mark set by Thailand’s Saensak Muangsurin, who won the WBC Super Lightweight crown on July 15, 1975, with a third-round knockout of Spain’s Perico Fernandez.
Tags:Golden Boy PromotionsJorge LinaresMadison Square GardenMay 12thNew YorkOscar De La HoyaTeiken PromotionsTop RankVasyl Lomachenko

Magdaleno vs. Dogboe, Jennings vs. Dawejko set for April 28th on ESPN