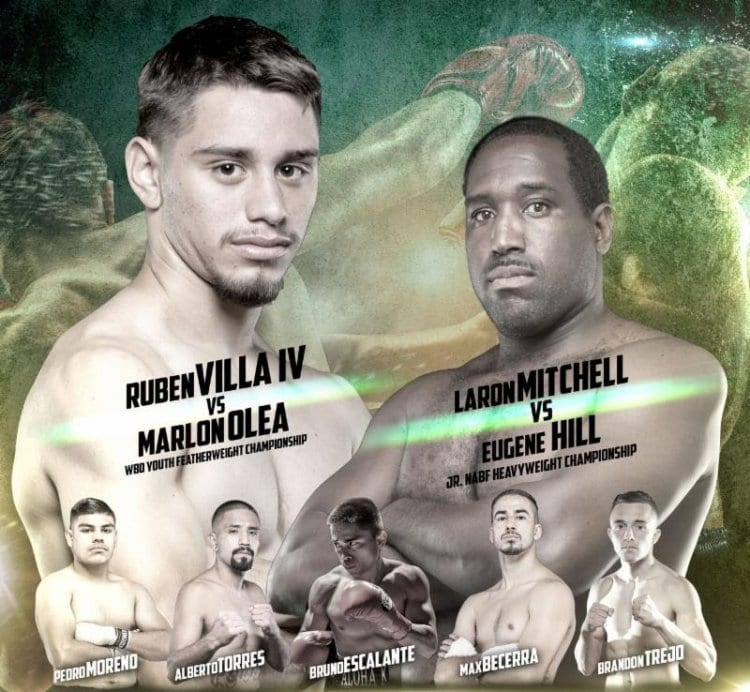 Featherweight Ruben Villa, a Salinas, California native will be competing for vacant World Boxing Organisation Youth Featherweight Title in his hometown against Marlon Olea. Villa, a 2016 U.S. Olympic alternate who lost his spot in the 2016 Olympic Games to silver medalist U.S. Olympian Shakur Stevenson, is currently one of the most active fighters from the 2016 Olympics and is hoping to win his first title come Saturday, April 14th at the Storm House in Salinas, Ca.

Villa has recently switched over to the legendary Salinas Garcia family in Salinas, Ca, with Max Garcia coming out of retirement to train the blue-chip prospect. I rarely say fighters will be world champions, but I would be shocked if Villa doesn’t acquire at least one world title in his career as he has uncanny foot speed, high-level boxing skill matched with intelligence in the ring. In short, Villa is one of those special fighters, who don’t come around that often and did I mention he is a southpaw as well.

Villa spent time in Southern California for this camp sparring at the famed Robert Garcia Boxing Academy to get ready for this fight.

Beloved Bay Area flyweight Bruno Escalante is as active as he has ever been as the flyweight fighter is now fighting for the third time in five months. Escalante is a powerful and explosive former regional champion looking to stay sharp and work his way into contention to challenge one of the bigger names in the division in a high profile fight.

Escalante’s opponent, Diuhl Olguin is no pushover though, as the veteran has pulled off an upset knockout against Horacio Garcia just last year and also fought as high as 126 lbs. against Manuel “Tino” Avila in his last bout. Simply said, Olguin will be bigger than him and has tools to make the fight interesting.

This fight will be telling of where Escalante is at.

Lightweight Pedro Moreno of Sacramento, CA, will return to action and for the first time as a signed fighter to a major promotion as Moreno recently signed with Thompson Boxing after enlisting Charles Bosecker as his manager. Moreno is a hard-hitting lightweight with a traditional Mexican-American style in which he prefers to sit in the pocket and bang with opponents rather than box. Moreno is trained by Marcus Caballero of Caballero Nor-Cal Boxing.

A former Vacaville, CA PAL fighter who used to train with Al LaGardo, who moved down to Southern California for better opportunities for his boxing career, super lightweight, Max Becerra, will also be fighting for the first time under Thompson Boxing after also bringing in Charles Bosecker as his manager.

Becerra had a very competitive fight with Arnold Barboza Jr. on a Top Rank-promoted undercard during Top Rank’s run on UniMas’ “Solo Boxeo”. Becerra has spent a good amount of this camp sparring one of the best in the world, Vasyl Lomachenko in preparation for this bout.

Napa, CA lightweight Brandon Trejo, who is signed with Thompson Boxing will return for the first time in Northern California as well.

Heavyweight LaRon Mitchell has been pulled from the April 14th fight in Salinas, Ca, as an undisclosed injury forced him out of his fight with Eugene “Big Gene” Hill. We wish Mitchell a speedy recovery as well as we are hearing he might return on the June 30th Thompson Boxing card in Sacramento, CA.

The full card will stream on Thompson Boxing’s Facebook page.