The mantra tonight in Salinas, California was “RV4!”, as the rowdy crowd in California’s farmland cheered their hometown fighter Ruben Villa IV to victory. Villa, (11-0, 4 KO), simply outclassed his opponent, Marion Olea (13-3, 12 KO), who had traveled to Salinas from Barranquilla, Colombia.

Villa controlled the early rounds of the fight, ducking and weaving advances by the Colombian challenger, and dishing heavy body punches to set up devastating shots to the head soon after. The promising prospect from Salinas showed excellent ring generalship, dictating the pace and tempo of the fight from the bell in round one.

By round 2, much of the sold out crowd, 1,000 strong, was on its feet, chanting “Ruben!, Ruben!, Ruben!”. The chants echoed vibrantly in the field house turned boxing arena who’s DJ was blasting Latin standards all night long.

The middle rounds spelt more of the same for the outclassed Colombian, Olea, as Villa hammered to Olea’s body and used his superior speed to tag Olea with more than a few effective punch combinations.

By round 7, the crowd was calling for Villa to put Olea to sleep. A knockout seemed like a matter of time before the fight came to a merciful end for the Colombian. In the end, the fight went all 8 rounds, with Villa tossing a shutout on all three scorecards, and earning the Salinas native the WBO Youth Featherweight Title. The result was never a doubt, and the local crowd left in a jubilant mood.

Other fights from the card: 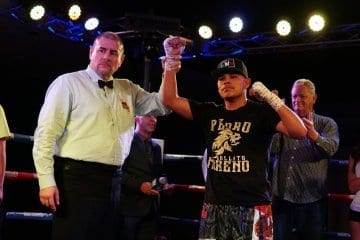