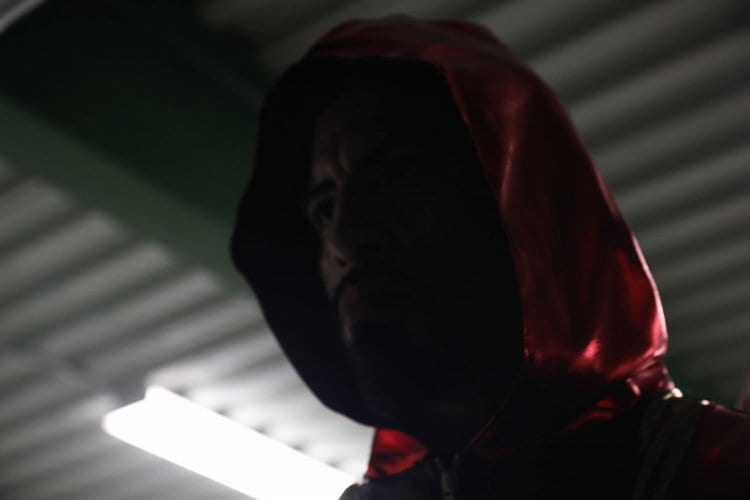 In front of a sold-out crowd in Pleasanton, CA at the Alameda County Fairgrounds, Squarevision Entertainment returned with its inaugural champion, Luis “Vicious” Garcia (10-1-1 7KOs) got a seventh-round TKO victory over Jhonathan Zamudio (1-5-4 1KO) in an action-packed main event. Zamudio started strong, but the pressure and power of Garcia started to effect Zamudio who began to throw less volume as the fight wore on. The fight was stopped in the seventh round when Zamudio was not throwing back after a flurry of punches when referee Dan Steel stepped in and called a halt to the action.

The co-main event saw junior welterweight Prenice Brewer (20-4-1 8KOs) outbox Carlos Lozano (8-9 4KOs) in a six-round bout. Brewer looked good but also got hit a bit too much for one’s liking with his pedigree. Brewer after the bout explained that he had a shoulder injury that acted up during the fight.

The Square Warriors junior middleweight tournament which is for the Square Warriors title and a promotional contract with the company saw their finals take shape. Chris “The Warrior” Washington (2-0 1KO) defeated Tony “Pretty Boy” Hernandez (1-1) by way of a four-round decision, Washington dropped Hernandez in the first round.  Washington had to rally back in the third and fourth rounds as Hernandez put a lot of pressure on the young fighter.

In the other bout of the tournament, Ruben Torres (2-0 1KO) of Sacramento, Ca defeated Jared Ejigu (0-2). Torres from the famed Sacramento Bloodhounds boxing gym ran by boxing legend Ray Woods. Torres put constant pressure on Ejigu, who despite his long six-foot four-inch frame was unable to keep Torres off him.

Chris Washington will face Ruben Torres in the finals later this year.

Cruiserweight Evan Gubera (1-0 1KO) brutally stopped previously unbeaten cruiserweight Fernando Caro (3-1) in the first-round of their bout scheduled for four rounds. Caro came forward and walked into a bunch of Gubera’s straight left hands from the southpaw position, one of which sent him to the ropes as he turtled up, forcing the ref to stop the bout.

Cruiserweight Davin Clark (1-0) defeated Ignacio Zambrano (2-3) by way of a four-round decision as Clark was too tricky for Zambrano, who couldn’t handle the movement of Clark, who had eleven MMA fights, but is only now making his professional boxing debut.

Women’s bantamweight Iris Contreras (2-0) picked up a majority decision win over Beki Light (0-2) in a very competitive bout. Contreras won the first round, but the last three appeared very close with Contreras bleeding from her mouth. The bout was very close

Super middleweight Tony Munoz (1-0 1KO) got a first-round KO over Aaron Hamilton in the opening bout, the end came a little after a minute.

Jasper McCargo who was supposed to fight saw his bout fall through on fight day when his opponent never entered the venue. The day prior cruiserweight Mike Russell lost his opponent who pulled out of the bout a day before weigh-in.

17-year-old professional boxer Gabe Flores Jr. (6-0 5KOs) of Stockton, CA soundly defeated 29-year-old Cande Rochin (5-1 3KOs) at the Cox Pavilion in Las Vegas, Nevada. Flores Jr. dominated every single round of the fight against a much older fighter who was strong and came to win.

It was an impressive showing.

We had long since wanted the days of Adrien Broner of the lightweight division to return and we saw a large glimpse of it in his draw against Jessie Vargas at the Barclays Center in Brooklyn, New York. Broner, who changed trainers to train with Kevin Cunningham started slow, but thanks in part to honest and concise coaching in his corner and applying pressure, Broner showed the promise, that had many thinking he could be a future hall of famer.

Meanwhile, Jessie Vargas gave Broner all he could handle as the majority of people viewing the bout felt that Vargas won the first half of the bout with Broner taking over in the second half. Some had Broner winning, some had Vargas winning, regardless a draw felt like a fair score.

Despite a terrific main event, the ugliness ensued as a rap beef between rapper 6ix9ine and Adrien Broner had the Barclays Center looking like a war zone per some reports. Security was heightened as a farcical beef on social media bleed over into what on-site reporters felt was a tense environment at the Barclays Center. Security was heightened with multiple reporters talking about cops roaming the halls and officers not in uniform amongst the masses.

This truly was a sad overlay to a great night of fights as a nonsense overshadowed a great fight card.

Jermall Charlo is now the interim WBC middleweight title as he emphatically knocked out Hugo Centeno Jr. in the second round. Charlo outclassed the well-respected boxer, who was sent to the canvas by a tricky left hook that was fit in-between Centeno’s guard laying him out.

Ramblings from the undercard

Former world champion and three-time U.S. Olympian Rau’shee Warren picked up a decision win over Juan Medina as he won every round of an eight round bout.

Popular Brooklyn boxer Heather “The Heat” Hardy made a triumphant return to the boxing ring picking up a sound decision win over Iranda Torres. Hardy won the vacant NABF female featherweight title in the process

Amir Khan made a quick work of Phil Lo Greco, who appeared to have left his best days behind him as he looked like a majority of the camp was spent making the weight. Khan did what he had to do as he was too fast for Lo Greco and the offensive-minded Joe Goossen seemed to focus on a quick start.

The bout was the first fight on ESPN+, a pay platform for ESPN customers looking to watch coverage not seen on its televised networks.

Tommy Coyle knocked out Sean Dodd in the sixth round of their scheduled twelve round Commonwealth lightweight bout.

Also noteworthy was Conor Benn getting a technical knockout Chris Truman in the fourth round in a very competitive bout until the time of the stoppage.

The interim WBO featherweight title has a new home as Carl Frampton defeated Nonito Donaire Jr. do battle in Frampton’s hometown of Belfast, Northern Ireland on a card streamed on Showtime Sports on Facebook and YouTube.

The bout started competitively, but conditioning played a major factor as Donaire Jr. was unable to keep pace with Frampton later in the bout.

WBO bantamweight world champion Zolani Tete defended his title against Omar Narvaez in the co-main event of the aforementioned show in a dominant, but not very entertaining fight.

Lamont Roach Jr outpointed Orlando Cruz on my card in his Thursday night bout in Puerto Rico on ESPN2, but between the judges and the referee Roach left with simply a draw. The 130 pound Golden Boy prospect seemed in control the whole time and even more so when it appeared he dropped Cruz late in the bout, but the ref ruled it a slip. Needless to say, the bout was scored a draw Cruz the hometown fighter despite suffering multiple losses as opposed to Roach, who is undefeated.