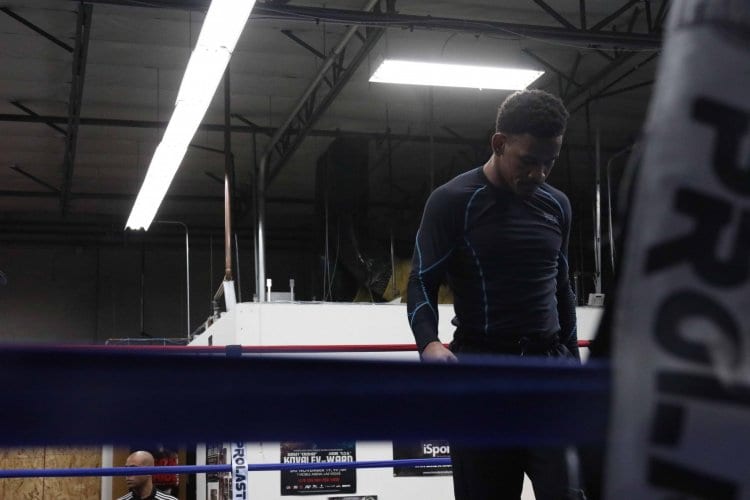 Happy bday to the coolest coach/friend I know @manuel.boxing hope you have a blessed day!!! #boxing #bdayfun

Magdaleno, a true puncher in the lower weight classes won his first world title against Nonito Donaire Jr. in November of 2016 in Las Vegas, Nevada. Magdaleno enlisted boxing coach Manny Robles, who has a stable of fighters including Oscar Valdez. Magdaleno had to use his boxing skills most notably his impressive footwork to edge Donaire in a close fight. Magdaleno only fought once since winning the belt as he defeated Adeilson- Dos Santos by way second round KO.

Dogboe, on the other hand, is a 23-year-old fighter from Ghana, who has shown serious power but against limited opposition. Dogboe’s last win a stoppage of Cesar Juarez, a man who gave Nonito- Donaire Jr., a very competitive bout raised some eyebrows as Dogboe looked to make the jump from prospect to contender. The question is with Dogboe how massive is his punching power and on top of that, how will he do with the movement of Magdaleno.

The most noteworthy bout of the weekend

Round 2 for the sixers! My rounds start the 28th lets get them last minute tickets. It’s cooking up crazy. @thebloklife

Bryant Jennings vs. Joey Dawejko is an old school pick’em fight between two heavyweight contenders looking to land a big fight. Jennings, who is signed with Top Rank is the favorite, but has also looked very human in his last few outings.

Dawejko is a hard luck pro, who has never quite had a promotional push seemingly taking fights at inopportune times and fighting for the sake of fighting. Dawejko is a massive power puncher with a decorated amateur career, more so than Jennings, but has had cardiovascular issues with his punch output at times.

This is a can’t miss fight with the winner more than likely getting Joshua Parker in his return to the ring or a fight against the big two in the division, either Deontay Wilder or Anthony Joshua.

Ticket link in my bio, I’m bout to smoke cuz on the 28th in Philly. #NewarkMade

On the undercard of the Top Rank card in Philadelphia, Jesse Hart will be back in action in his hometown. Hart is looking to build momentum into what seems like an eventual rematch with Gilberto “Zurdo” Ramirez.

2016 U.S. Olympic silver medalist Shakur Stevenson will be back in action. Stevenson is one of the most talented amateur boxers I have seen in the last five to ten years, who is fighting an undefeated fighter with over double his fights. Fans can knit pick Stevenson’s “power”, but the truth is Stevenson has taken hard fights to start his career and has impressed me every step of the way starting his professional career so tough.

Power-punching Joseph Adorno will be in action and the devastating puncher is a site to be seen in developmental fights as it is hard to see a four-round fighter being able to take his power as none of the four-round fighters could take Adorno’s power and this being Adorno’s third fight of the six-round variety.

Featherweight Christian Carto of Philly will also be featured on the card is one of the most active fighters currently in the sport as he has fought fourteen times in a less than two years of being a professional boxer.

Daniel Jacobs back on HBO

Putting on a lil show for my Brooklynites this afternoon at media workouts at @barclayscenter. #TeamJacobs ?: @muls96 / @hboboxing

Middleweight Daniel Jacobs is back as he headlines a card from the Barclays Center in Brooklyn, New York, against Maciej Sulecki, who is moving up to the middleweight division for an opportunity to fight on HBO and bigger fights if the fight goes his way. Jacobs, who is truly a special fighter will have the speed advantage as well as an edge in punching power. Sadly, though every fight is a fight, most fans are looking past this fight in hopes we get Jacobs against one of the big names in the division soon.

Jarrell “Big Baby” Miller, one of the more interesting modern heavyweight who has the gift of gab and the relentless pressure of Jarrett Hurd combined in one will face a former, Johann Duhaupas. Miller is looking to parlay a statement win on HBO to land a fight with Anthony Joshua, a fight that Eddie Hearn who is promoting this card has foreshadowed in interviews leading up to this bout.

2012 Irish gold medalist Olympian Katie Taylor will return to action as well as she is one of the marquee names in women’s boxing hoping to push equity for both genders in pay and recognition in the sport of boxing.

Welterweight contender @joselopez is eager to get back in the ring and make his long-awaited debut in Texas when he faces unbeaten Miguel Cruz this Saturday night on #PBConFOX. #LopezCruz #RiversideRocky

Welterweight Josesito Lopez will look to revive his career as he faces untested prospect Miguel Cruz on FS1 in the main event for a card taking place in Texas. For Lopez, this is win or go home as a loss to a prospect at this stage in his career would push Lopez so far away from a fight for real money that boxing might not finically make sense anymore. Lopez has been training with Robert Garcia’s famed boxing academy in Riverside, Ca, as he looks to make one more run.

Miguel Cruz is a welterweight prospect who has yet to face a truly formidable foe as he has faced tough fighters on the regional and mid-tier cards, but yet to face world-class opposition. This bout will tell a lot about both fighters

Anthony Dirrell vs. Abie Han is a trajectory bout. Dirrell is still viewed as a light heavyweight that could do something of note whereas Han’s days of being touted as prospect appear done after losing to Glen Tapia on ESPN2, years ago. Dirrell in theory, should have his way with Han, who is a pressure fighter that lack the intricacies at times to make trickery, more skilled fighters hesitant when counterpunching.

Jorge Lara vs Claudio Marrero will see the furious puncher, Lara looking to continue his violent KO ways against Marrero, a very good fighter, who has only lost to the elite fighters that he has fought being Jesus Rojas and Jesus Cuellar.

Lara is most known for his brutal first-round knockout of Fernando Montiel, but has only fought once since that bout, two years ago.

A gem of an undercard fight will see super lightweight Ryan “The Cowboy” Karl taking on Kevin Watts in a bout that will send one fighter into the wrong corner for the majority of their second half of their career and give the winner new hope in the division.

April 28th in El Paso, Texas #HammerTime #ManDown The Real Is Back

Junior middleweight Erickson Lubin will return for the first after being brutally knocked out in the first-round against Jermell Charlo last October.

Giovanni Santillan will headline a Thompson Boxing card from their home base of Doubletree in Ontario, CA.Santillan is an undefeated 23 win welterweight looking to land a world title fight in the not so distant future.

The co-main event will feature the talented bantamweight Saul Sanchez on the undercard as well as lightweight George Acosta.

What could steal the show in terms of weekend excitement, the Jose Sulaiman (AKA the boss at the WBC) is holding a tournament along with Real Deal Promotions in the welterweight division below are the bouts taking place this Friday.

Diaz, the favorite going into the tournament will face a tough pressure fighter in Santana, who has the exact style Cuban boxers tend to struggle against that could see for an entertaining affair.

Chris van Heerden best known for his Conor McGregor sparring video as well as his bout with Errol Spence Jr. will face Schwarzkopf, a relatively unknown fighter, who have struggled to figure out much about.

Both fighters are seemingly tough opponents facing one and another. Lawson has double the experience and fought the tougher competition. It is important to notice Nasiyiwula has only fought in Asia with all his wins coming in China.

Former Top Rank prospect Brad Solomon, who was highly touted at one point with get a road to redemption as he faces Paddy Gallagher, a fighter that he should have a healthy advantage over.

Fan favorite and San Francisco welterweight legend Karim Mayfield stepped up on two weeks notice to take a fight with relatively unknown Sergey Lubkovich, a fighter who has only fought in Russia for his whole career. Mayfield has a fought the best of the best and been heavily avoided and is coming off a big win in his hometown.

This is a big test for Lubkovich.

Janelson Bocachica of Detroit, a powerful junior middleweight, women’s junior lightweight Alycia Baumgardner who the promotion has high hopes for and highly decorated cruiserweight Joshua Temple round out the undercard

Lejarraga is a power-punching welterweight, who is largely unproven. Skeete is a talented British commonwealth fighter, who is struggling to get beyond that. This is a fight for hardcore fans looking for a boxing fix.

Vanes Martirosyan ready for Gennady Golovkin on May 5th

Cecilia Braekhus vs. Kali Reis added to Golovkin vs Martirosyan