Lukie Ketelle
0 0 0
Split-T  Management is proud to announce the signing of undefeated super middleweight and former National Golden Gloves Champion, Isiah Jones.
Jones of Detroit, has a record of 6-0 with three knockouts.
The 23-year-old Jones was 52-2 as an amateur and was the 2016 National Golden Gloves champion.
Jones, who was mentored by longtime and respected Detroit boxing man, Carlos Llinas, possesses a fan-friendly style, as he likes to apply relentless pressure to his opponent.
His strengths are his natural instincts, and physical strength.  Jones is a fearless fighter who likes to mix it up with his opponent.
“We are very excited to have a fighter like Isiah in the Split-T Management family,” said Split-T Management CEO, David McWater. “Isiah will be the 5th National Golden Gloves Middleweight Champion I have on my roster!”
“I am very excited to sign with Split-T Management because this is a big opportunity for me to get to the next level of boxing,” Said Jones. ” Everyone will love seeing me fight because I’m all action.  My boxing idol is Marvelous Marvin Hagler and I have adopted his motto ” Seek and Destroy!”  My style is to impose my strength and will on an opponent, inflict as much pain as possible so they realize there is nothing they can do to beat me”.
Said Carlos Llinas, “I have been following Isiah’s career since he was an amateur winning two Detroit Golden Gloves Championships. Detroit is going to see a fighter that will remind you of the Michigan greats of yesteryear.”
Tags:5thDavid AtwaterDavid McWatergolden glovesIsiah Jonesnational championSplit-T Management
Previous post

Rey Vargas ready for "Crazy A" Hovhannisyan on May 12th 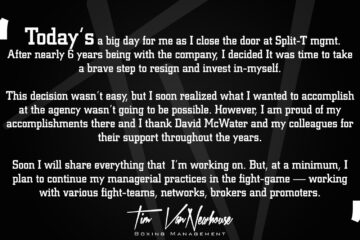