Lukie Ketelle
0 0 0
On Saturday night, DiBella Entertainment returned to the Fox Theater at Foxwoods Resort Casino, in Mashantucket, CT, with another action-packed installment of its popular Broadway Boxing series, presented by Nissan of Queens, Azad Watches, OPTYX, Christos Steak House, and Gagliardi Insurance. The entire card was streamed on Live.DBE1.com, part of the SportsLive OTT service, as part of a partnership with CBS Sports Digital. 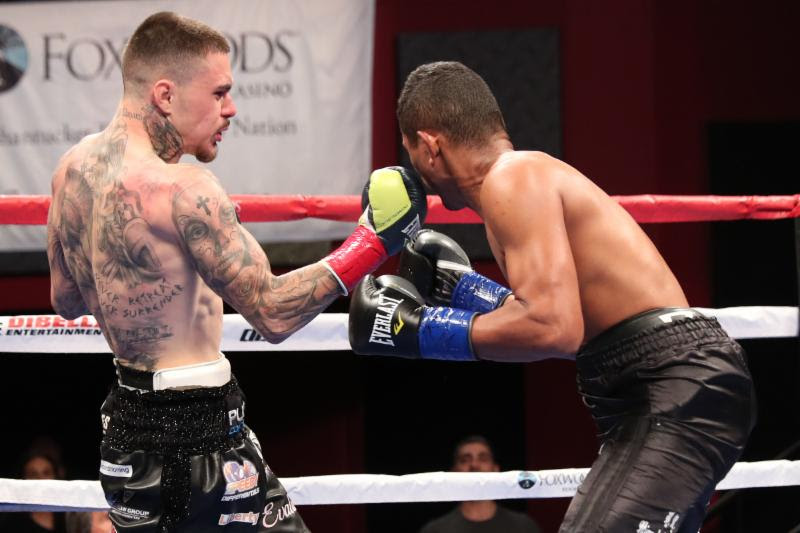 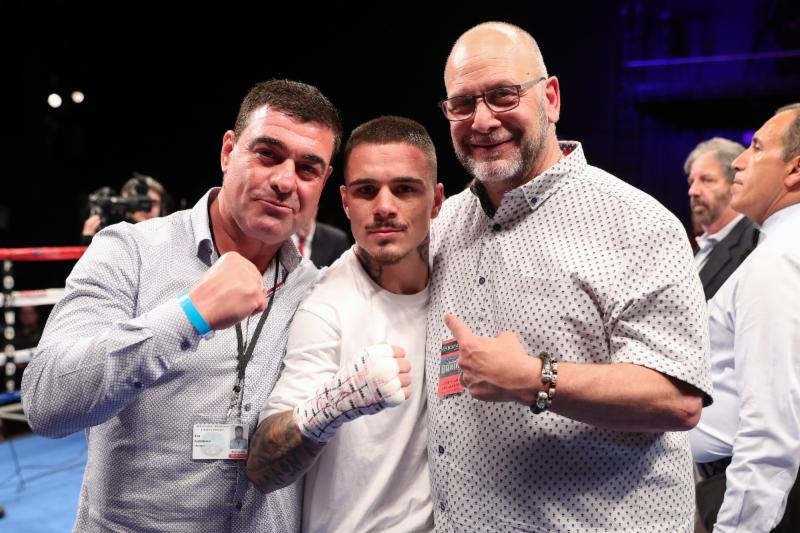 (Photo Credit: Ed Diller/DiBella Entertainment)
In the main event, Australian world-ranked lightweight contender “Ferocious” George Kambosos Jr., 136, of Sydney, impressed in his DBE and US debut, demolishing Jose Forero, 140, in just 108 seconds. Kambosos felled Forero, of San Francisco, Panama, twice with his powerful straight right. The contest concluded shortly thereafter when Kambosos battered Forero with a barrage, ending with a cracking left hook to force a stoppage. Ranked #5 by the WBA and #11 by the WBO, Kambosos is now 14-0 (8 KOs), while Forero dropped to 13-7-1 (11 KOs). He is training in Los Angeles under the guidance of a fellow Australian transplant, former heavyweight contender Justin Fortune. 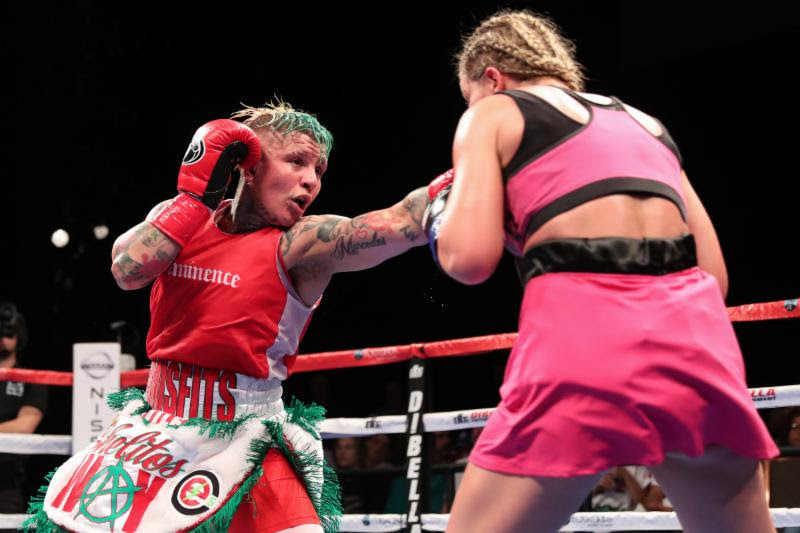 (Photo Credit: Ed Diller/DiBella Entertainment)
Making her ninth appearance at Foxwoods Resort Casino, the popular Shelly “Shelito’s Way” Vincent, 127, of Providence, RI, battled Budapest, Hungary’s Edina Kiss, 127, for 10 rounds. Managed by Mike Criscio and trained by Peter Manfredo Sr., Vincent consistently pressured her way inside to land shots to the body, often followed by her overhand right. Down the stretch, Vincent had success with her left hook upstairs. Kiss boxed well over the second half, doing her best to keep Vincent at bay with jabs and footwork. Two scorecards favored Vincent via shutout at 100-90, but the third judge had a different perspective, acknowledging Kiss’ effort to call the bout a 95-95 draw, resulting in a majority decision victory for Vincent, now 22-1 (1 KO). Kiss’ record dropped to 14-7 (8 KOs). Vincent has won four straight since her only defeat in August 2016 via majority decision to Heather Hardy in what The Ring Magazine hailed as the “Female Fight of the Year.” She was honored by the Connecticut Boxing Hall of Fame as their “Fighter of the Year” in 2016, becoming the first female recipient of the award. 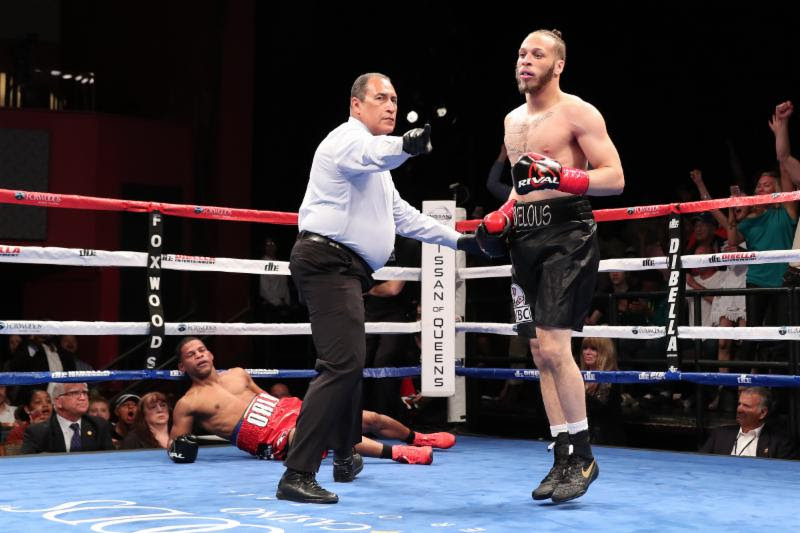 (Photo Credit: Ed Diller/DiBella Entertainment)
“Marvelous” Mykquan Williams, 139, of East Hartford, CT, made quick work of Orlando Felix, 139, of Toa Baja, Puerto Rico, stopping him inside the opening frame. A straight right wobbled Felix into the blue corner then a follow-up barrage dropped him. Though Felix arose, another barrage of shots forced the referee to call a halt to the action at the 2:22 mark. Now 11-0 (7 KOs), Williams captured the WBC USNBC Silver super lightweight title. Felix suffered his second defeat, dipping to 12-2-1 (4 KOs). Promoted by DiBella Entertainment and managed by Jackie Kallen, Williams is trained out of Manchester Ring of Champions Society boxing gym by local legend and community leader Paul Cichon, whom he’s known since he was a child and looks upon as a surrogate father. Williams was a decorated amateur with a 45-13 record, highlighted by three gold-medal performances at the Ringside World Championships, in addition to winning the PAL Tournament and Silver Gloves Championships.
Massachusetts State rivals Khiry Todd, 143, of Lynn, MA, and Adrian Sosa, 142, of Lawrence, MA, engaged in a thrilling six-round welterweight contest between two unbeaten prospects. A fast-paced opening round saw both combatants landing their jabs to set up combinations and Sosa struck first with straight rights and left hooks. Sosa caught Todd with a barrage to start the second and straight rights appeared to bother him, though the Lynn resident collected himself to box well in the final minute. The third frame began with furious exchanges on the inside then Sosa regained control with his jab and straight right from a distance. Todd was more aggressive in round four, finding his target with stinging straight rights and left hooks. They traded left hooks in the fifth, and while Sosa seemed to do more damage, Todd again picked up the pace in the final minute. Sosa controlled the last round with a focused attack on the body. The judges tallied 57-57, 59-55, and 58-56, awarding the majority decision to Sosa, now 7-0 (5 KOs). The first blemish on Todd’s ledger left him at 7-1 (5 KOs). The 22-year-old Sosa was a 2014 New England Golden Gloves champion and turned pro in July 2016 following an 18-2 amateur career. 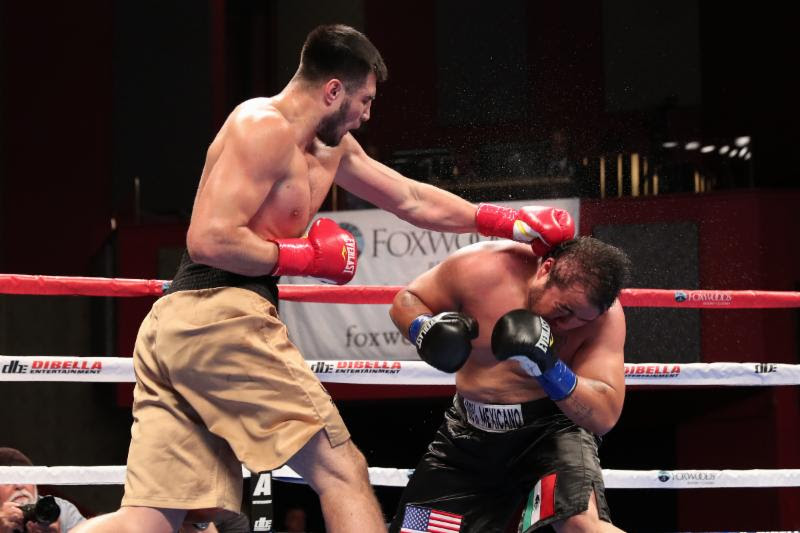 (Photo Credit: Ed Diller/DiBella Entertainment)
Heavyweight 6’6″ southpaw and 2016 Olympian for his native Uzbekistan, Bakhodir Jalolov, 244, made his pro debut against Mexico City’s Hugo Trujillo, 256. Trained by Pedro Diaz out of Miami, FL, Jalolov prodded with his jab early to measure the distance to land short, compact straight rights against his much shorter foe. A series of damaging left hooks floored Trujillo in the second frame. By the third, Trujillo was clearly fatigued and a straight left staggered him. Another left hook dropped the Mexican for a second time. He arose on unsteady legs resulting in a stoppage at the 1:14 mark. Trujillo, now 4-1-1 (2 KOs), suffered his first defeat. This contest was promoted by DiBella Entertainment in association with Fight Promotions Inc. 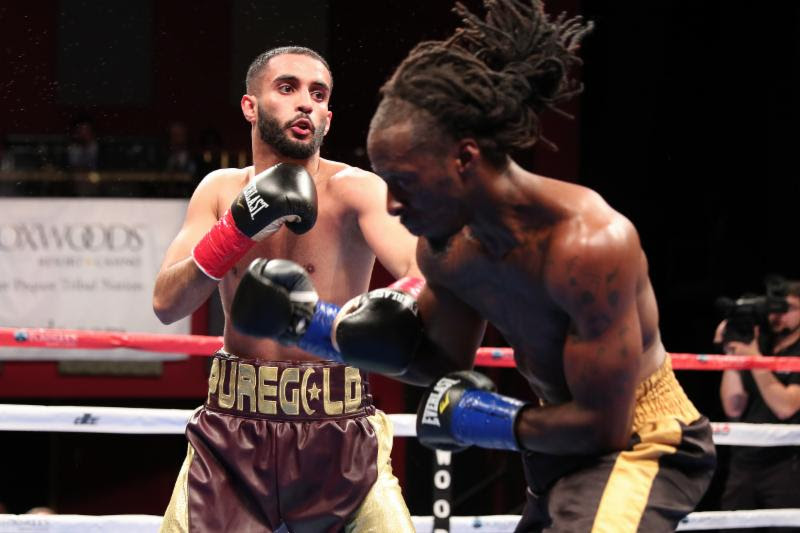 (Photo Credit: Ed Diller/DiBella Entertainment)
Trained by Don Saxby out of Gleason’s Gym, Brooklyn’s Khalid “Pure Gold” Twaiti, 125, patiently looking for openings to land stiff jabs and his straight right hand on Joseph Cole, 129, of Marrero, LA. A left hook and overhand right hurt Cole in the opener. An overhand right followed by a left hook dropped Cole midway through the second. A thudding left hook knocked Cole out cold 35 seconds into round three. With the knockout victory, Twaiti is now 3-0 (2 KOs), while Cole’s record hit 1-6 (1 KO). Twaiti turned pro in February 2017 after compiling a 74-15 amateur record.
Lamont Powell, 156, of Pawtucket, RI, successfully debuted as a professional, winning a four-round shutout on three scores of 40-35 against Boston’s Amadeu Cristiano, 162, now 0-2. Powell’s edge in speed was quickly evident and was key to his dominant performance. Powell consistently jabbed to the head and body and was adept at countering his foe’s aggression with stiff jab-straight right combinations. Cristiano lost a point in the fourth for holding and hitting.
In a junior lightweight bout scheduled for six rounds, Irvin Gonzalez Jr., 128, of Worcester, MA, squared off against veteran Jonathan Perez, 130, of Barranquilla, Colombia. Gonzalez began the bout often switching stances to confuse his foe and create openings. A right uppercut-straight left combination hurt Perez in round one. The second stanza saw Gonzalez doubling and tripling his left hook to both the head and body; a straight right had the Colombian wobbling into the ropes near the bell. Gonzalez ended the contest in the third with a left hook to the body followed by a left uppercut to drop Perez for a full 10-count. The stoppage came 42 seconds into round three to up Gonzalez’ record to 10-0 (9 KOs), while Perez dipped to 37-21 (29 KOs). Trained by his father Irvin Sr., Gonzalez was an accomplished amateur, winning the New England Golden Gloves in 2015 and participating in the 2016 Olympic Trials, while compiling a 90-15 record.
Davhon Shelton, 136, of Pawtucket, RI, successfully turned pro, winning a four-round unanimous decision against Carlos Galindo, 138, of Woburn, MA, with three tallies of 39-37. For much of the contest, Shelton’s pressure had Galindo in retreat. Whenever, Shelton had Galindo backed into a corner, he would unleash a volley of body shots. Galindo has lost all three of his professional bouts. 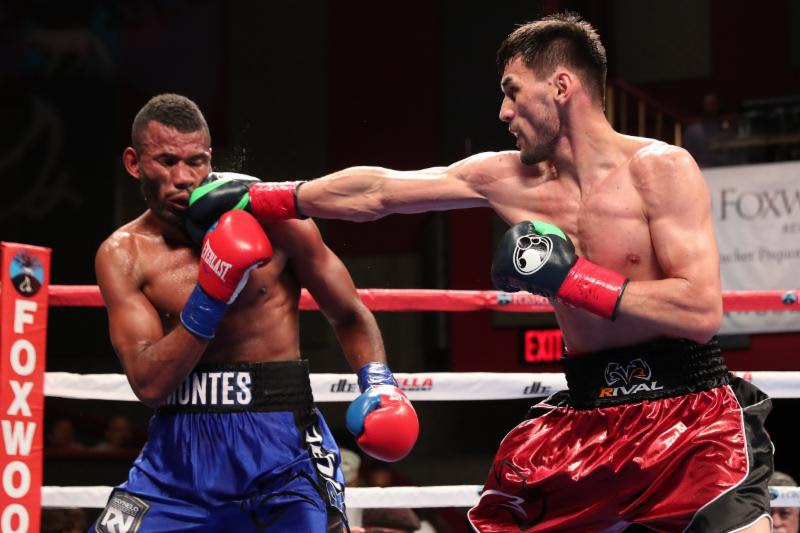 (Photo Credit: Ed Diller/DiBella Entertainment)
Born in Uzbekistan, but now living and training in Brooklyn, NY, with Andre Rozier, Hurshidbek Normatov, 155, outboxed hard-hitting Colombian Ronald Montes, 154, of Barranquilla, over six rounds to earn a shutout decision with three scorecards of 60-54 in his favor. The southpaw Normatov easily evaded most of Montes’ offensive attempts then countering with his jab and straight left. As he warmed up, Normatov’s arsenal also included right hooks and combinations downstairs when he worked his way inside. With the win, Normatov improved to 6-0 (2 KOs), while Montes dropped to 18-9 (16 KOs). Promoted by DiBella Entertainment and managed by David McWater’s Split-T Management, Normatov was an experienced amateur competing in 324 bouts and winning the 2014 European National championship.
Tags:Broadway BoxingGeorge KambososGeorge Kambosos JrLou DiBellaMay 5thResultsShelly Vincent
Previous post 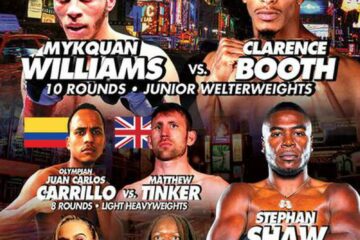