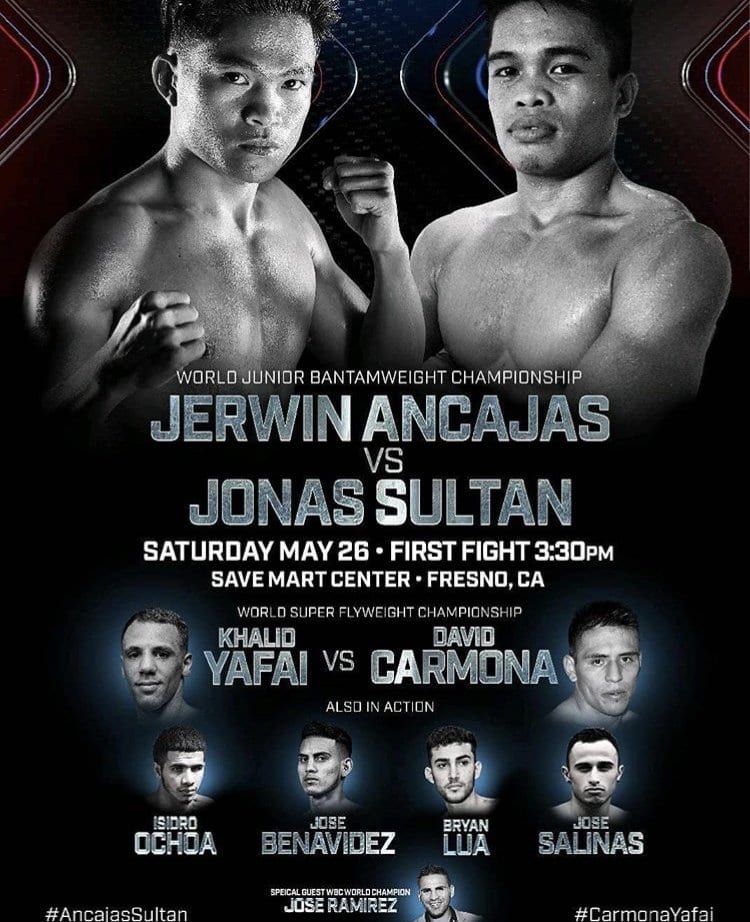 IBF super flyweight champion Jerwin Ancajas will make his second defense of his title Jonas Sultan at the Save Mart Center in Fresno, CA, as history will be made in this Filipino versus Filipino bout. Ancajas is the favorite and the fighter with the major promoter, Top Rank Inc, but Sultan is a game opponent who is going largely unnoticed based off the fact that his career has been mostly in Asia.

The bout will be televised on ESPN+, the new ESPN streaming service.

2008 British Olympian and WBA super flyweight champion Khalid Yafai will make his U.S. debut on the same card as it appears Yafai will more than likely face the winner of the main event. Yafai, who is from the Olympic class as James DeGale, Billy Joe Saunders and David Price, seems to have had least amount of buzz in his build-up as his fellow Olympic champions, Yafai will look to change that in his U.S. debut.

Top Rank is extremely high on Madera, CA’s lightweight Bryan Lua, who trains with Robert Garcia in Riverside, CA. Lua will look to make short work of his opponent as he is booked to return in the same building, the Save Mart Center on July 7th.

Featherweight Isidro Ochoa of Fresno, CA will make his return to Top Rank shows as he fights on the undercard as well and like Lua will return July 7th on the Jose Ramirez card as long as he doesn’t take too much damage, a cut or something odd doesn’t happen.

Super featherweight Jose Salinas of Fresno, CA will return to action after headlining a card earlier this year in Fresno, CA. The Joel Diaz trained fighter is looking to gain more professional experience as he is early in his career.

In a bout that has no television distribution besides sketchy streams that some might wander around the internet to find, WBA bantamweight champion will defend his title in enemy territory as he faces highly-touted and heavily hyped Naoya Inoue, who is moving up to the bantamweight division.

McDonnell is an underrated fighter in terms in terms of his resume with the major hallmark being two wins over Tomoki Kameda during the advent of the Premier Boxing Champions league. McDonnell is a fighter who never cheats a training camp as he comes in shape for every fight as well is a great boxer.

Naoya Inoue is a massive puncher and monster of a man in the lower weights. Inoue has tremendous power reminiscent of a young Nonito Donaire Jr. The big question now is where Inoue’s ceiling in terms of moving up in weight will come.

Inoue is a favorite despite being the challenger, because of his potential, his ring intelligence and scary power.

The winner of this bout will be entered in the World Boxing Super Series bantamweight tournament.

Super lightweight Eddie Ramirez is looking to rebound from his first career loss which was a first-round knockout to Antonio DeMarco as he fights former world champion Argenis Mendez in a bout on FS1. The bout will serve as a way to see the trajectory of Ramirez’s career after a dramatic and unexpected loss.

Tugstogt Nyambayar is a decorated amateur who is being fast-tracked in the professional realms whereas Oscar Escandon is a veteran tough guy who has only lost to world champions. Nyambayar not unlike many prospects showed some inexperience as in his last outing as Nyambayar was dropped by Harmonito Dela Torre. Escandon is more skilled but smaller than Dela Torre with a relentless style.

This not unlike the main event will show us what Nyambayar’s ceiling is to a certain extent.

Undefeated Golden Boy Promotions super featherweight prospect Jousce Gonzalez, who has won all seven of his bouts via a first-round knockout will headline a card in Santa Monica off television. Gonzalez is in with an experienced, but not so much dangerous foe with hopes more than likely is that he leaves the first round for the first time in his career

Irish amateur standout Aaron McKenna will look to continue his knockout streak as McKenna tries to make it three knockouts in a row in the beginning of his career.

Rommel Caballero had a rather lackluster professional debut as a head clash which caused a cut over his opponent’s eye forced the bout to be called off in the first round making it a technical draw. Caballero from the famed Caballero boxing family

David Lemieux is going to take a stay busy fight off television as Lemieux looks to rebuild his career after his devastating loss to Billy Joe Saunders. Lemieux will look to get back to his knockout magic and take a fight against one of the bigger names in the division as he heads into the twilight of his career.

Pedraza, Stevenson and Benavidez added to Crawford vs Horn undercard