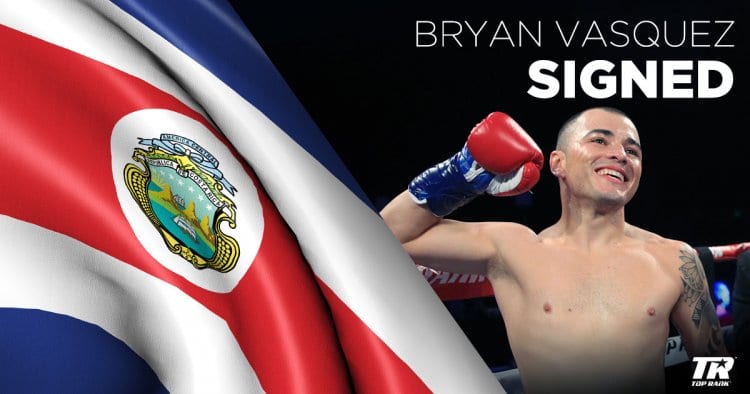 Top Rank has signed former two-time interim WBA super featherweight champion Bryan Vasquez to a promotional contract, Bob Arum announced today. Vasquez (37-3, 20 KOs), from San Jose, Costa Rica, is 30 years old and has been fighting at the world level for nearly a decade. His debut under the Top Rank banner will be announced soon.

Vasquez is currently ranked No. 8 by the WBA at 130 pounds and is angling for a third world title shot.

“I feel really happy. I feel blessed to be signed by the biggest company in the sport of boxing,” Vasquez said. “I want to rule the 130-pound division. I’m ready for big names, whether it’s Christopher Diaz or Oscar Valdez. They better watch out now that I’m with Top Rank. I will show everyone that Vasiliy Lomachenko is beatable, and in the near future, I want the rematch with Ray Beltran with proper notice now that I have a real promotional company behind me. I’m happy and motivated.”

“We are really grateful for this opportunity,” said Hector Cordova, Vasquez’s manager. “Bryan fought Beltran with three weeks’ notice and a broken hand in the second round and still managed to make him look bad. We will be working with Jose Benavidez Sr. in our corner, and we are here to make history. We are with the top promotional company in the sport, so we’ll see if the top guys keep on hiding.”

Vasquez fought Beltran last August for the NABF and NABO lightweight titles, dropping a majority decision after putting forth a spirited effort. Beltran would go on to win the WBO lightweight title in his next bout. Vasquez rebounded on Feb. 24 in Pérez Zeledón, Costa Rica, stopping Miguel Gonzalez in the 11th round of a bloody contest. The Gonzalez victory earned Vasquez the WBA Fedelatin belt.

After more than 100 amateur bouts, Vasquez turned pro in 2005 and won the interim WBA super featherweight title in 2011 with a 12-round unanimous decision against Santos Benavides. Following a ninth-round TKO over Jorge Lacierva, Vasquez fell short in his first world title challenge, getting knocked out in the seventh round by longtime WBA super featherweight champion Takashi Uchiyama. In 2013, Vasquez won the interim WBA super featherweight title for a second time with a technical decision over René González and defended the belt with a unanimous decision over Jose Felix Jr. in April 2014 on the undercard of the Manny Pacquiao-Timothy Bradley rematch in Las Vegas.

His second world title challenge — for the vacant WBA super featherweight title — came on May 29, 2015, in Brooklyn, New York, and he was outboxed by Javier Fortuna en route to a unanimous decision loss.

Vasquez is 2-1 since the Fortuna defeat and is re-energized as he sets his sights on another world title run. A boxer-puncher who is a natural southpaw, Vasquez fights out of the orthodox stance but is effective fighting as a southpaw as well. Boxing also runs in his family. He is married to WBA and WBO female 154-pound world champion Hanna Gabriels (18-1-1, 11 KOs). 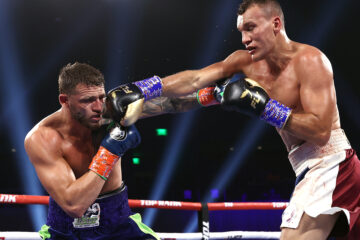