Lukie Ketelle
0 0 0
The Azteca Boxing Gym in Oklahoma City hosted a media workout for the biggest fight card to hit the city in years.

This is what the fighters had to say.

“I am very excited to be in Oklahoma because since I arrived in the city I have been feeling the love and good vibes of my countrymen, from the fans and from the family of Saucedo. Everyone has shown their support.”

“The weather in OKC is like the warm weather of my hometown of Mazatlan, Mexico.”

“I feel that there will be a lot of Mexicans fans supporting me in the arena on Saturdaynight and that motivates me a lot. I come well prepared to defend my title and bring it back to my country.”

“I want to give the fans a good fight, and I want to show that I am the best fighter in the division.”

“I grew up on the south side of town, right near the arena, so this is truly a homecoming for me. I used to ride my bike past the arena and go to basketball games and monster truck events here. I can’t wait to get in there, get the win, and feel the support of the home fans. It has been a long time coming.”

“I want any of the champions at 140 pounds. I want a title shot, and I know beating Lenny Z will help me earn a title shot.”

“I had a 12-week training camp in Big Bear, which was the longest camp of my career. All I did was eat, sleep, and train. In order to become a champion you have to make the sacrifices. I put in the work alongside my trainer, Abel Sanchez.”

“I’ll give my best. I can assure that the fans will be very happy with the fight. We’ve worked to take the title to Colombia. It’s a long trip and it’s been a strong preparation, so taking the title home is the least we expect.”

“Ramirez is a great world champion, which is why I think it will be an interesting fight. I’m sure he will also be prepared to give his best. I know it will be an excellent fight.”

“This is a great fight. Out of all my fights, this is one of the ones I’m really excited about. ESPN, it’s on a great card. Winning this fight will give me great opportunities after. This is massive for me. This is a fight I need to win to get back there on top of the world.”

“When you overcome {a hostile environment} to win, it makes it that much better. That gives me more adrenaline. It’ll be good. The crowd will be there for Saucedo, as they should be. When this opportunity came my way, I knew what I was up against. I’m ready.”

“Boxing is repetition, so we’re working on the same things we did last camp. {Trainer Al Mitchell} really wants me to start sitting down on my punches, stay behind my jab, and make the small but really important changes from the amateurs.”

“My opponent {Sheena Kaine} is the tallest fighter I’ve faced as a pro. I might be looking up a little bit this time around. I like fighting tall people. They’re open. She seems to be pretty straight up.”

“I’m so excited. Not only is the fight in Oklahoma, but it’s in the biggest arena. Just to step foot on the floor where the Oklahoma City Thunder play is incredible.”

“The hand injury kind of sucked and was kind of awesome at the same time. It sucked because I was out for so long, but it was awesome because I had a chance to learn. I never took any time off at the beginning of my pro career. The whole time my left hand was in a cast, I used my right. I worked on a lot of things that I needed to learn, since I didn’t have an amateur career. I’ve improved a lot, and I can’t wait to demonstrate it on Saturday.”

“I’m lucky my father {Tommy Morrison} did what he did. I admit I wouldn’t have much of a following if it wasn’t for him. I’d have to come up the same way any other fighter does. For me, as far as getting fans, it’s been a little easier because of who my dad was.”

“My passion to have another opportunity in what I love to do is driving me. I’ve always loved boxing. I’ve cleaned my life up. I’ve had a lot of ups and downs and crazy episodes in my life that took a lot to overcome. I did it, and I praise myself and praise God. As I surrendered my life over to him, he opened the door. I am doing what I’m meant to do. I’m doing it 100 percent now.”

“I fight for my Brazilian people, and I am looking forward to showcasing my talents on ESPN. This is an opportunity for boxing fans to see the real Robson Conceicao.”

“Brazil won today {2-0 over Serbia} in the World Cup, and just like my countrymen, I will be victorious come Saturday night.”

Promoted by Top Rank, tickets to this world championship extravaganza are ON SALE NOW. Priced at $200, $100, $60, $40 and $25, not including facility and service fees, tickets may be purchased at the Chesapeake Energy Arena box office, online at Ticketmaster.com, all Ticketmaster outlets or by phone at 1-800-745-3000. 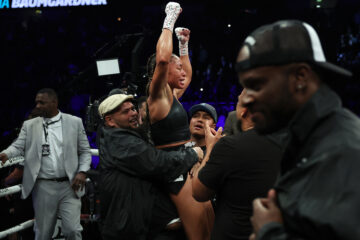