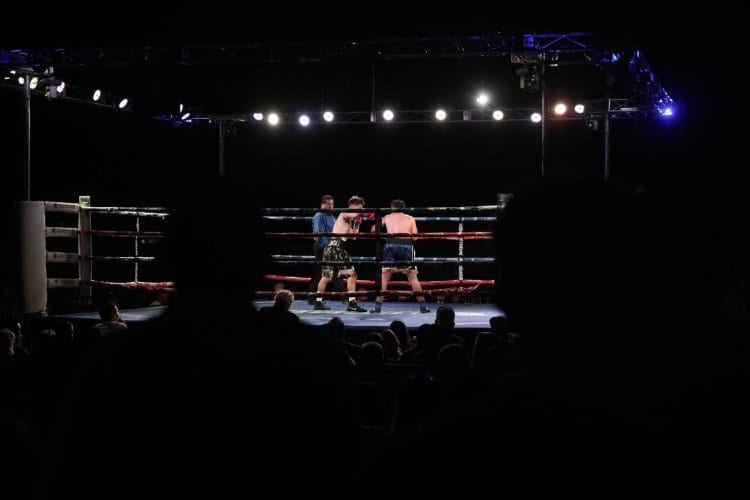 Undefeated WBO super middleweight champion Gilberto “Zurdo” Ramirez will be making his fourth defense of his title on Saturday night in Oklahoma City, Oklahoma as he faces Roamer Alexis Angulo in a twelve-round main event. Ramirez at his best is a tricky southpaw who defies stereotypes that Mexican boxer are brawlers and bangers as Ramirez is as tactical as they get.

Angulo has little tape to watch on the internet, not unlike his last foe, Habib Ahmed, but this should be another fight in which we see the talent that is “Zurdo” Ramirez, who is looking to jump into the pound-for-pound conversation.

On June 9th, Ramirez also told me that he is welcoming any and all fights after this bout meaning that a bout with another name in the division could be coming soon, I have a gut feeling a Jesse Hart rematch, could be in store down the road.

Super lightweight Alex Saucedo of Oklahoma City is a fun fighter to watch as he comes to exchange and throw a flurry of punches and look for that to intensify as he fights Leonardo Zappavigna in his hometown of Oklahoma City.

Saucedo is a fighter who fights with his emotions on his sleeves and Zappavigna is a fighter who has a lot of power, this is the type of bout that could come out of nowhere and be a crackerjack of a fight.

If Saucedo wins, he could potentially find himself in a bout with Jose Ramirez in the near future.

Welterweight Mike Alvarado will be returning on the undercard as the boxing star looks to return to past glory and build himself up for a fight against a veteran of the sport for big money. Alvarado has given the fans a lot of classics over the years and well, I hope he lands a big fight.

Super lightweight Julian “Hammer Hands” Rodriguez is a powerful fighter, who has seen inactivity slow-down his career. Hammer Hands has been out of the ring for nearly a year, the clock is ticking for Rodriguez and he needs to make these bouts count.

Future women’s lightweight world champion Mikaela Mayer will be in action on the undercard. Mayer is a special talent in the sport of boxing with model looks and great knowledge of distance. Mayer is the type of fighter who is capable of bridging the gap between male boxing fans who don’t watch women’s fights typically to give it a go.

Chris Zavala, who just signed with Top Rank Inc., will make his promotional debut on this card.

Featherweight Michael Conlan will be making a homecoming in Northern Ireland rather than fighting Oklahoma City for his promoter Top Rank’s show. Conlan has had highs and lows in his professional career, but one thing is for sure, he is still developing.

Conlan hasa loyal fanbase and this crowd should be electric.

Featherweight Ruben Villa of Salinas, CA has a pattern of fighting when I am out of town and putting together terrific performances, both of which seem to happen like clockwork. Villa is amongst five or so fighters in the world that are truly special in this generation. Villa, a contemporary of Shakur Stevenson.

Vila is a decorated amateur with fast-feet and good hand speed along with a very high boxing IQ that makes him one of Thompson Boxing’s best fighters. Villa is something special and seeing him live in no small feat as you will more than likely be watching a feature world champion in action

Heavyweight LaRon Mitchell of San Francisco, Ca is back in action on Saturday night in Sacramento, CA at the Omega Products International Outdoor Arena, but he will be doing battle with Rodney Hernandez, a man he knows well, if not too well.

Mitchell and Hernandez have sparred countless times with the fighters rotating taking turns driving from San Francisco, Ca to Modesto, Ca and vice versa. The battle shows the business of boxing at a certain level, even if you with a major promoter like Thomspon Boxing, you have a limited pool of opposition to face and essentially, one day you could fight someone that you know very well.

It is no secret I am friends with LaRon Mitchell and the one smoker (boxing bout) I did, I had two people in my corner, one of whom was Mitchell. The bout underlines something sad about boxing, that despite friendship and a common experience, boxing is a business and a dangerous business at that.

When LaRon Mitchell heads into the ring on Saturday night in Sacramento, Ca, he will hope to propel himself into a bout on national television, but Saturday night, he will be fighting someone who knows him very well in a bout that

Light heavyweight Ryan “The Rhino” Bourland has fallen on tough times, but hopes this Saturday will be the start of something new as he faces undefeated Nathan Davis Sharp in Sacramento, CA on June 30th at the Omega Products International Outdoor Arena.

Bourland earlier this year lost his GBO light heavyweight title to Jose Hernandez via split decision only to have his grandmother pass away not that long after, this week Bourland posted that his mother who had been battling cancer had passed away during fight week.

Bourland, one of the most likable fighters in boxing is facing one of his toughest foes to date in a bout that defines his career and puts to rest a lot of his sad times this year.

Sharp may only be 3-0, but has won every bout by knockout with two of his three wins coming when he was coming in as the “opponent” (the person who ought to lose) on local cards.

This is a bout not be missed.

WBU cruiserweight champion Blake “The Beast” McKernan of Sacramento, CA will rematch Miguel Cubos after their first fight was a fairly dominate win for McKernan despite Cubos landing better than any of McKernan’s other opponents. The two have traded words on social media and now a rematch is set.

Lightweight Pedro Moreno of Sacramento, CA will face unbeaten Luis Zarazua in an eight-round bout. Moreno, one of the fighters signed to legendary manager Herb Stone, before he pasted, is looking to climb up the ranking and enter into the conversation of other fellow lightweight prospects.

Super lightweight Maximilliano Becerra, who use to train out of Vacaville, CA, will be in action as well. In Becerra’s last bout it looked like he was too eager to trade and got hit a bit, going into this bout, I am hoping to see a bit more defense.

Welterweight Rashidi “Speedy” Ellis is best known for first-round highlight reel knockout of Eddie Gomez, but the Golden Boy prospect has yet to follow up upon that star-making performance as he has lost some of his momentum on his promotional push as none of his fights since have been as dynamic. Ellis will be fighting on in a bout televised from Cancun, Mexico as he faces Alberto Mosquera.

Jean Pascal will return after retiring earlier this year to face former UFC fighter Steve Bosse in a farce of a fight as Bosse only has one fight heading into his bout with Pascal. The bout will serve more so as an exhibition as Bosse is a relative novice compared to Pascal in terms of boxing experience.

I am not made at Pascal for the bout, but it is hard to envision this as a competitive affair unless Pascal just throws everything out the window and just tries to exchange with Bosse in the first round. Bosse has a questionable gas tank, limited technique and not much experience as an MMA fighter or as a pro boxer.

Former light heavyweight world champion Joe Smith Jr. will make his return to the ring after getting his jaw broken by Sullivan Barrera last year on HBO in the bout he lost his world title in. Smith Jr. is a blue-collar working class fighter with some of the most legit power in the division and has a style that can make for entertaining fights in the future.

Women’s welterweight and former world champion Kali Reis will be the co-main event after being broadcast on HBO in her last fight against Cecilia Braekhus in a bout she arguably won. Reis is looking to parlay that great fight into a headline-making performance to earn another shot for a fight down the road with Braekhus.