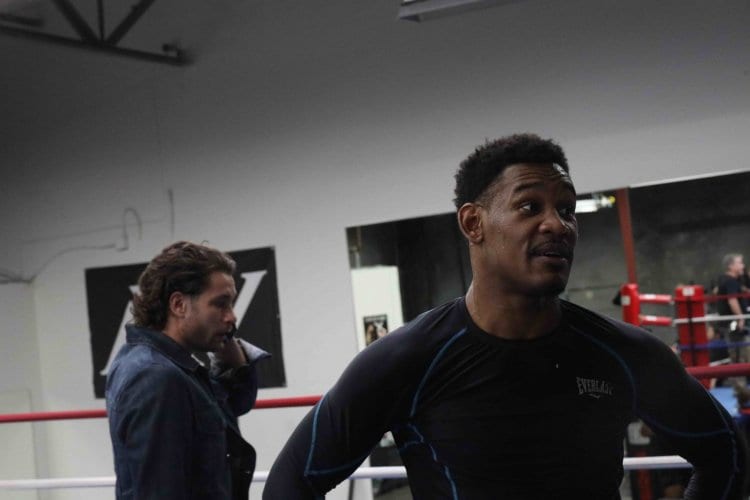 photo: Lukie Ketelle
Daniel “The Miracle Man” Jacobs (34-2, 29 KOs) and Sergiy Derevyanchenko (12-0, 10 KOs) will clash for the vacant IBF World Middleweight Title and Alberto Machado (20-0, 16 KOs) will defend his WBA Super Featherweight Title against Yuandale Evans (20-1, 14 KOs on Saturday, October 27 at the Hulu Theater from Madison Square Garden in New York. The doubleheader will be televised live on HBO World Championship Boxing beginning at 10:00 p.m. ET/PT.
The main event between Jacobs and Derevyanchenko features not just an interesting and competitive bout, but a bout between two former training partners.
Jacobs, fighting out of Brooklyn, N.Y., is coming off wins over Luis Arias and Maciej Sulecki in his last two outings which both took place in New York and were broadcast on HBO.
The ‘Miracle Man’ is gunning to regain his world champion status after losing his world title to Gennady Golovkin in a very close fight that had fans conflicted on who won the bout. Jacobs’ hopes to face the winner of Canelo Alvarez vs. Gennady Golovkin.
“This opportunity for a world title is one I don’t take lightly and I’m preparing myself to be in an incredible fight with Sergey Derevyanchenko. I’ve always felt that I was the best middleweight in the world with this type of fight I’m that much closer to all that glory and to proving to the world I am the best ” said Jacobs
Derevyanchenko has taken this bout extremely serious as he has split with Andre Rozier for this bout as Gary Stark will run his camp out of Big Bear Lake, Ca at The Summit. Derevyanchenko was a touted amateur, compiling an astonishing record of 390-20. Known as “The Technician,” Derevyanchenko is fundamentally sound with superb reflexes, deft defense and devastating power, having stopped 10 of his 12 professional opponents thus far. On top of that, he is avoided as Derevyanchenko was essentially turned away as a Gennady Golovkin foe for the May 5th date, that Vanes Martirosyan ended up getting.
In a final IBF eliminator for mandatory status, Derevyanchenko proved he could carry his power into the later rounds, halting Tureano Johnson in the 12th and final frame of their August 2017 clash on a bout broadcast on FS1. Derevyanchenko is looking to obtain his respect from the boxing world and acheive a life-long goal of becoming a world champion.
“From my time in the amateurs to my pro career, this has been a long time coming for me. I’ve beaten everyone they’ve put in front of me to earn this shot. Having trained with Danny, I know him very well and we are friends. However, it will be strictly business in the ring. I will not be denied. The belt will be mine.”
Jacobs will have his longtime trainer, Andre Rozier in his corner, who also has cornered Derevyanchenko, but for this bout and the business of the bout, will split in order for the bout to happen.
“This is a brilliant match-up, but I strongly believe on October 27 at MSG Danny will be crowned champion and add another chapter to this Cinderella story.” said Matchroom Boxing’s Eddie Hearn, who is helping promote the bout along with fellow promoter, Lou DiBella.
Jacobs vs. Derevyanchenko will top a stacked bill in New York as the main event of a world title doubleheader. In the co-main event, unbeaten Puerto Rican star Alberto “El Explosivo” Machado makes the second defense of his WBA World Super Featherweight title against Cleveland’s Yuandale Evans.
“I feel excited to make the second defense of my title, but this time before all of my Puerto Rican brothers in New York,” said Machado
Not to be outdone, Evans made it clear that he has no intentions of just showing up to this bout without the intention of winning.
“I want to let Machado know that I am taking the belt home,” said Evans.
Golden Boy Promotions CEO Oscar De La Hoya is excited about what the future holds for his fighter Alberto Machado.
“He beat a strong champion in Jezreel Corrales and defended his crown against a tough contender in Rafael Mensah. In both fight, he used his skills and power to obtain the victory, and I’m positive he will do the same against Evans before legion of Puerto Rican fans in New York. I have no doubts he will be recognized as one of the best champions that Puerto Rico has produced.” said De La Hoya.
Topping the non-televised bill is a rematch of the 2016 NBCSN clash between Heather Hardy (21-0, 4 KOs) and Shelly Vincent (23-1, 1 KO) with the vacant WBO World Featherweight strap on the line after Hardy edged Vincent in the first bout.
“One of the saddest things is that in 2016, Shelly and I put on the fight of the year, and so many people missed it,” said Hardy. “We’ve been dying to do the rematch but under the right circumstances. This is a great time for women’s boxing and a great event to showcase the rematch – and I’m going to bring home that title, don’t worry about that.”
“Ever since I was a kid, I wanted to shoot hoops at MSG – now I’m going to get to beat Heather’s ass there,” said Vincent. “
“Finally, Heather ‘The Heat’ Hardy and Shelly ‘Shelito’s Way’ Vincent will get the chance to rematch their 2016 Female Fight of the Year. The first fight was a barnburner, and this promises to be nothing less. The stakes are higher this time, as both women will compete for the WBO Featherweight Championship of the World. A World Championship in boxing has been a lifelong dream for both, and I am thrilled that they will get this opportunity on October 27.” said Lou DiBella, president of DiBella Entertainement.
Tickets are on sale NOW from TicketMaster.com priced from $46, $66, $106, $206 and $356 (ringside).
Tags:Alberto MachadoDaniel JacobsEddie HearnsHeather HardyHulu TheaterLou DiBellaMadison Square GardenMatchroomMSGOctober 27thSergey DeShelly VincentYuandale Evans

Canelo vs. GGG 2 will be shown at movie theaters via Fathom Events