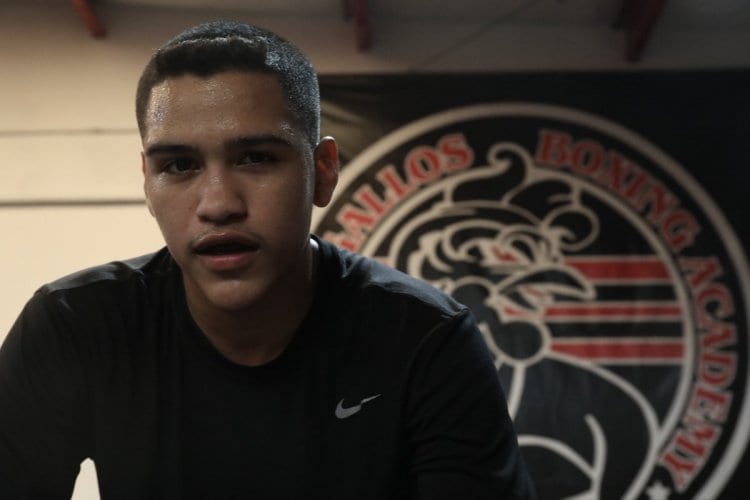 Gabe Flores Jr. might be known to some as the youngest fighter ever to sign with Top Rank Inc, but he is more focused upon his legacy than the impressive feat he accomplished signing with one boxing’s major promoters. Flores Jr., a homegrown Stockton, Ca native, who was raised and trained by his father Gabe Flores Sr., is looking to leave a lasting impact on his community which hasn’t had the best role models for young people to look up to.

CBS News ranked Stockton, Ca as the 10th most violent city in the nation and for a suburb of Sacramento, this is not a good statistic to hold as it is much smaller than other cities listed. Flores Jr. knows firsthand the toll of violence as young child Flores Jr., lost his mother to the violence of Stockton, CA.

“His mom was murdered when he was 12-years-old and his uncles were in gangs, our family was pretty much in gangs, and wrapped up in that lifestyle. He learned from that and he had to deal with a lot of stuff mentally, but it made him stronger and I think that is what made him the fighter he is today.”  said Flores Sr., the fighters father, trainer, and manager.

“For me, I try to let it relax me, motivate me, feel better, knowing that she is there watching me when I am fighting, because she loved watching me fight. I still have videos to this day, of her all yelling, and that is because she loved to see me fight.“ said Flores Jr. when reflecting upon how he reflects upon his mother prior to fight night.

Flores Jr. has tried his hardest to be a role model for young people in Stockton, even at young age, since Stockton has a lot of depictions of negativity, but less seen is that of positivity especially on a national scale.

Flores Jr. shares the same advisor as Ramirez, in Rick Mirigian, and now looks to put on a show facing Roger Gutierrez, a fighter who fought himself out of the club circuit into a big opportunity despite a limited amateur background. For Flores, this is his introduction to the boxing world and he is fully aware of the entertainment aspect of the boxing business. Gutierrez is the next caliber of opponent and Flores Jr. is looking to make a statement on national television on a big fight weekend.

Flores Jr. reflects a new generation, one in which everything is expedited. It is a major change from the past in which a fighter was built up and marinated, the new era of fighters are looking to get to 10-round fights as fast as possible and as young as possible. Flores Jr. is the face of the movement and the movement and as talented a fighter as any in the elite tier of young fighters. In fact, Flores Jr. is more than likely the reason you’re now seeing a lot of fighters turn pro at such a young age, foregoing the Olympics.

Flores Jr., who is more than likely going to headline the Stockton Arena in 2019, is looking for an introduction to the world of boxing as fight fans, who do not typically watch undercards of boxing events, will get the chance to see him a day before Canelo Alvarez takes on Gennady Golovkin on ESPN.

Flores Jr. is a blue-chip prospect with all the tools to be great as well as a solid fanbase and a life story that seems like it was written ripped from a boxing movie. The only thing left is for Flores Jr. to prove it to the world.

Flores Jr. fights September 14th at the Save Mart Center in Fresno, CA, on ESPN.