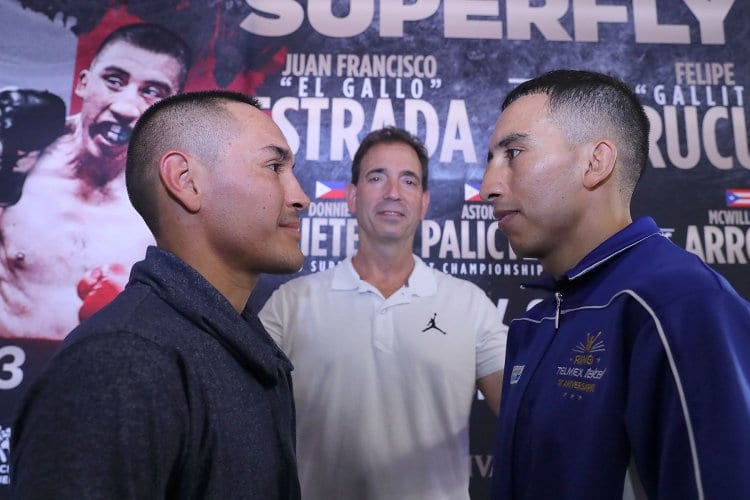 Tom Loeffler’s 360 Promotions has brought the lower weight classes out from the depth of late-night cable television or obscure online videos to your television as his “Super Fly” boxing series will reach its third installment, September 8th at the Forum in Inglewood, Ca, broadcast nationally on HBO Boxing. Loeffler, the promoter behind the Klitschko Brothers, Gennady Golovkin, Roman “Chocolatito” Gonzalez amongst others has had an infinity for the misunderstood and/or under-promoted foreign to the United States fighters and has tapped into something most promoters haven’t, goodwill amongst the fans.

“The fighters in the lower weight class divisions relish the opportunity to be on HBO and that’s why they are willing to fight world class opposition in tough matchups. That’s what makes the SUPERFLY series so great for the fans and why each event has been so successful. We’re expecting a huge crowd next Saturday night at the Forum to see this exciting HBO televised tripleheader along with a tremendous undercard.” said Loeffler.

The concept for the Super Fly series is simple, showcase fighters at the smaller weights, who throw more punches and are more than willing to put on an entertaining fight on HBO since opportunities are few and far between for the smaller weight classes, oh and as mentioned above, they’re willing to fight the toughest competition as well, since the pay scale isn’t all that great compared to higher weight classes. In short, the lower weight division in boxing has been the division of honor, not necessarily the division of monetary compensation.

It also served as a way for Roman “Chocolatito” Gonzalez to get his own headlining events and build up future opponents for the king of the lower weights. This took a detour after “Chocolatito” took two defeats to Sriskat Sor Rungvisai, the second loss being a brutal knockout on Super Fly 2 at the StubHub Center in a result that shocked boxing.

The series now is focusing on lesser known fighters in this installment, but with the built-in fanbase and a fan-friendly promoter, Loeffler, the hope is for this card to exceed expectations live and on HBO while potentially building a future star in the process. The major speed bump for the card was the fact that Rungvisai, the most notable super flyweight currently, is only fighting in Thailand currently, due to what he is calling heartbreak from ending a relationship with his longtime partner. Rungvisai, an unlikely HBO star, was getting a bit of push, but now been off the airwaves since early 2018 when he picked up a narrow decision win over Juan Francisco Estrada.

In Rungvisai’s place is the man, Rungvisai barely beat in Juan Francisco Estrada, who will face Felipe Orucuta in the main event. The bout isn’t nearly as sexy a match-up as the previous two superfly cards, but that doesn’t mean it won’t provide action. Estrada, a consistent quality fighter is coming off a split decision loss to the best in the division, Rungvisai earlier this year, as much a few times prior and hopes to get another shot at Rungvisai with a win. Estrada’s career so far is being defined as almost getting to the big win as his two biggest fights against “Chocolatito” Gonzalez and Runvisai both ended in close losses. This is a platform to change that narrative.

“I’m very happy to be back in Los Ángeles for another SUPERFLY card. I am very proud to headline a big card like this and I hope to give the fans a great fight just like my other two SUPERFLY appearances. Most of all I want to win to keep on track to fight for a world championship in my next fight.” said Estrada.

Felipe Orucuta is currently on a five-fight knockout streak but has struggled against the upper-tier of fighters as his four losses coming to the fighters with the best records he has faced with the exception Enrique Bernache, who he stopped in one round. Essentially, Orucuta is a fighter, who is willing to leave it all in the ring and fight with valor, but has yet to prove he is able to win at the world level.

“This is like a dream come true for me. I am on a fantastic card against one of the best fighters in the world in a legendary venue. It’s the opportunity I have been seeking for a long time. I am very grateful to HBO and Tom Loeffler for making this happen.” said Orucuta, when speaking on the once-in-a-lifetime opportunity of headlining an HBO show.

Featured beneath, the main card is Filipino Donnie Nietes who finds himself in an alarming tough bout despite most overlooking his foe, Aston Palicte.

“I know Aston is taller and younger than me, but I know how to fight tall fighters and my experience will be a big factor in the fight. I am happy for this fight and the exposure that it will bring me. There are a lot of good fighters in the super flyweight division and I look forward to fighting Juan Francisco Estrada, if we both win on Saturday, Sept 8. at the Forum.” said Nietes, a few weeks ago at his media day.

The cautionary phrasing that stands out is that Nietes is already looking potentially at a fight with Estrada when he has a very dangerous and much bigger opponent in front of him. Sure, Nietes is skilled, but hasn’t the most powerful and at a heightened age of 36-years-old, can he afford to even be thinking beyond just this one fight.

“I am the stronger, faster fighter in this bout and I need to take advantage of my height and reach. I believe I can knockout Nietes and make a name for myself with this win. If not by knockout I will get a decision. This is a fantastic fight for all Filipino boxing fans and we will continue the great tradition of Filipino boxing into the ring on September 8 at the Forum.” said Aston Palicte in response as he appears incredibly focused.

The television opener features McWilliams Arroyo, who beats Carlos Cuadras on the last superfly card, as he faces power-punching legend Kazuto Ioka, who is coming out of retirement to face Arroyo. Iota came to the last Super Fly card and was so inspired he decided to box once again to fight on the platform.

Oh, and say you want another super flyweight bout, Bruno Escalante of San Carlos, Ca, take on undefeated Alexandru Marin in a fight that could promote the winner either into an HBO fight on a future super fly card or a fight against IBF super flyweight world champion Jerwin Ancajas. This bout will not be on the HBO televised portion of the card, but rather a stream that will be provided via every form of 360 Boxing Promotions social media accounts, that’ll lead into the main card.

The big question for Superfly 3 is; without a major star on the card or someone coming off a major win can the series on its own, pull in numbers to merit the show a success?

The card on television seems doomed since Danny Garcia vs. Shawn Porter will be competing on Showtime and probably take away a lot of viewers, but my curiosity resides in how the attendance is for the event.

In what is a very competitive and evenly matched card, will the success of this show be vital for future superfly cards to come?

I personally am very excited to attend this card for if nothing else it is endearing seeing terrific fighters who have worked their whole career for respect get treated fairly on a major platform with major media attention.

Super Fly 3 will take place Saturday, September 8th from The Fabulous Forum in Inglewood, Ca. First bout is at 4 PM.