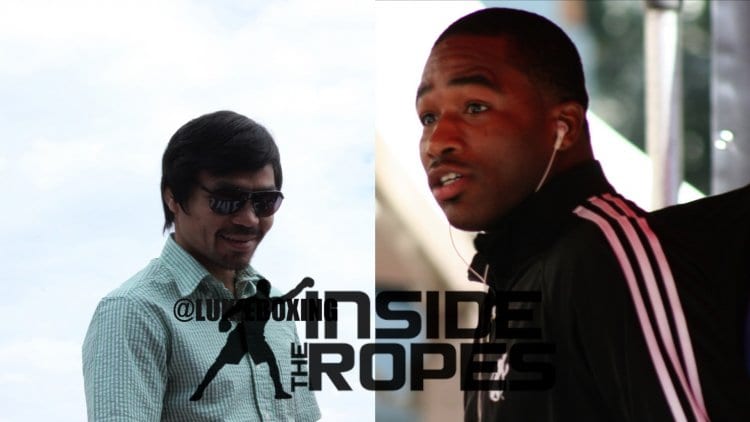 Manny Pacquiao is back! Adrien Broner is on pay-per-view, for the first time ever as a headliner, and the fight happens nine weeks from now, which seems fine, but also seems short considering Thanksgiving is Thursday, Christmas will be in another few weeks and New Year’s Eve, not there long after.

So how’d we get here?

Well, first Manny Pacquiao has had a rocky road over the past few years after his loss to Floyd Mayweather. Pacquiao lost to lesser-known Jeff Horn in Australia, where Horn was from. The outcome saw Pacquiao opt to not train with longtime coach Freddie Roach and instead his close friend Buboy Fernandez as well as Nonito Donaire Sr. Pacquiao would return later this year to knockout Lucas Matthysse on ESPN+, as one of the more publicly acknowledged sporting events broadcast on the ESPN’s streaming service.

Pacquiao since defeating Matthysse has parted ways with his longtime promoter, Top Rank Inc, and now is being advised by Al Haymon, one of the key people involved with Premier Boxing Champions, who has a strong say in programming on Showtime and Fox.

The move to many singled a Floyd Mayweather vs. Manny Pacquiao II bout, but not so fast.

Enter Adrien Broner, one of the bigger stars of boxing, but not for all the right reasons. Broner merits as much attention as any fighter not named “Canelo” Alvarez despite not quite every winning the big fight outside of Broner’s star-making victory over Antonio DeMarco on HBO, years ago.

Broner is now the star, who at times lacks the resume, of one, but his larger than life persona, humorous and outrageous Instagram account and crossover to rap culture have transcended him well beyond the sport of boxing. This bout for Broner is arguably more important as Broner has since losing to Marcos Maidana lost or gotten a draw in every impactful fight since.

Broner is not slowly become boxing’s biggest what if, he already is. In Broner’s last three truly competitive 50-50 pick’em fights, he has lost to Shawn Porter and Mikey Garcia as well as getting a draw with Jessie Vargas earlier this year.

Broner is at the crossroads and Pacquiao, not unlike him is as well.

What’d we learn from the press conferences, well all the same things I think we thought going in.

The last part I think is the most interesting as Manny Pacquiao and Freddie Roach are an iconic duo. To see them back together before Pacquiao calls it quits is endearing and dare I say, a storybook ending, but that is if he wins.

The press conferences most notable and probably ugliest moment came when Pacquiao acknowledged that Roach will be in his corner, Broner wasted no time.

The crowd looked on awkwardly, Broner made light of Parkinson’s disease, the illness Roach suffers from. This statement in nutshell explains Broner as the outrage was muted simply, because Broner comes off even at his worst as a defiant child saying things for attention, but not with the intent to cause real harm.

In the Los Angeles press conference, Jim Gray, the legendary CBS/Showtime broadcaster, even joked that about how few words they said, but essentially said they’d throw a lot more punches.

We also should mention, Broner has looked “A LOT” better since training with Kevin Cunningham, who is forcing him to hear harsh truths in the corner as against Jessie Vargas, Broner looked as motivated as ever in the second half of the fight.

In short, what I learned from this is that the visual of Pacquiao and Broner together was all we needed. Pacquiao has never been a trash-talker, and the language barrier, makes Broner seems uninterested to even escalate any antics.

The fight is also a battle between the past and the present. Pacquiao, from a time when the internet was as popular, social media was much limited and existed in the form of e-mail, etc. Broner is much more in your face, like the modern day social media apps such as SnapChat or Instagram that can update your followers on everything you do.

This to many is a showcase for Pacquiao to get a big rematch with Floyd Mayweather, but on the other hand, this is the opportunity of a lifetime for Adrien Broner, who has all the potential in the world, but never quite has put the performance together to match the interest the world has in his fights.

As we head into the January 18th clash at the MGM Grand Garden Arena in Las Vegas, Nevada, Broner will look to cement his legacy, while Pacquiao will look to further his greatness.

DMITRY BIVOL: THE BOXING STORY WE DON'T KNOW YET