WBC #1 contender in the heavyweight division and 2012 U.S. Olympian Dominic Breazeale (20-1 17KOs) made a statement to beat 2008 Puerto Rican Olympian Carlos Negron (20-2 16KOs) in the opening televised bout from the Barclays Center in Brooklyn, New York.

The bout was tough as Breazeale started out in the hole losing round after rounds getting outboxed as he reached a lot with his punches, especially with his right hand. The end of the third round saw the two exchange punches after the bell as Breazeale punched Negron late after Negron appeared to punch Breazeale after the bell.

The most telling punch of the bout came at the end of the fourth when Breazeale hurt Negron badly when the round ended, which could have stopped the bout. Negron in the second half of the fight looked physically outgunned as Breazeale appeared to be bigger and his pressure impacted Negron, badly.

Dominic Breazeale created the first highlight-reel knockout of the PBC on FOX era, brutally stopping Carlos Negron in the ninth round. The time was 1:35. 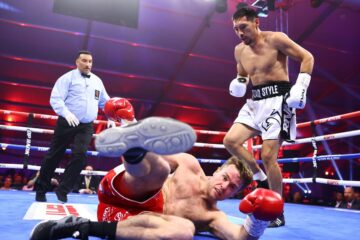