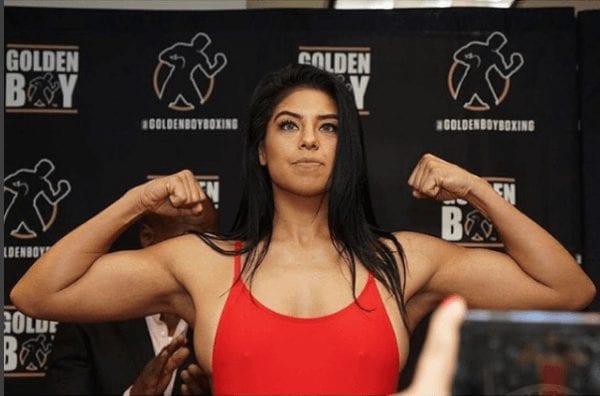 Maricela “La Diva” Cornejo had the biggest fight of her career, the co-main event bout on ESPN, the Thursday before Gennady Golovkin versus Canelo Alvarez II, saw her lose to Franchon Crews-Dezurn in a tough ten-round bout that Cornejo never seemed comfortable in. The bout was for the WBC women’s super middleweight world title.

It was Cornejo’s second loss when fighting for the WBC world title her first coming to Kali Reis, and at this point, most would quit or contemplate something else, but Cornejo isn’t.

Instead, she returns today, well, Sunday, January 27th, at the Avalon in Hollywood, California, in a career trajectory fight against Erin Toughill, a pioneer in women’s MMA, who last boxed professional thirteen years ago, and took an MMA bout eight years ago.

That being said, Toughill is the opponent no one wants to face, an experienced opponent with nothing to lose and she has stayed in the gym, sporting an impressive physique.

Cornejo weighed in at 158.8 lbs, the second lowest weight of her career as she has only weighed that since November 17th, 2012, in a bout in Sacramento, Ca, that I randomly attended live. In comparison, Cornejo had weighed in at 166 1/4 pounds in September of last year, though that might not seem like a lot, that is and that also marks a change in training and eating habits.

The big question is how much is left in either. Toughill’s last boxing bout saw her stopped in the first round, but Cornejo also looked to struggle against the power of Crews, who was much bigger than her. The bout has a lot of answered question, but mostly for Cornejo, who has not stopped training since her loss and assisted Cecilia Braekhus in her world title defense on the final HBO boxing card.

Cornejo has spent this camp in Santa Monica at the Churchill Boxing Club training alongside Marvin Somodio, the famed boxing coach, and Cornejo hopes that this time at a lower weight, she can finally win a world title in the next year or so.

It might not be the best “on paper” fight, but it is also a good test for Cornejo to see where she is at after suffering a harsh loss in her last outing.

Cornejo, who has traveled across the United States in pursuit of her dream will not let a loss define her as she hopes to prove once again she is contender in women’s boxing.