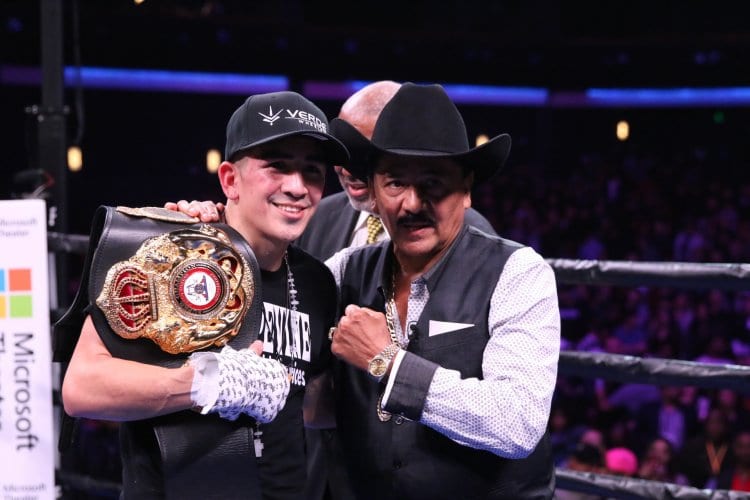 Three division world champion Leo Santa Cruz had to work for it to make his third defense of his WBA featherweight title against a game and tough Rafael Rivera. The bout was all action as Rivera started very fast forcing Santa Cruz to adjust and fight.

The bout showed two things, Santa Cruz is a fast combination puncher who is able to land with incredible accuracy and Rivera had good hand speed and good power forcing Santa Cruz to show his skills.

We had talked about this on the YouTube earlier this week, by the way.

The bout was an all-action affair with Santa Cruz landing the better shots, but Rivera standing in there neck and neck with him as Rivera made a solid showing to show that he was not outclassed on the world level of competition.

Santa Cruz won the bout via a decision with the following scores 119-109 on all three cards.

Omar Figueroa who fought at 145 lbs catchweight after being to make the 140 lbs limit, picked up a surprisingly wide unanimous decision win over veteran John Molina Jr.

The bout was even with Figueroa pressing the action early, but Molina looking to outbox Figueroa. That game plan was ditched by Molina after the second round as a fight broke out. The bout stayed even as Molina and Figueroa both looked to invest in the bodywork to slow the other done, but neither would budge. As the fight aged, Molina landed the heavier punches of the two. The thing was Figueroa refused to go away

After the bout, Figueroa said this

“I thought I won comfortably and aside from some middle rounds I felt like I was in control. He caught me with a wake up punch in the third round. I wanted to test his power because I had heard so much about it. He’s definitely strong and durable and when I hit him with hard shots, he withstood them.”

Six-foot, seven-inch undefeated super welterweight Sebastian Fundora picked up a third-round knockout over undefeated Donnie Marshall to start the televised portion of the card. The first round was even as both kept their hands low and got hit, the second round saw Fundora who had a vicious body attack with combination punches take over and the end came with an uppercut from the southpaw Fundora who floored Marshall. Minutes later, the bout was called on the ropes.