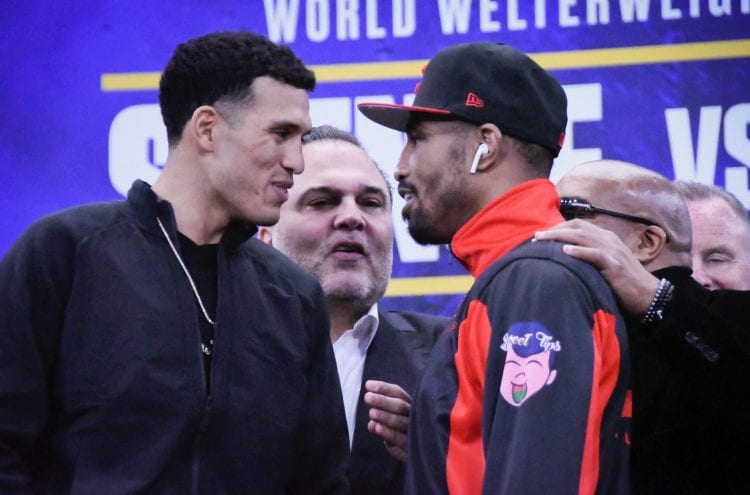 If the main event between Errol Spence Jr. and Mikey Garcia doesn’t have you wanting to reach into your pocket to spend your hard-earned cash for the Fox PPV, this Saturday, March 16th, from AT&T Stadium in Arlington, Texas, the co-main event of David Benavidez versus J’Leon Love, might get you excited after today.

The bout on paper looks like the ideal tune-up fight for David Benavidez, the 22-year-old, former WBC super middleweight world champion, who is fighting for the first time since losing his world title after failing a drug test for a recreational drug.

His opponent, J’Leon Love has other plans.

“I ain’t no bum!” said Love at the press conference today, responding to not just Benavidez’s intimidating glares, but those writing him off.

“I have had my days in this game and a lot of people don’t believe in me, but that is because I believe in myself. That is one thing in the world people don’t get — I was born in this world without no one here, no of you. You didn’t know me, didn’t know my back history, where I came from, what I have been through in my life and I am okay.” said Love in a candid moment on the dais.

Love furthered by saying that he had to face demons in his life and that this fight will be no different. Despite starting respectfully, things escalated quickly.

“I have been on the sidelines, just watching everybody get their glory, a lot of champions I want to face, but first I have to take on J’Leon Love. I feel J’Leon Love’s time has past, I used to watch him fight when I was 14-years-old on Mayweather’s undercards, he didn’t take advantage of his time then so how could he take advantage of now.” said David Benavidez

“If ‘Porky’ Medina put you to sleep, what do you think I am going to do to you?” asked Benavidez

What followed was a back-and-forth exchange in which Love tried to discredit Benavidez’s knockout win over the man who beat Medina, while Benavidez continued.

The end resulted in the two exchanging insults until both got in each others face, leading to a dramatic ending to final media event before the weigh-in, which is merely 24-hours from now.