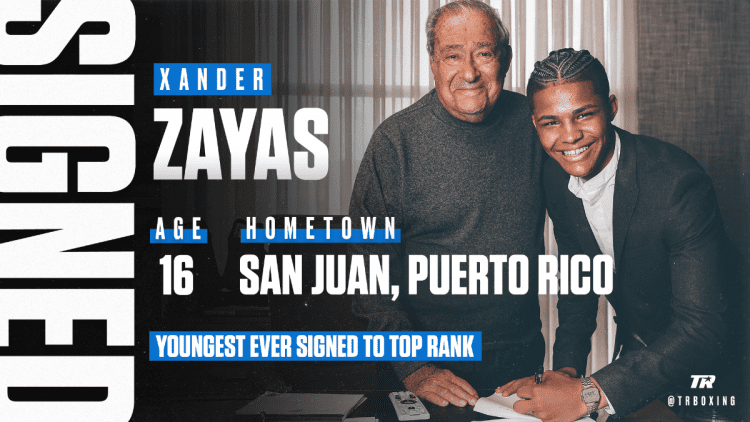 Xander Zayas, born in Puerto Rico and fighting for USA Boxing as one of the world’s top amateurs, has signed a multi-year professional contract with Top Rank.

At only 16 years old, Zayas is the youngest fighter ever to sign a pro contract with Top Rank. An 11-time Puerto Rican and U.S. national champion, Zayas will make his pro debut as a welterweight in September.

Zayas, who is currently 118-14 in the unpaid ranks, will represent Team USA next month at the Emil Jechev Memorial Tournament in Botevgard, Bulgaria.

“Xander Zayas is a tremendous young fighter who is mature beyond his years,” said Top Rank chairman Bob Arum. “He has everything it takes to one day become an international boxing superstar.”

“Growing up watching my idol, Miguel Cotto, it has always been a dream of mine to fight for Top Rank, and today that dream has come true,” Zayas said. “Although I am 16 years old, I have been boxing since I was 5 years old, and I understand the magnitude of what it means to be promoted by the best promotional company in the world. I know I have a long road ahead and will remain focused and hungry while I work hard every day to achieve my ultimate goal of becoming a world champion. It was a surreal experience to meet with Bob Arum, as he provided me with his wisdom and advice as I begin my career. It was a humbling experience, and I am truly grateful for this opportunity.”

“Xander is a special fighter. He is wise beyond his years and understands what it means to be a part of Top Rank as he embarks on his professional career as the youngest fighter to ever be signed by the company,” said Peter Kahn, Zayas’ manager. “We have a strong team to support him inside and outside of the ring as he matures. Xander has all of the tools to be a world champion, and now it’s up to him to go to work and begin his journey as a professional fighter.”

Zayas was born in San Juan, Puerto Rico, and moved to Plantation, Florida, at 11 years of age. A high school junior who will graduate in 2020, Zayas won gold at the 2017 and 2018 National Championships and was named the tournament’s Most Outstanding Boxer in 2018. He elected to turn pro, in part, because he would’ve been too young to participate at the 2020 Olympics.

Zayas will prepare for his pro debut with head trainer Javiel Centeno at Centeno’s Sweatbox Boxing & Fitness in Davie, Florida.

Said Centeno: “I knew that Xander was something special from the first day he walked into the gym. Besides the boxing abilities at such a young age, he had the charisma, work ethic and maturity of a world-class athlete. I was reminded that he made a promise to me early on that he will be the the first champion I developed from the beginning, and now with by far the greatest promotional engine in the sport of boxing behind us, I see us taking that first step in making his words become reality in the near future.”