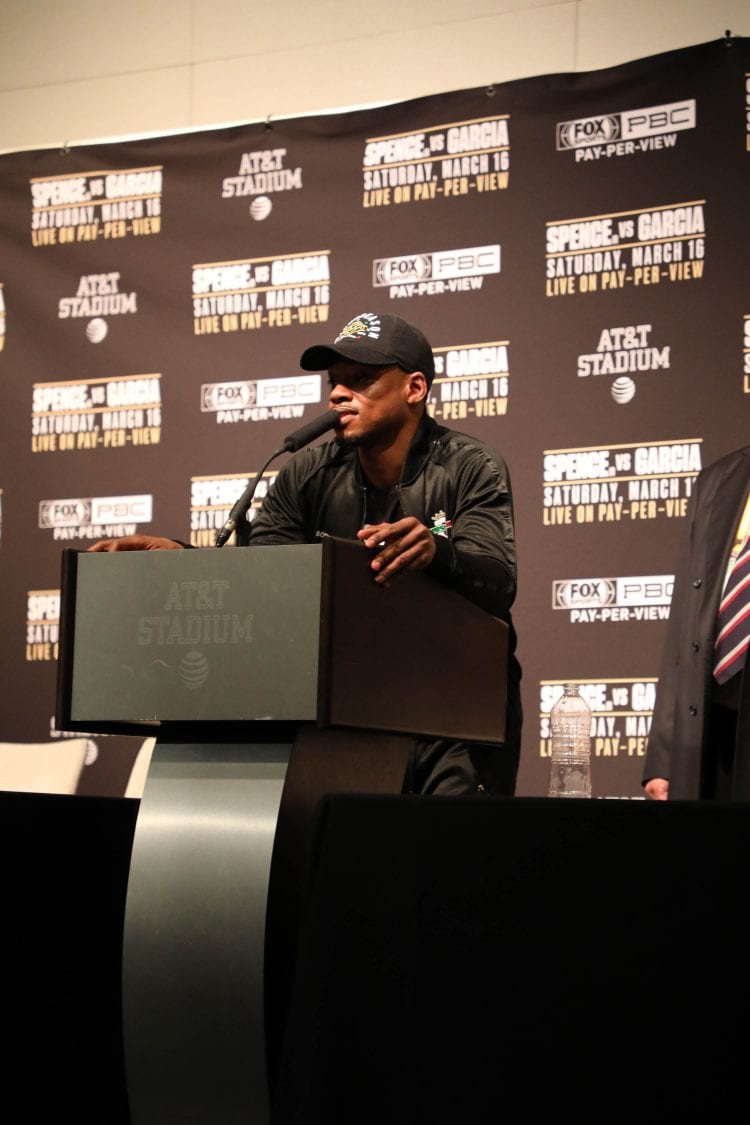 Spence, the current IBF welterweight champion was rather unassuming in the build-up to the fight, the story was more about Garcia moving up to his fifth weight in search of his fifth world title in a new division. Even the walkouts showed the contrast between the fighters as Garcia as was eager and jovial walking to the ring as opposed to Spence who was tense and focused.

“It’s been a long training camp. It was frustrating. Everyone knows I’m a low key guy. If I don’t have a fight coming up you’re not gonna see me. This was something new trying to sell these pay-per-view buys.” said Spence Jr.

The bout you can read about anywhere, it started even. Spence and Garcia matched each other punch for punch, but Spence was bigger and faster, and after about four or five rounds, you could see Spence becoming the first one to punch, more often than not. By the ninth or so, Garcia was showing his but was just outgunned by a younger, bigger man, who was hellbent on not being on the wrong side of history.

“I felt insulted during training camp that people were saying he was smarter than me and I felt insulted that a lot of these reporters were agreeing with them. Top guys like Sugar Ray Leonard and other guys were going for Mikey Garcia. Guys like Marquez and Barrera were going for him. Tyson and Leonard saying Mikey Garcia was going to win and that kinda rubbed me wrong too.”

The conversation leading up to the bout seemed to wake up a sleeping giant, in Spence, who made a statement.

Spence is quietly putting together an amazing career in just six or so years of being a professional. Spence beat IBF welterweight world champion Kell Brook in Brook’s backyard of England, beat Mikey Garcia on Pay-Per-View, on top of being a 2012 U.S. Olympian.

The big question though is, when will Spence get his due? Spence is one of the best welterweights in the world as well as Terence “Bud” Crawford, who seems to be destined to fight each other in a super-fight of sorts, in the near future.

“So many so-called experts were writing me off. Tonight I just wanted to show that I do have boxing ability. I can box. I can use my jab. I do have a high boxing IQ. There was a reason I was an Olympian and wanted to prove I could do that.”

Spence’s first time on PPV was his coup de gras of his career and crowning achveiment as the fight had over 47,000 fans in .

Spence won via a 12-round unanimous decision winning every round, with one judge scoring 10-8 for Spence based on his dominance.

“Nothing but respect for Mikey. I just felt throughout the press tour that he was a little bit too arrogant…his arrogance put a chip on my shoulder.”

After the bout, Spence embraced the idea of a fight with future hall-of-famer Manny Pacquiao in the summer.

Benavidez makes a statement in his comeback bout

Former WBC super middleweight world champion David Benavidez wasted little time stopping Mayweather Promotions’ J’Leon Love with a second-round technical knockout. Benavidez hurt Love in the first round, and stopped him with a flurry of punches in the second round.

After the bout, Benavidez called out Anthony Dirrell, who recently won the title he was stripped off for a drug violation.

Bantamweight Luis Nery used reckless aggression and high punch output to beat , but aging McJoe Arroyo. Nery dropped Arroyo four times in the first four rounds before his corner waived the bout off before the fourth round.

Heavyweight Chris Arreola scored a third round knockout over Jean Pierre Augustin. Arreola was getting outboxed early, but his power was the deciding factor as his early round issues came down to more than likely ring rust.

In a sloppy and ugly heavyweight bout, former IBF heavyweight world champion Charles Martin won via eight-round disqualification over Gregory Corbin in a foul-riddled fight that was awkward, clunky and ugly.

Super lightweight Lindolfo Delgado stopped James Roach with a body shot in the very first round. Delgado has won every fight via knockout so far.

Bantamweight Aaron Morales got a six-round decision over previously unbeaten Fernando Robles in a six-round bout.

Super middleweight Burley Brooks (1-0, 1 KOs) made his pro debut with a first-round knockout over Randy Mast (1-1).

Various Photos from the event