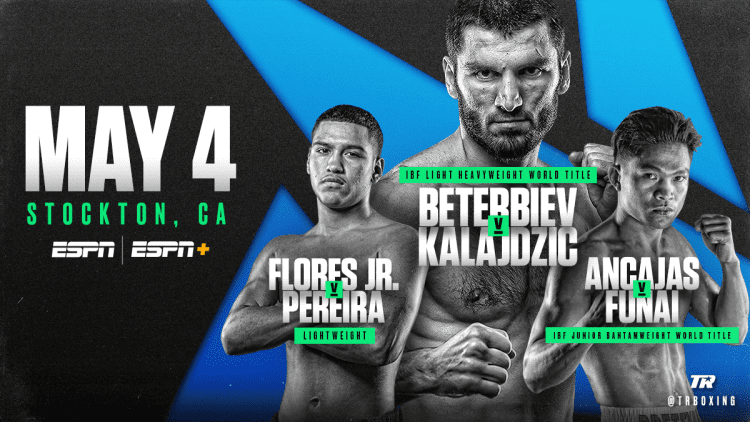 IBF light heavyweight world champion Artur Beterbiev, the only current world champion with a 100 percent knockout ratio, will take his iron fists to California for the second defense of his title.

Beterbiev, who recently signed a long-term pact with Top Rank, will face top contender Radivoje “Hot Rod” Kalajdzic in the main event Saturday, May 4 at Stockton Arena. In the co-feature, Jerwin “Pretty Boy” Ancajas, the world’s longest-reigning 115-pound world champion, will make the seventh defense of his IBF junior bantamweight title against No. 1 contender Ryuichi Funai.

And, in a six-round lightweight special attraction, 18-year-old Stockton native and blue-chip prospect Gabriel Flores Jr. will face off against Eduardo Pereira.

“Top Rank is really excited to bring big-time boxing to Stockton on May 4,” said Top Rank chairman Bob Arum. “The light heavyweight championship between Beterbiev and Hot Rod will be a thrilling brawl. Gabriel Flores Jr. will have the opportunity to perform before his hometown fans, and we welcome Jerwin Ancajas back in a great fight against Funai.”

“I am very excited to defend my IBF light heavyweight title on May 4 against a high-quality opponent like Radivoje Kalajdzic,” Beterbiev said. “This will be a great fight, and I can’t wait to get in the ring and show once again why I am the best 175-pound boxer in the world.”

“I’m thrilled to get this opportunity to challenge for a world title against a great fighter like Artur Beterbiev,” Kalajdzic said. “It will be a very exciting fight. Both of us hit hard, so expect fireworks. I am focused on securing a victory and will take full advantage of this shot. A win opens so many doors for me and will change my life. On May 4, the light heavyweight division will have a new world champion.”

Beterbiev (13-0, 13 KOs), a 34-year-old native of Russia, turned pro in 2013 following an amateur career that included a pair of European Championships gold medals and a gold medal at the 2009 World Championships. In only his sixth pro bout, he knocked out former world champion Tavoris Cloud. He won the IBF crown in November 2017 with a fourth-round stoppage over Enrico Kölling in Fresno, California. Beterbiev defended his belt the following October, recovering from a second-round knockdown to stop Callum Johnson in the fourth. Kalajdzic (24-1, 17 KOs) has won three in a row since a highly controversial split decision loss to Marcus Browne, including a fifth-round stoppage over then-unbeaten Travis Peterkin.

Flores (12-0, 5 KOs) was one of the great U.S. amateurs in recent memory, a boxing prodigy who signed with Top Rank in 2016 at the age of 16. He became the youngest fighter ever to sign a pro contract with Top Rank and will turn 19 three days before his bout against Pereira. He went 6-0 in 2018 and last fought on Feb. 10, cruising to a six-round unanimous decision over Alex Torres Rynn. Flores is returning home to raise awareness for bullying in his community, a cause that is near and dear to his heart.

“I was born and raised in Stockton, and it is the city I still call home. To get the opportunity to fight at the big arena in front of my friends, family, and biggest fans is a dream come true,” Flores said. “This is only the beginning of my journey. One day, I will fill up that arena as a world champion. I am excited to use my platform to show kids that bullying is unacceptable and that we must treat everyone with dignity and respect.”

“This fight card in Stockton is two-and-a-half years in the making,” said Rick Mirigian, event organizer and Flores’ adviser. “This gorgeous arena sits on the waterfront, and Stockton is a real fight town. Look for fireworks from Flores Jr. in his homecoming in what will be the biggest televised sporting event the city has ever seen.”

Ancajas (30-1-2, 20 KOs), a 27-year-old Filipino native, has been one of the most active world champions in modern boxing, defending his belt three times apiece in 2017 and 2018. Unbeaten in 18 fights dating back to 2012, Ancajas is coming off a competitive draw versus Alejandro Santiago and is seeking to rebound against Funai (31-7, 22 KOs), who has won seven consecutive fights. A native of Tokyo, Funai is a former Japanese super flyweight champion who earned top contender status last June with an eighth-round KO over Warlito Parrenas. In his last bout, he knocked out Victor Emanuel Olivo in the second round to extend his KO streak to three.

“I was hard at work three weeks after my last fight with Santiago,” Ancajas said. “I am going to be in the best shape in my upcoming fight with Funai. Coming off my last fight, I really want to give a great performance and defend my world title in style for the fans in Stockton and everyone watching on ESPN.”

“I am excited for this opportunity to challenge for a world title and to make my professional debut in America,” Funai said. “I know I have the experience and the skills to become the new IBF champion of the world. Jerwin and I respect one another, but this is boxing, and I am going to fight my heart out.”

Jaron “Boots” Ennis Stops Sergey Lipinets in Six, Hasn’t Been Past Six Rounds As A Pro