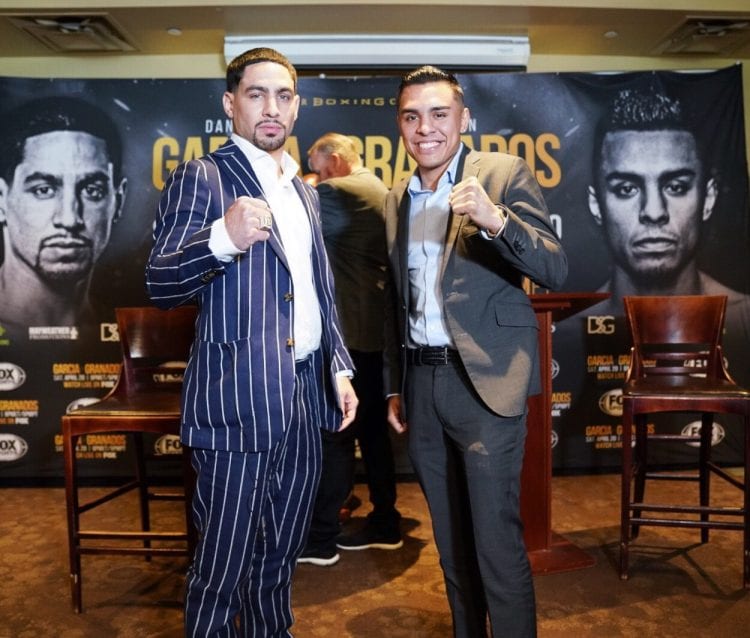 Tickets for the live event, which is promoted by TGB Promotions and Mayweather Promotions, in association with DSG Promotions, are on sale now. Tickets can be purchased at AXS.com or at the Dignity Health Sports Park box office from 10:00 a.m. to 6:00 p.m.

The April 20 broadcast begins at 8 p.m. ET/5 p.m. PT and features heavyweight contender Andy Ruiz Jr. taking on Alexander Dimitrenko in a 10-round bout in the co-feature and unbeaten contender Brandon Figueroa battling Venezuela’s Yonfrez Parejo in a 12-round match for the WBA Interim Super Bantamweight title.

Here is what the press conference participants had to say Tuesday from the Palms Restaurant Downtown L.A.:

“I’ve been training hard. I’ve seen Granados fight a few times and I know what he can do. I’m excited to be back in Los Angeles, because this is where the stars fight. This is another fight that can get me to where I want to go in my career.

“My mentality is that I have to stop Granados. Nobody has stopped him and I have to do that to make a statement. He’s never fought a counter puncher like me and I’m definitely the hardest puncher he’s faced. I’m going to showcase everything to get the stoppage.

“This is another fight for my legacy. There have been a lot of great fights in my career and this is another important one for me. I know he’s coming to fight, but I’m looking to make this one of my easiest wins.

“He’s a tough and aggressive fighter who likes to throw a lot of punches. He’s hungry, and that’s the type of guy that you have to watch out for. I’ve got to handle my business against Granados before I look to any bigger fights.

“This is a big platform for me to perform on. I’m going to show the world why I’m one of the best fighters in the world.

“This is going to be a great fight. We’re two fighters who bring it. I’m coming for a victory in dominating fashion. This is the fight that I’ve wanted for a while now.

“I haven’t had the easiest road and that’s why I’m looking to get my respect in this fight. I’m looking forward to this. It’s going to be a barnburner. May the best man win.

“If he’s underestimating me it will definitely be a big mistake on his part. I don’t think he will though. I think he realizes now he’s in for a fight. If he didn’t know me before, he does now. I’m going to give him a piece of my mind April 20.

“I was never taken care of coming up. I always had to work harder to get to where I’m at. Danny and I basically had the same accolades in the amateurs, and I always gave him kudos for what he’s done in his whole career, but he doesn’t know what I’ve gotten through to get here.

“I’m coming to get my respect in this fight. I’m going to make Danny fight and see what he’s made of. I’ve always had a chip on my shoulder but being able to take out a fighter like Danny is motivating me to another level.”

“Premier Boxing Champions has made a major commitment to bringing some of the best and biggest fights to Southern California. We started with the Wilder vs. Fury heavyweight title fight downtown in December and we’re back again in April at the Dignity Health Sports Park. This is the premier outdoor boxing venue in the United States and we have a great show there on April 20.

“Danny Garcia is a throwback fighter. A first-ballot Hall of Famer in my opinion. At 140-pounds he took on the best in the division and never backed down from a challenge. Danny was a 2-1 underdog when he fought Lucas Matthysse, and we knew what happened after, he proved the doubters wrong. I’m so excited to have him back in California on this great card.

“Adrian Granados could arguably be sitting up here with a record of 27-1, since all but one of his losses have been by split or majority decision, and usually it’s in his opponent’s backyard. He’s a battle-tested veteran who’s made a name for himself bringing action-packed fights to the fans. When we announced all the PBC on FOX fights, this is the one that I circled.”

“This is going to be a terrific fight. I’ve really been looking forward to this fight because I’ve known these guys for a long time. Styles make fights and in this particular matchup, we have two fighters who are all action.

“Danny has shown that he’s an elite fighter, because he’s beaten a number of great world champions. Adrian Granados always comes to fight. He’s never ever in a boring fight. The styles mesh so well, with Danny being a world class counter-puncher and also being a superb boxer. Granados is going to force Danny to fight on the inside a lot more than usual.

“I think this fight is going to bring the best out of both Danny and Adrian. They’ve both fought a number of very good fighters and been in involved in numerous debatable decisions. They’re going to have to leave it all in the ring come April 20.”