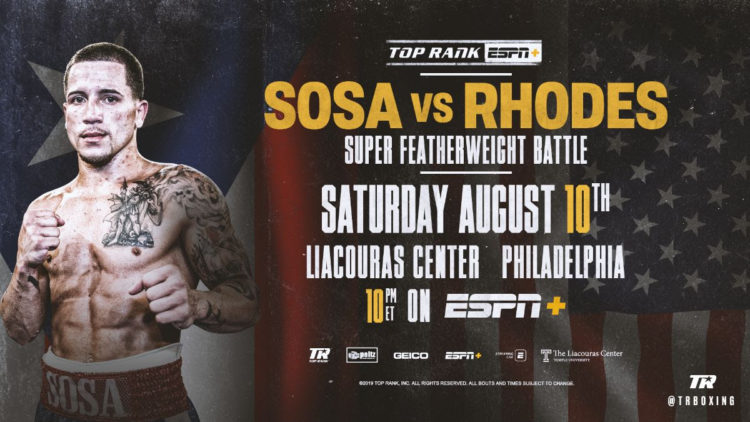 What a weird week for Top Rank.

Carl Frampton, a former featherweight world champion, who had two fantastic bouts with Leo Santa Cruz, suffered broken bones from a freak injury in the hotel lobby while having coffee on fight week, Monday to be exact.

One man’s loss is another’s gain, as former 130 lbs WBA world champion, Jason Sosa will now headline the card as a Camden, New Jersey native, and managed by hall-of-famer J Russell Peltz, who has had a foothold on Philly boxing for decades if not centuries. Sosa, who is signed with Top Rank, now main events this Saturday’s card at 10 PM EST, from The Liacouras Center from Philadelphia, Pennsylvania, broadcast on ESPN+. Sosa is also trained by “Chino” Rivas, who to put it mildly is a great coach.

What makes Sosa inspirational and unique is that he amassed something to the fact of less than ten total amateur fights before becoming a pro. In short, Sosa should be an opponent, but taking chances and winning the right fights have changed his career.

Sosa isn’t a boxer, he is a big, strong guy, looking to impose his will. Sosa is a fighter who thrives on chaos and makes more talented fighters have to fight his fight. Sosa is the veteran that most prospect or matchmakers are not keen on having their unblemished record prospect face.

That being said, Moises Delgadillo, a barometer respectable opponent, who trains hard, but is outgunned at the world level, dropped him in his last outing. Sosa was originally set to face fellow big puncher, Erick De Leon, but that bout fell apart, and now he will face Haskell Lydell Rhodes, whom most refer to as Lydell Rhodes.

Rhodes, who at-one-time was with Mayweather Promotions, but a slew of losses to Sergey Lipinets, Edner Cherry and Omar Douglas now have Rhodes looking at his last shot to get to the world title as the 31-year-old, now will go on the road looking to give it his all and hope also that the wars of the past, have diminished Sosa’s career.

The bout now serves as the main event of ESPN+ telecast from The Liacouras Center from Philadelphia, Pennsylvania, with middleweight knockout artist Edgar Berlanga, Philly heavyweight Sonny Conto, and 2x-Olympic gold medalist Robeisy Ramirez will also be featured on the undercard.