Emerging Stockton Boxing Promoter, Toscano Boxing Promotions, based out of Stockton, California, run by Jorge Toscano, with Israel Guajardo serving as the head of day-to-day operations, have burst on the scene, and created a solid following, and now are seeing their first wave of fighters get close to a form of title contention as tonight they will be promoting a show in Mexico, live on PPV, as the promotion has hopes of furthering their fighters’ careers to big fights and opportunities, even during a time when smaller promoters have struggled.

The card will feature super featherweight Manuel Jaimes, lightweight Giovannie Gonzalez, and lightweight Wade Jones III, all of whom are Stockton residents, amongst a slew of other fights on a very lengthy fight card.

Jaimes, who has been with the promotion since their first show, actually turning pro on Toscano Promotions first promoted card is now 9-0 with 8 KOs. Training at the Stockton PYA with longtime boxing coach, Steve Salas, Jaimes is looking to beat yet another quality opponent early in his career as he is entering into double-digit wins with no losses meaning every win he obtains from this point onward sets up opportunities on big stages in the near future. Jaimes is a volume puncher, but his biggest strength is conditioning as he tends to drown opponents with activity and movement in later rounds as he is a cardiovascular freak athlete, who seeming can keep a consistent pace for the whole fight.

Jaimes opponent in the six-round bout will be Francisco Julian Rodriguez Rubio (9-1-1, 7KOs), a fighter who has fought exclusively in Mexico, and has fought between 130-135 lbs.

Lightweight Giovannie Gonzalez (10-5, 8KOs), has had a rough road as a professional, as outside of building a record of 4-0, Gonzalez has found himself on the b-side in a few match-ups that proved unfruitful such as facing MT Sports’ Jerry Perez, Willie Shaw and Golden Boy Promotions’ Elnur Abduraimov. Gonzalez has had two split decision losses in his three fights one to Ivan Pinto in a razor-close fight and one to Ricardo Valdovinos, both of which were difficult bouts to score and Gonzalez nearly stopped both opponents in the fight.

Gonzalez is a battle-tested veteran who can upset an undefeated fighter with his power, and toughness. Gonzalez has also shown improvement since working with Marco “Chino” Arroyo.

Gonzalez will face Brandon Cortez (5-0, 4KOs), an unheralded fighter Tijuana, Mexico, who’s confidence is at an all-time high. For Gonzalez to make a run as a stern test for a signed fighter in the future a win over the inexperienced Cortez, who has yet to face an opponent who has won a fight in the professional, this will be needed.

Lightweight Wade Jones III will face Alberto Guzman Ante (3-2, 1KO) in a four-round bout. Ante had just faced Manuel Jaimes, who stopped him in five-rounds, so this will be an assessment of Wade Jones’ development, as he trains with Leonal Salas out of Team Nasty boxing, in Stockton, Ca. Wade Jones is a talented fighter, but should best be thought of as a “will fighter” as his will typical forces others to fight his fight, a physical bout. Jones had sparred with 154 lbs decorated fighters for this camp as well

To order the PPV go to https://globalsportsstreaming.com/ppv, with the PPV priced at $9.99. The undercard starts at 6 PM PST 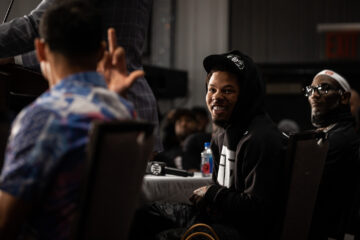