Jose Zepeda vs. Ivan Baranchyk – The Best Fight Ever. 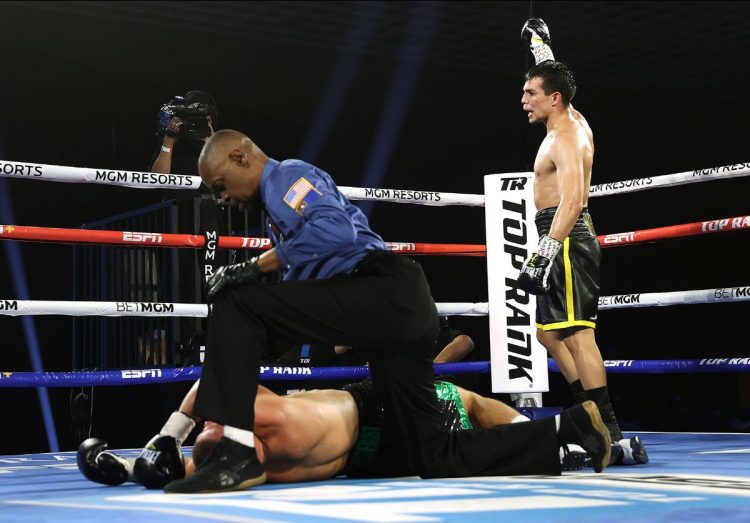 It is fitting on that on my birthday, cheap plug for myself, that I am writing about one of the best fights I have ever witnessed, and I don’t have to squint my eyes, watching it in standard definition, as it happened last night.

Jose Zepeda knocked out Ivan Baranchyk in five rounds, after they each knocked each other down a combined eight times. In fact, in every single round of this fight, someone was knocked down.

This is the type of fight that if you’re not in it, you enjoy it, and the type of bout that takes years off a fighter’s life. For that reason, we need to adequately remember this fight as well as elevate the status of both fighters in the collective boxing world for what they contributed for our enjoyment.

Baranchyk, a hard-nosed puncher from Russia, best described as a brute, with a mauling pressure style, was coached by Pedro Diaz, but in all sincerity has bounced around between camps for his professional career, is known for one thing pressure, well and big-punches landing on his opponent. Baranchyk is as far from a polished fighter as they come, but offsets that with some of the hardest blows to land on another man’s chin ever seen on God’s green earth.

Zepeda, on the other hand, a hard-puncher himself, who reinvented himself as a tricky southpaw, resurrected his career beating Jose Pedraza, and giving Jose Ramirez the toughest fight of his career. This resurrection of Zepeda saw him sign with Top Rank, and now look like the heir-apparent to a vacant title at 140 lbs, once Jose Ramirez and Josh Taylor vacate the division.

But enough of the foreshadowing back to the fight.

As the two met in the ring right after boxing sensation, Gabriel Flores Jr., had just picked up another impressive win. Zepeda and Baranchyk gave a career-defining bout that probably shortened both fighters’ careers, but in the same breath made them immortal defeating the test of time. The bout which combined the beauty of fine art and the violence of war was the exact mix of why all of us who are drawn to this sport, and love it so much.

That being said, despite seeing photos of Baranchyk leaving the hospital and seemingly in good cognition, an eerie fact remained – the fighters are spectacle only to most observers it seems. Baranchyk was hurt badly, motionless for what seemed like minutes, yet the next day few and far between, asked about the condition of Baranchyk, and even if he is fine now, how will he be in months or years later of this bruising affair that saw him leave a piece of himself in the ring.

Fans love to see brutal fights, but need to support fighters who put themselves through the ringer if they love those bouts as not everyone beats the boxing game and walks away with a paid-off house and a solid credit line.

Thus, why the fight held both sides of the shotgun for me. It was the greatest fight I had ever seen, and it was also one of the scariest as Baranchyk laid down in the ring, I thought back about the absurdity of punches he absorbed in the fight. Than reflected upon he took more in the gym, was dropped against Abel Ramos, had a hard fight with Josh Taylor, and this was all within 30-seconds of thinking, not even researching.

We know what we sign up for in this business, but it still won’t change the fact – that when you see the devastation it ain’t shocking. I knew Maxim Dadashev, and that outcome hit home, this type of events are sadly happening more and more frequently, and I am not numb to it. When a guy with an unconventional style that abandons defense for offense is on the ground for a long period of time, something is really wrong.

Just look at this quote from Zepeda after the bout.

“I know I’m tough. I didn’t know how tough I was. Tonight, I showed myself, too. I’ve never been in a fight like this. It was a great learning experience.” said Zepeda.

When do you ever hear a boxer speak like that?

I think why Zepeda vs Baranchyk is so great is not just the action, but the fact that had a little bit of everything of the sport of boxing, will, skill, and our bloodthirst thrill. The morbid ending was the only fitting way for such a fight to end since it showed just how courageous and bold both had to be to fight like this, and why this fight will not be duplicated again.

Kasir Goldston - Why Mazzi Is Wise Beyond His Years

Jose Zepeda vs. Ivan Baranchyk – The Best Fight Ever.