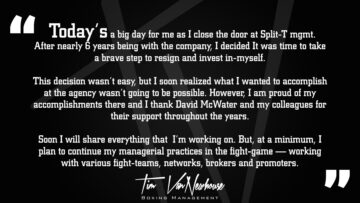 In a statement released via social media, on the young boxing power broker’s social media platforms, Tim VanNewhouse, largely considered one of the central forces of Split-T Management outside of head honcho David McWater, stepped down officially today via a press release. Rumors had circulated for roughly a week, but