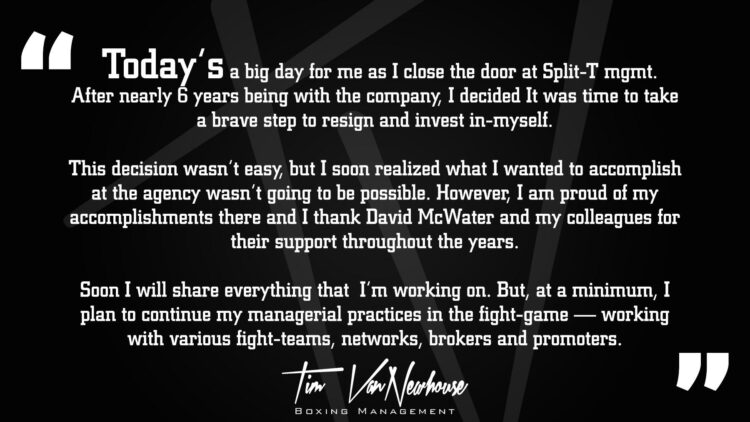 In a statement released via social media, on the young boxing power broker’s social media platforms, Tim VanNewhouse, largely considered one of the central forces of Split-T Management outside of head honcho David McWater, stepped down officially today via a press release.

Rumors had circulated for roughly a week, but nothing we felt comfortable reporting, as people’s business should not be put on display for the general public unless they allow it first and foremost.

“Today’s a big day for me as I close the door at Split-T Mgmt [SIC],” said VanNewhouse via a Twitter post. “After 6 years being with the company, I decided it was time to take a brave step to resign and invest in myself.”

The news comes after Split-T Mgmt had their most successful year as a company, with homegrown boxer, Teofimo Lopez becoming a star after beating generational talent, Vasyl Lomachenko. The aftermath of that fight has seen Lopez and Top Rank on not so level ground as Lopez’s next bout will be on upstart boxing entity, Triller Fight Club, and not on an ESPN and Top Rank card.

A press release in January showed, and rightfully so, a Split-T grand slam in terms of 2020 boxing awards. Teofimo Lopez was the fighter of the year, Ivan Baranchyk, signed to Split-T, received fight of the year with his bout against Jose Pedraza, and Teofimo Lopez Sr. was the trainer of the year, along with David McWater himself receiving manager of the year.

For most people this is boring, and to be honest, it is pretty boring to me as well. This is basically industry news, but I never got into boxing to make friends or any of that, so why does this matter?

VanNewhouse is a well-connected guy, who will end up somewhere, and will be in some form of power broker, at some point in his career. It will also be interesting to gauge how his absence will effect Split-T, as VanNewhouse from the outside looking in, offered the boxer’s perspective being a former fighter himself.

Per BoxRec.com, Split-T has 62 fighters (give or take my counting skills), with VanNewhouse listed as co-manager on ten or more.

It is very clear at this moment, Split-T is at the forefront of the sport, and being at the forefront of the sport, comes more eyeballs, and with eyeballs comes attention, security, and pressure. Tiger Woods, the greatest golfer to ever live, embodies this when he named his yacht, Privacy, seemingly after something Woods could never get after becoming who he was destined to be after his first major victory at The Masters in 1997, demolishing the field, only comparable to Ray Floyd’s win in 1976.

Teofimo Lopez is one of the most interesting stories in boxing, Lopez is compelling, entertaining in-and-out of the ring, as well as one of the few boxers who seems up to talk about what is occurring in his life. Lopez is a star, and anyone around Lopez will now get the star treatment for better or worse.

As 2021, eclipses its first quarter, the story has been how boxing needs to be revamped – and the public wants more fights it is invested in. Triller has begun to occupy this space tapping into nostalgia, using the 20-year-rule (bring back people or brands from twenty years prior, when young people grow into a person with seemingly money to spend), as they have promoted a fight with cultural icons Mike Tyson and Roy Jones Jr., as well as cultural anti-heros, like Jake Paul, and Ben Askren. Triller is getting people emotionally attached when sports fans, have given up trying to follow the illogical sport of boxing, when other sports offer more compelling competition in the forms of playoffs, in which see the best facing the best.

Not to bury the lead, but VanNewhouse is new era of manager, young guys guide young fighters careers, and his departure, will mean something, at some point, but only time will tell what that is.

Why do We Love Boxing? Reflections On The Sport I Love... 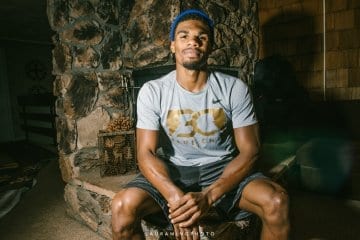