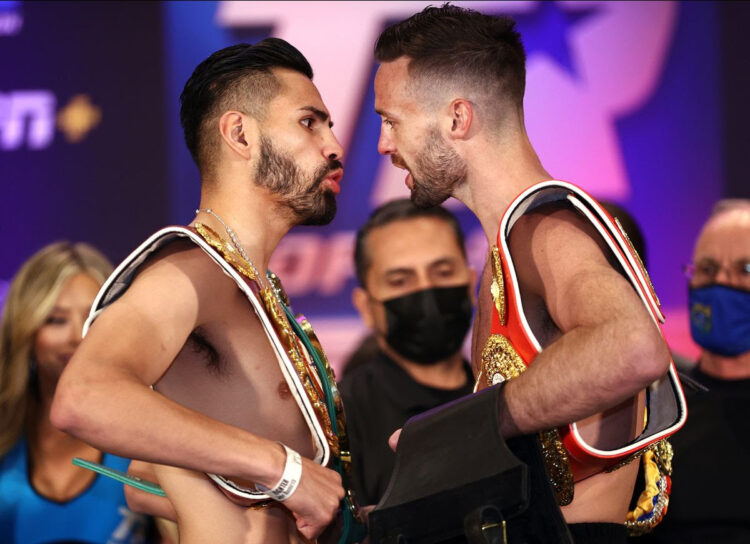 “The Tartan Tornado” Josh Taylor became a legend tonight in only his eighteenth fight, becoming the first man from Scotland to unify all four belts in the super lightweight division, only the second undisputed world champion from Scotland matching hall-of-famer Ken Buchanan, as Taylor outpointed Jose Ramirez via a 12-round decision to become the undisputed super lightweight world champion, capturing all four major titles, by the scores of 114-112 for the WBA/IBF/WBC/WBO on Saturday, May 22 at The Theater at Virgin Hotels Las Vegas.

Pride was on the line as unified world champions Josh Taylor and Jose Ramirez didn’t want to be the first one to make a mistake, as the first rounds were tense, but enjoyable as this was truly a high-level prize fight, worthy of the praise it got prior. As we edge into the second round the story of the fight was simple, can Taylor stay on the outside, and can Ramirez close the gap. Early it was the speed of Taylor that was not allowing Ramirez to close the distance.

Ramirez put pressure on Taylor in the third, as he changed the sequences he entered with and had some of his best moments on the ropes forcing Taylor to withstand a heavy offensive onslaught. The two encompassed what we thought this fight would be, two high-level fighters unwilling to go backwards as Ramirez proved the better on the inside.

Another story of the fight was the left hook from Taylor which landed early to the body of Ramirez, a telling blow. Another were the rabbit punches from Taylor which also oddly seemed to occur far too often for one’s liking. That being said, through four rounds, it appeared to be dead-even.

In the fifth, Taylor was cut by his left eye, the same eye that as of this fight was opened up for the sixth time in his career, as Taylor is older than the amount of fights on his record.

The sixth round saw Taylor land the punch he had been talking about all week the strong left hand as he floored Ramirez, as Taylor looked to counterpunch the world champion and land something specular, but only to see Ramirez land a slew of great punches as an early Taylor round, ended once again with Jose Ramirez pushing the action.

Halfway through this fight these two world champions were too stubborn to lose, and us, the fans, loved every minute of it.

In the seventh, Taylor began to land the cleaner punches as the big shots Ramirez had taken looked to show its wear on him, as Ramirez was still pressing, but with not much trickery. Minutes later, a left uppercut from Taylor dropped Ramirez again.

The eighth round saw a tough world-champion in Jose Ramirez not fully back getting beaten on by a tough, hungry fighter in Josh Taylor, who was eager to punish Ramirez who was focused more on getting his senses back than offense, as Ramirez was down by four rounds, heading into the ninth round.

By the ninth round, it was clear, Taylor didn’t want to win the fight, Taylor wanted to stopped Ramirez as Taylor set his feet, looking for a big punch.

Taylor’s left hand was the story of the hand whether it was to the body or a pull-counter, Ramirez never found a way to stop the punch of Taylor. Yet, the tenth saw Ramirez land something big, that rocked Taylor at the end of the bell.

The final two rounds saw what we saw at the start of the fight, two proud champions fighting to keep what they had earned the hard way. In the end, the knockdowns proved too much for the Avenal, California fighter, Ramirez, to overcome, as Josh Taylor did what other greats did, win on foreign soil.

The bout started out slow. Lundy moved and provided a tough target as Zepeda was patient, targeting the body of Lundy who took the fight on three weeks’ notice, as Lundy’s balance seemingly looked different from previous fights.

For Zepeda coming off the fight-of-the-year against Ivan Baranchyk, the slow start was a bit of a letdown given the momentum Zepeda had from his last fight. The third round saw a confusing situation in which Lundy seemingly landed a big punch only for it to be called a slip.

Zepeda looked like he left a bit of his career in the Baranchyk fight, but it is important to know that Zepeda took two tries to make weight yesterday, and quite as possibly could’ve had a terrible weight cut as he looked drained at the weigh-in. Lundy exploited the willingness of Zepeda to follow him around the ring as Zepeda allowed Lundy to fight a fight that favored Lundy’s style and age. Zepeda could never separate himself from Lundy in this bout, something many pundits wanted to see from a fighter close to a world title shot.

Zepeda was cut from a punch from Lundy in the sixth round that was below the left eye of Zepeda. My good friend Sean Zittel of FightHype.com summed up the fight in a tweet with the following “….uneventful fight.”

The fight did nothing to help the stock of a top-5 140 lber Jose Zepeda, who looked bored at times as Zepeda might have taken Lundy lightly given the performance, while Lundy impressed me more with his ability to stay in this focus and challenge Zepeda for the whole fight.

Super lightweight Elvis Rodriguez in the early rounds was not fond of Sims Jr., active jab, as Rodriguez was not able to set up his signature left hand and power punching combinations, that trend never ended. Sims Jr. made it evident that Rodriguez had grown accustomed to throwing mostly power shots, and Sims’ jab, along with shots coming at different speeds mixed with the fact that Sims had the faster hand speed, seemed to be a major roadblock for Rodriguez who couldn’t adjust. Sims’ didn’t do anything groundbreaking, he just showed solid footwork, a good boxing IQ, and exploited weaknesses in Rodriguez’s skillset, which tonight we learned more about.

Andre Ward highlighted the major issue with Elvis Rodriguez currently is two-fold, Rodriguez needs to work on his jab, and Sims Jr. was seeing the punches coming since they all arrived at the same speed. Fellow broadcaster, Tim Bradley Jr., stated on the telecast, Rodriguez throws a lot of the same combinations over and over again, and Sims Jr. was able to predict the combinations after a few rounds. Add to the fact that when Sims pressed Rodriguez in round seven, Rodriguez was very limited on the inside.

For Sims Jr., a product of the ShoBox: The Next Generation developmental circuit, this win makes years of sparring world-class fighters like Shakur Stevenson and Terence Crawford, waiting for his moment, worth it. Sims Jr., who holds two losses on his record, now holds one of the biggest upsets on his ledger as well with his father, and longtime coach/friend Kay Koroma there to celebrate with him. Sims Jr., who was known for starting to fast, and gassing out, had his marquee win and to see the joy on his face was priceless.

What the fight furthered was in-ring experience for Rodriguez, who many felt had the chance to be a boxing superstar but is still is developing as a professional, as he is being guided by one of the best offensive coaches, Freddie Roach. Rodriguez’s flaws were on full display against a more seasoned pro tonight, but this isn’t a death sentence to the career of Rodriguez, who can fix things and become a formidable fighter.

Sims Jr, now becomes a player in the division, and seemingly could face a top 140 lber next like Jose Zepeda or Arnold Barboza Jr.

The king of the undercards, lightweight Louie Coria, who trains with Robert Garcia engaged in a highly entertaining back-and-forth bout, losing a close-and-disputed decision to Jose Enrique Vivas, who is trained by Manny Robles. The two exchanged early and often as a big left hook by Coria in the third round dropped Vivas. The two would continue to fight as though they were paying for parking by the minute, as punches were thrown like insults on the internet. Vivas appeared to win the fourth but lost a point for low blows, which made his comeback round, only a small salvo shot, rather than a thudding roar.

Coria might not become a household name in the sport, but his honest after against Olympic gold medalist Robson Conceição and Adam “Blunose” Lopez, have been bouts many considered “Fight of the Year”-type fights, as Coria who is not the most god-gifted fighter, leaves everything he has in the ring, for each bout.

In the end, Vivas or Coria versus Andres Cortes, who fought in the same division, and the same duration of rounds, that being eight, could be an interesting bout. That being said we hope to see Coria get respect from the fans after constantly having crowd-pleasing fights.

2019 Olympic Trials winner in the middleweight division, Javier Martinez sent a statement to the whole division as in only four fights, Martinez stopped a game, and upset-minded veteran in Calvin Metcalf, who holds a win over former Top Rank fighter Joe Louie Lopez. Martinez, a swarming volume puncher has seen critics question his power, but the Robert Garcia trained fighter now is riding a two-fight win streak beating two opponents, who have given trouble to young prospects. Martinez is now back to where he was when he turned pro, as being viewed as one of the best fighters in America from this amateur crop of fighters.

The knockout occurred in the fourth-round of a scheduled six at 1:33.

“I am excited about that knockout. Going into the fight, I was looking for a knockout as he was never stopped in 16 bouts. I did my thing ,and I am glad I got him out there. I am getting used to the pro style, and the sky is the limit. I am looking to get back sometime in August,” said Martinez after the fight per a press release.

Featherweight Robeisy Ramirez defeated Ryan Allen, but the urgency was not shown in this bout. Allen, who is a Las Vegas, native who has sparred Ramirez in the past, saw Ramirez, rely upon his boxing skills, and conditioning to outpoint a tough Allen. Ramirez, who is a two-time gold medalist, is in need of something to catch up to the great fighters in his division, as his career has been stop-and-go so far. An overarching theme for Ramirez is lack of urgency, which is the reason he lost his pro debut as well. Ramirez won via a unanimous decision with the scores of 60-53 (x2) and 59-54.

Robert Garcia had a thing for KO’s on this undercard as lightweight Raymond Muratalla stopped Jose Gallegos in a spectacular fashion. Muratalla is currently riding a six-fight KO streak and holds wins over formidable developmental opponents, a step-up bout should be in his future. The fifth-round stoppage occurred at 1:40.

Lightweight Andres Cortes showed good maturity in a dominant win over Eduardo Garza, despite a strong final eighth-round from Garza. Cortes just needs to continue to win, and he will find himself in a big fight. Cortes won by a unanimous decision with the scores. Cortes spent the majority of his career prior to 2020 fighting on Mayweather Promotions cards, but since the pandemic, Cortes has been featured on two Top Rank shows, with this being his second. The unanimous decision win for Cortes was received with the scores of 77-75 78-74, 79-73.

The Fight Is For Us - Jose Ramirez vs. Josh Taylor