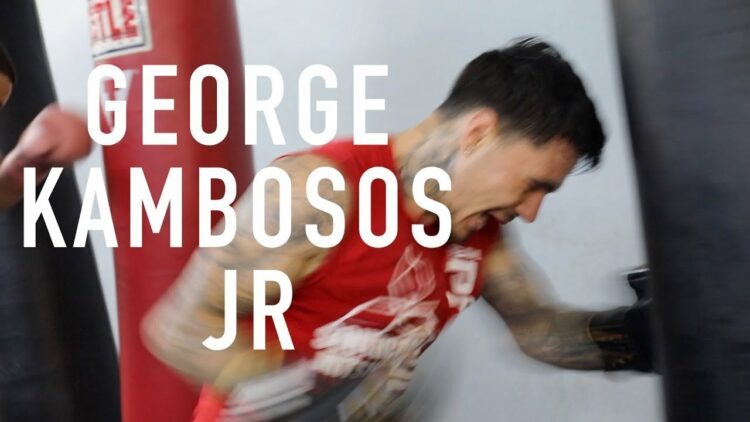 Where: Miami’s loanDepot Park, home of the Miami Marlins

How To Watch: 5:00 pm PST with the live PPV main card starting at 6 pm PST, more info at TrillerFightClub.com

Most of the pre-fight build-up has been about the return of Teofimo Lopez, as Lopez is a favorite against George Kambosos Jnr, who is the IBF lightweight mandatory, and now finds himself in the historic fight. With all the drama, between Teofimo not fighting on a Top Rank card after defeating Vasyl Lomachenko, as well as, seemingly every lightweight fighter calling out Teofimo Lopez, not a lot of people are looking beneath the surface at Kambosos Jnr, who has been grinding with Javiel Centeno, in Florida, and now is looking to shock the world.

Looking beneath the surface, Kambosos Jnr had roughly 100 amateur fights with 85 wins, traveling from Australia to countries like Armenia, for international competition. The Kambosos story is not the common one, as his family hails Sparta – for those who are not akin to world history, the Spartans were known for one of the most legendary armies the world had ever seen and has been depicted in movies such as “300“, depicting the legendary battles of the Spartans.

“Lomachenko didn’t throw enough punches in the first six rounds, I will be much better than that
against Lopez. Lomachenko had been out for 400 days,” said Kambosos. “…that wasn’t really him in the ring, it was more like half of a Lomachenko. Lopez got lucky in a very close fight. I saw a lot of holes in Lopez’s game that I
will exploit on June 19.”

Amongst the many tattoos on Kambosos Jnr’s body is one sporting the a Spartan phrase, “Never retreat, never surrender”, a tribute to the Spartan warriors from his bloodline.

In preparation for Manny Pacquiao’s bout with Jeff Horn, broadcast on ESPN, and taking place in Australia, Kambosos was the chief sparring partner for Pacquiao, Kambosos became one of the Filipino boxing legend’s main sparring partners from that point forward.

“I’ve sparred over 250 rounds with Manny Pacquiao,” said Kambosos Jnr. “[Pacquiao] told me if I’m as good against Lopez as I was in the gym against him that I’ll be victorious and take home all the belts.”

Yet, despite accolades, a good reputation in the game, and an undefeated record, it wasn’t until Kambosos Jnr’s 14th professional fight, that he would find a major U.S. promoter, DiBella Entertainment, hard to believe now, as just sixth fights later, Kambosos would be becoming a millionaire in his bout with Teofimo Lopez, headlining a pay-per-view. This was around the time, Fight Game Advisors, CEO, Peter Kahn became involved in Kambosos’ career, as Kahn has guided Kambosos to career-high paydays, and the best opportunities of his career.

“I’d like to thank Lou for this opportunity to join such a successful American boxing promotional company, my U.S. advisor Peter Kahn for the hard work behind the scenes with this contract and my father and manager, Jim Kambosos, for securing these opportunities,” said Kambosos in a press release roughly three years ago. “American boxing, welcome Ferocious Kambosos!”

Signing with DiBella allowed Kambosos to now get on American cards, frequently, and work towards a world title, fighting veteran Rey Perez on the Manny Pacquiao versus Adrien Broner undercard, in one of his most marquee bouts as a professional, up until that point. Around this time is when Kambosos relocated to Florida and began training with Javiel Centeno, who developed Top Rank prospect, Xander Zayas from the ground up.

Kambosos Jnr. would take a fight in Greece for his 17th bout, stopping relatively unknown Richard Pena, in a showcase fight, but also a major fight for Kambosos Jnr, based on his family history in Greece.

Kambosos Jnr has had only had two fights since his homecoming in Greece, as he faced former world champion Mickey Bey, and won a split decision, and followed that up by beating Lee Selby by split decision for the IBF eliminator to become the mandatory for Teofimo Lopez.

“Lopez is a fugazi, a fraud, a fake. He’s got a fake persona filled with contradictions. Two months ago, he
was talking about how gone Pacquiao was, now he’s all over him because of the Spence fight
announcement,” said Kambosos Jnr towards Teofimo Lopez at his media day “I’m more Brooklyn than Lopez is. He’s not from Brooklyn, he’s from here in Davie, FL where he went to school. It’s just a fake persona saying he’s from Brooklyn.”

Kambosos Jnr is a fighter’s fighter, the times he has struggled in bouts in which his opponent have tried to stay on the outside and use an active jab to nullify the action, Kambosos is a constant entertainer, and will press the action.

According to SportsBettingDime.com the odds opened with Lopez around a -750 favorite and have ballooned to -1411, on average. The challenger is just north of +700 on average and as long as +800. When the method-of-victory props are posted, expect Lopez by decision to be the odds-on favorite. Two of his last three have gone the distance; his 75% KO rate is middling; and Kambosos, an undefeated, top-ten lightweight, went 12 rounds with Lee Selby in December and has never touched the canvas.

The 8-1 odds are the same odds that Muhammad Ali faced when defeated Sonny Liston in 1964 as an 8-to-1 underdog.

The scouting report on Kambosos Jnr is that he is fast, with good power, but at times, can get into a pattern of following fighters around the ring falling in love with one big punch, which he certainly has if it lands. Working with one of the emerging coaches in boxing, Javiel Centeno for multiple camps before the biggest fight of his life.

“We’ve got a great game plan,” said Kambosos Jnr when talking about his game plan set in motion by Javiel Centeno of Centeno’s Sweatbox Gym. “When I fight its full tunnel vision and there’s no way I’m not coming out victorious. I won’t be over-emotional at what he’s said leading up to the fight.”

Meek Mill once said chance are not given, but they’re taken like interceptions, a reference to the NFL, but Kambosos Jnr, has taken this moment into his hands, winning the fights he has needed, and now has what any athlete from any sport can ask for; the opportunity to see what their best effort will merit in an ideal situation.

Kambosos is underdog for a reason, as Teofimo Lopez, is a tour-de-force in boxing, as he has taken over, and smashed the concept of prospect-to-contender by beating the boogeyman of the division, Vasyl Lomachenko, as well as tough proven world champions like Richard Commey, and veteran tough guy Masayoshi Nakatani. By the way, all that occurred in basically two years, during the time, he was still being viewed as an emerging fighter by the media and general public. Kambosos Jnr, hasn’t faced those type of guys, yet, and upon stepping up, hasn’t separated himself, which can be seen by the judges seeing the fight split in his favor.

That being said, sometimes guys are big fight fighters, and Kambosos, when I met him in 2019, felt like a rise to the moment guy. This is Kambosos Jnr’s moment to go down in boxing history, and it doesn’t hurt that his coach, has had experience with Teofimo Lopez in the past, when Lopez lived in Florida.

“The perfect victory for me is just win, by any means necessary.”

Teofimo Lopez vs. George Kambosos Jnr, will be a pay-per-event that will take place on June 19th, which can be seen on FITE.TV, as the four-hour show, which will kick off at 8:00 pm EDT with the live PPV main card starting at 9 pm EDT.