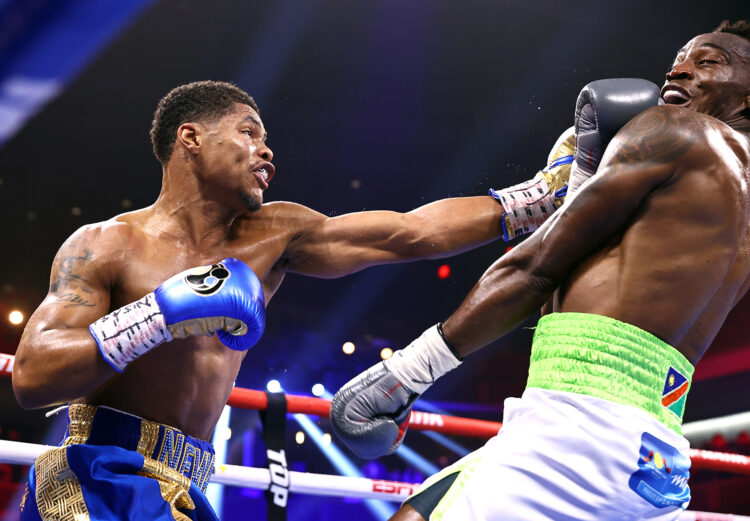 Shakur Stevenson wins a form of the 130 lbs world title

Shakur Stevenson defeated WBO junior lightweight mandatory opponent, Jeremiah Nakathila for the WBO super featherweight interim world title, on Saturday from Las Vegas, Nevada. The bout was uneventful, Shakur controlled distance, but the length and seemingly power of Nakathila, had Stevenson throwing only one-to-two punches at a time, and Nakathila was far too tough to be stopped by just single shots.

Stevenson dominated dropping Nahathila three times, but only getting credit for one of the knockdowns, but Stevenson looked uninspired against an opponent no one had heard of prior. Stevenson learned tonight that winning, and entertaining are not one in the same, and potentially to be a big draw in the sport, you will have to mix the two.

So what do we make of this performance, the underlying theme of Stevenson being a defense wizard stays true, as the generational talent Stevenson, only was hit 9% by his opponent, an amazing defensive achievement. The bout reminded me of two modern fights, Floyd Mayweather vs Phillip N’dou, and Demetrius Andrade versus Walter Kautondokwa, bouts that saw untraditional fighters have some success on much more talented fighters based on length, dimensions, unconventional punches and awkward movements.

Nahathila is a heavy-handed puncher, who got Stevenson’s respect, and Nahathila’s boxing IQ was higher than what he was capable of doing in the ring, as he matched Stevenson’s movements, and his length and power kept Stevenson’s timing off. Nahathila proved that he was the #2 guy in the WBO for a reason, and though not the most fundamentally sound fighter, he was able to throw right hands, come forward, and be tough. One adjustment Nahathila made was Stevenson had early success with the overhand left, only to see Nahathila eat it and exchange a right hand of his own.

The skill difference was noticeable, but Nahathila’s will to win made it so he was not going to be stopped. The fight will be a good experience for Stevenson, who is a young fighter, with the boxing IQ of an old man, conversely trained by his grandfather, Wali Moses, so maybe that is where his old soul comes from, but Stevenson is still growing and maturing in the ring.

Stevenson was compared to Floyd Mayweather on the telecast, which I feel is a disservice as Stevenson fights in my opinion, more like Pernell Whitaker, in which he is an elusive tactician, with less power than Witaker, but harder to hit without having to rely on athleticism.

Jose Pedraza shut the door on Julian Rodriguez, who looked confused and outclassed by the veteran, despite at the time of the stoppage all three judges having it 77-75 for Pedraza, I saw the fight much wider. Pedraza controlled the tempo and rhythm of the fight, as well as his jab landed at will on Rodriguez, which accumulated to massive swelling on his eyes, especially the left eye.

To sum up this fight-up in a social situation context, Rodriguez was the boxing version of a man, who entered a room and shared too much about himself while someone else sat quietly, and took notes on each trait. Pedraza did a lot with a little, as Rodriguez fought in a manner that looked like he was trying to be too quick and tense, as Pedraza, read the style, and adjusted, even giving up the third round seemingly to lull Rodriguez into a false sense of security.

Pedraza, used good movement, and as well as timing to use Rodriguez’s aggression against him, and by the fifth round, the fight felt inevitable that Pedraza was in firm control.

Pedraza, a two-division world champion, now will look to get the big names at 140 lbs such as Teofimo Lopez (if Lopez moves up), Arnold Barboza Jr., Jose Ramirez.

Things went from bad to worse for 140 lbs prospect, Elvis Rodriguez, who trains out of Freddie Roach’s Wild Card Boxing Gym, as a few weeks after losing to Kenneth Sims Jr., Mike Coppinger of the Athletic reported that Rodriguez is no longer with the industry leader, Top Rank. Rodriguez will surely find a new home, but losing an industry-leading promoter after such a big loss hurts even more. This could also be due to two things, further blowback from COVID-19 net losses and trying to create a profitable 2021, and 2021 being an Olympic year, making way for new talent.

I’d like to see Bauza vs. Josue Vargas in the near future as a prospect versus prospect bout.

2012 and 2016 Olympic Gold Medalist Clarresa Shields won her professional MMA debut against Britnney Elkin, but it wasn’t without an honest effort from Elkin. Elkin was able to take down Shields earlier and often in the first two rounds as one of Shields’ biggest weapons, her aggressive temperament proved costly early in the fight as her eagerness to land upon Elkin allowed Elkin to score takedowns.

That being said, Shields has a controlled rage that comes out during the fight, that has been there since her amateur career, but the chaos of MMA personified it. Despite having two shaky rounds, Shields stopped her opponent in the third round by stopping a takedown, and landing violent uppercuts, and as she battered her opponent until the ref stopped the bout.

For Shields, who is learning MMA while competing at this level, this was a solid pro debut, with a lot to like and a lot to learn from. The biggest positive was how calm she stayed while in the foreign element of grappling, the biggest downside was how a sub 500 MMA fighter, Britnney Elkin, entering the fight on a three-fight losing streak won two rounds against Shields before getting stopped.

Not to be outdone, seven-division world champion Amanda Serrano scored a first-round stoppage of Valentina García in Los Mochis, Mexico, as Serrano has greatly improved from her MMA debut that was a draw. Serrano is now 2-0-1 in MMA, as two of the best women’s boxers, are now vying for the best offers from both sports. Serrano is a generational great. Most impressive Serrano won via a submission.

Well, the Lewis Ritson experiment is over. Jeremias Ponce knocked down Lewis Ritson in the 10th round three times before the fight was called off, as Ponce had won every minute of the fight prior. Ritson decided to come forward on a puncher, and just got beat up. Ritson had a cool look, and seemed like a compelling figure in the sport, but the truth is Ritson isn’t able to win at the world-class level.

Ponce will more than likely fight Subriel Matias in the future for the vacant IBF super lightweight title, if Josh Taylor were to vacate the division. Matias would be the favorite.

Manuel Gallegos of Mexico defeated Roy Jones Jr-trained Kevin Newman II in Los Mochis, Mexico. The bout on UFC Fight Pass that many will never see will be marred for those that did by the odd two point deductions to Newman, one for a punch behind the head, and the other for holding, which seemed like a really petty penalty.

Gallegos did enough to win with the two-point deduction, but Newman had Gallegos hurt in the mid-rounds, as Gallegos used his volume to sway the fight. This is a bittersweet moment for Gallegos who will probably via against a top-American prospect, and for Newman II this is going to be a moment in which he has to deeply consider what his situation is moving forward.

Celeb boxing is getting weird, as seemingly helpless former pop star, Aaron Carter, was beaten up by former NBA player, Lamar Odom in a bout that was nothing short of bizarre. You can watch below.

So Much Boxing Next Week….

Another notable subplot is that Teofimo now amended his contract with Top Rank meaning that he will fight on a ESPN+ PPV on October 2nd, which was announced on the telecast this past weekend.

Naoya Inoue vs. Michael Dasmarinas will take place on ESPN. Inoue is one of the most exciting power-punchers in the lower weight classes, and is often compared to Nonito Donaire in terms of power and timing for the lower weights, and is top-ten pound-for-pound fighter. Also on the card, Mikaela Mayer vs. Erica Farias in which Mayer will defend her WBO junior lightweight title for the first time, and a great featherweight bout between Adam “Blunose” Lopez and former world champion Isaac Dogboe will open the televised card.

Jermall Charlo is one of the best fighters in the world, but is having trouble getting fights as Juan Macias Montiel is fresh off stopping James Kirkland, but will be facing Charlo in Charlo’s hometown, and in Charlo’s prime of his career. Both Charlo brothers are must-see action as always, but this is a fight you will tune-in to see Charlo, essentially. A beloved underground boxer, Isaac Cruz will face former world champion Francisco Vargas, in what could be his graduation to the world title conversation, and Angelo Leo returns after losing his belt to Stephen Felton, to face Aaron Alameda, who played the role of a solid spoiler to Luis Nery last year.

Stockton-based Toscano Boxing Promotions, which has been making heavy inroads in Mexico, throwing a lot of shows in Mexico, will look to go to the next level with a PPV with Mexico legend, Julio Cesar Chavez Sr., taking on Hector Camacho Jr., in an exhibition bout. The most compelling bout on the card, Julio Cesar Chavez Jr. versus former UFC middleweight world champion Anderson Silva, in a battle of two aging superstars. The only other notable bout on the card that stands out to me is Damian Sosa vs Abel Minu for the WBO NABO 154 lbs title, if Sosa, who is signed to Toscano Promotions wins, he will be in the top-15 of the WBO’s world rankings, and should land a big fight.

Former world champion, who is well past his prime, Felix Sturm will return against undefeated 24-year-old James Kraft. Sturm defeated Timo Rost in his return last year, who was undefeated.